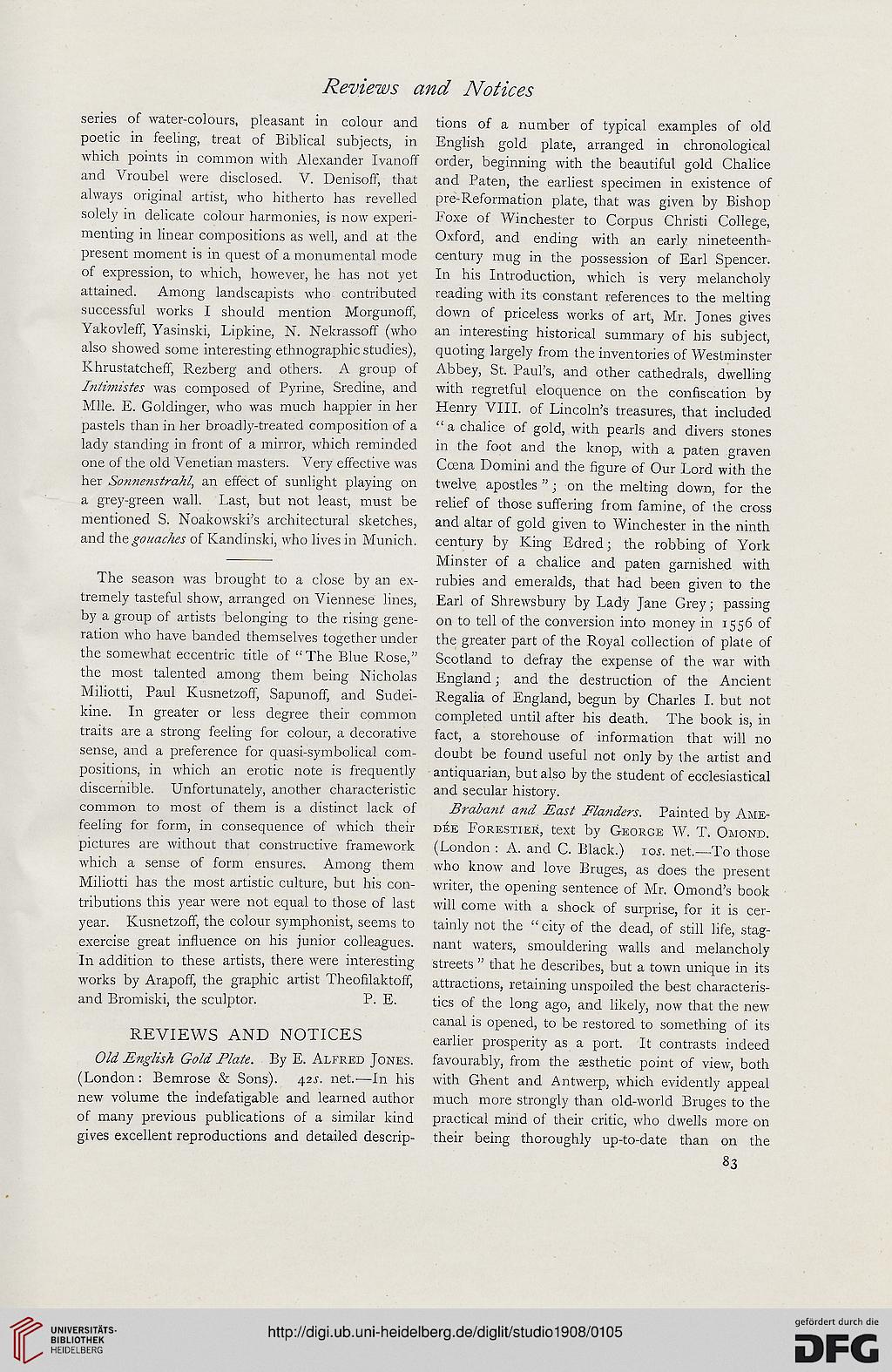 series of water-colours, pleasant in colour and
poetic in feeling, treat of Biblical subjects, in
which points in common with Alexander Ivanoff
and Vroubel were disclosed. V. Denisoff, that
always original artist, who hitherto has revelled
solely in delicate colour harmonies, is now experi-
menting in linear compositions as well, and at the
present moment is in quest of a monumental mode
of expression, to which, however, he has not yet
attained. Among landscapists who contributed
successful works I should mention Morgunoff,
Yakovleff, Yasinski, Lipkine, N. Nekrassoff (who
also showed some interesting ethnographic studies),
Khrustatcheff, Rezberg and others. A group of
Intimistes was composed of Pyrine, Sredine, and
Mile. E. Goldinger, who was much happier in her
pastels than in her broadly-treated composition of a
lady standing in front of a mirror, which reminded
one of the old Venetian masters. Very effective was
her Sonnenstrahl, an effect of sunlight playing on
a grey-green wall. Last, but not least, must be
mentioned S. Noakowski's architectural sketches,
and the gouaches of Kandinski, who lives in Munich.

The season was brought to a close by an ex-
tremely tasteful show, arranged on Viennese lines,
by a group of artists belonging to the rising gene-
ration who have banded themselves together under
the somewhat eccentric title of "The Blue Rose,"
the most talented among them being Nicholas
Miliotti, Paul Kusnetzoff, Sapunoff, and Sudei-
kine. In greater or less degree their common
traits are a strong feeling for colour, a decorative
sense, and a preference for quasi-symbolical com-
positions, in which an erotic note is frequently
discernible. Unfortunately, another characteristic
common to most of them is a distinct lack of
feeling for form, in consequence of which their
pictures are without that constructive framework
which a sense of form ensures. Among them
Miliotti has the most artistic culture, but his con-
tributions this year were not equal to those of last
year. Kusnetzoff, the colour symphonist, seems to
exercise great influence on his junior colleagues.
In addition to these artists, there were interesting
works by Arapoff, the graphic artist Theofilaktoff,
and Bromiski, the sculptor. P. E.

tions of a number of typical examples of old
English gold plate, arranged in chronological
order, beginning with the beautiful gold Chalice
and Paten, the earliest specimen in existence of
pre-Reformation plate, that was given by Bishop
Foxe of Winchester to Corpus Christi College,
Oxford, and ending with an early nineteenth-
century mug in the possession of Earl Spencer.
In his Introduction, which is very melancholy
reading with its constant references to the melting
down of priceless works of art, Mr. Jones gives
an interesting historical summary of his subject,
quoting largely from the inventories of Westminster
Abbey, St. Paul's, and other cathedrals, dwelling
with regretful eloquence on the confiscation by
Henry VIII. of Lincoln's treasures, that included
" a chalice of gold, with pearls and divers stones
in the foot and the knop, with a paten graven
Ccena Domini and the figure of Our Lord with the
twelve apostles " ; on the melting down, for the
relief of those suffering from famine, of the cross
and altar of gold given to Winchester in the ninth
century by King Edred; the robbing of York
Minster of a chalice and paten garnished with
rubies and emeralds, that had been given to the
Earl of Shrewsbury by Lady Jane Grey; passing
on to tell of the conversion into money in 1556 of
the greater part of the Royal collection of plate of
Scotland to defray the expense of the war with
England; and the destruction of the Ancient
Regalia of England, begun by Charles I. but not
completed until after his death. The book is, in
fact, a storehouse of information that will no
doubt be found useful not only by the artist and
antiquarian, but also by the student of ecclesiastical
and secular history.

Brabant and East Flanders. Painted by Ame-
dee Forestier, text by George W. T. Omond.
(London : A. and C. Black.) 105. net.—To those
who know and love Bruges, as does the present
writer, the opening sentence of Mr. Omond's book
will come with a shock of surprise, for it is cer-
tainly not the " city of the dead, of still life, stag-
nant waters, smouldering walls and melancholy
streets " that he describes, but a town unique in its
attractions, retaining unspoiled the best characteris-
tics of the long ago, and likely, now that the new
canal is opened, to be restored to something of its
earlier prosperity as a port. It contrasts indeed
favourably, from the aesthetic point of view, both
with Ghent and Antwerp, which evidently appeal
much more strongly than old-world Bruges to the
practical mind of their critic, who dwells more on
their being thoroughly up-to-date than on the