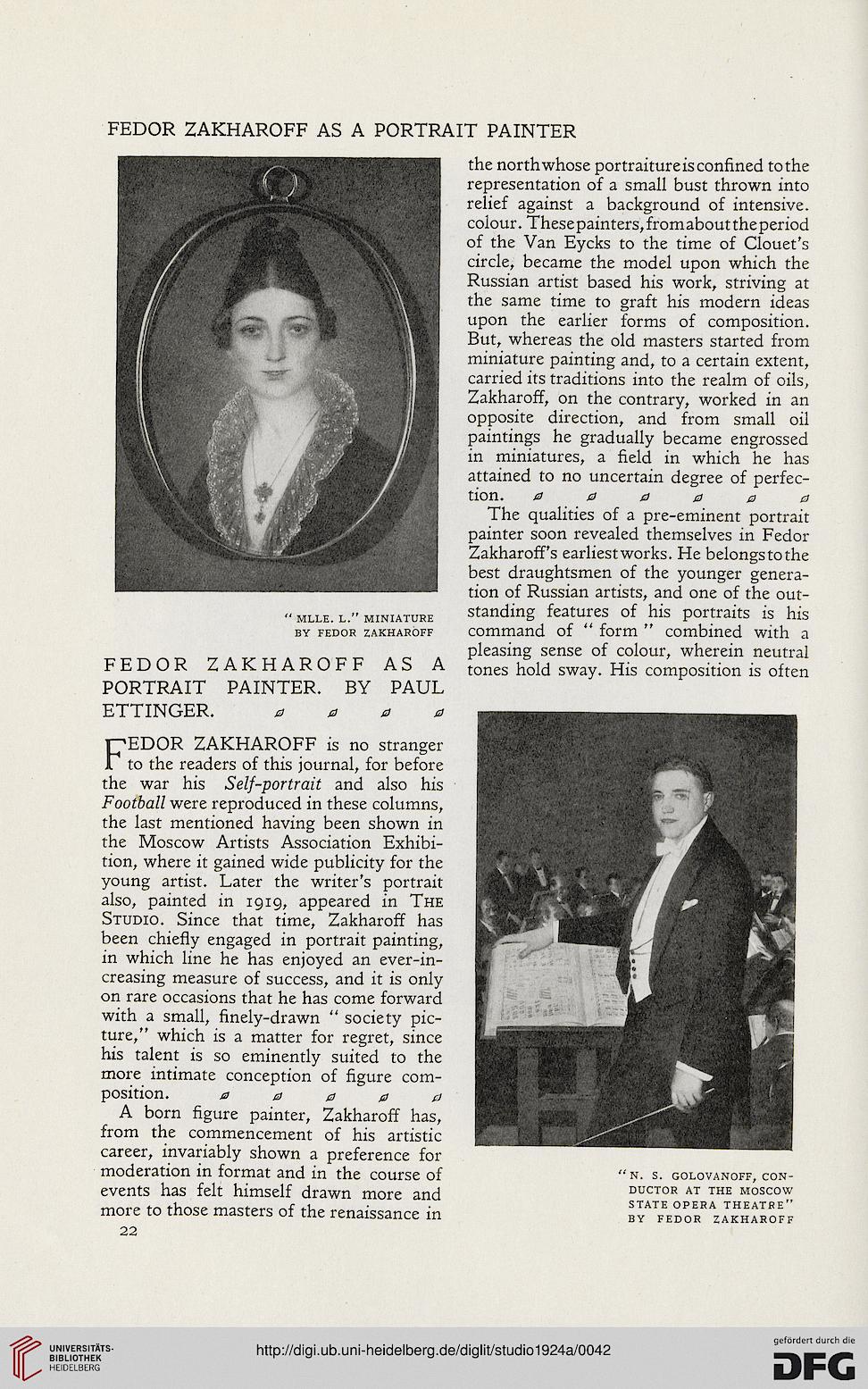 Information about OCR text
FEDOR ZAKHAROFF AS A PORTRAIT PAINTER

FEDOR ZAKHAROFF AS A
PORTRAIT PAINTER. BY PAUL
ETTINGER. 0000

FEDOR ZAKHAROFF is no stranger
to the readers of this journal, for before
the war his Self-portrait and also his
Football were reproduced in these columns,
the last mentioned having been shown in
the Moscow Artists Association Exhibi-
tion, where it gained wide publicity for the
young artist. Later the writer's portrait
also, painted in 1919, appeared in The
Studio. Since that time, Zakharoff has
been chiefly engaged in portrait painting,
in which line he has enjoyed an ever-in-
creasing measure of success, and it is only
on rare occasions that he has come forward
with a small, finely-drawn " society pic-
ture," which is a matter for regret, since
his talent is so eminently suited to the
more intimate conception of figure com-
position. 00000
A born figure painter, Zakharoff has,
from the commencement of his artistic
career, invariably shown a preference for
moderation in format and in the course of
events has felt himself drawn more and
more to those masters of the renaissance in
22

the northwhose portraiture is confined to the
representation of a small bust thrown into
relief against a background of intensive,
colour. These painters, fromabout the period
of the Van Eycks to the time of Clouet's
circle, became the model upon which the
Russian artist based his work, striving at
the same time to graft his modern ideas
upon the earlier forms of composition.
But, whereas the old masters started from
miniature painting and, to a certain extent,
carried its traditions into the realm of oils,
Zakharoff, on the contrary, worked in an
opposite direction, and from small oil
paintings he gradually became engrossed
in miniatures, a field in which he has
attained to no uncertain degree of perfec-
tion. 000000
The qualities of a pre-eminent portrait
painter soon revealed themselves in Fedor
Zakharoffs earliest works. He belongs to the
best draughtsmen of the younger genera-
tion of Russian artists, and one of the out-
standing features of his portraits is his
command of " form " combined with a
pleasing sense of colour, wherein neutral
tones hold sway. His composition is often