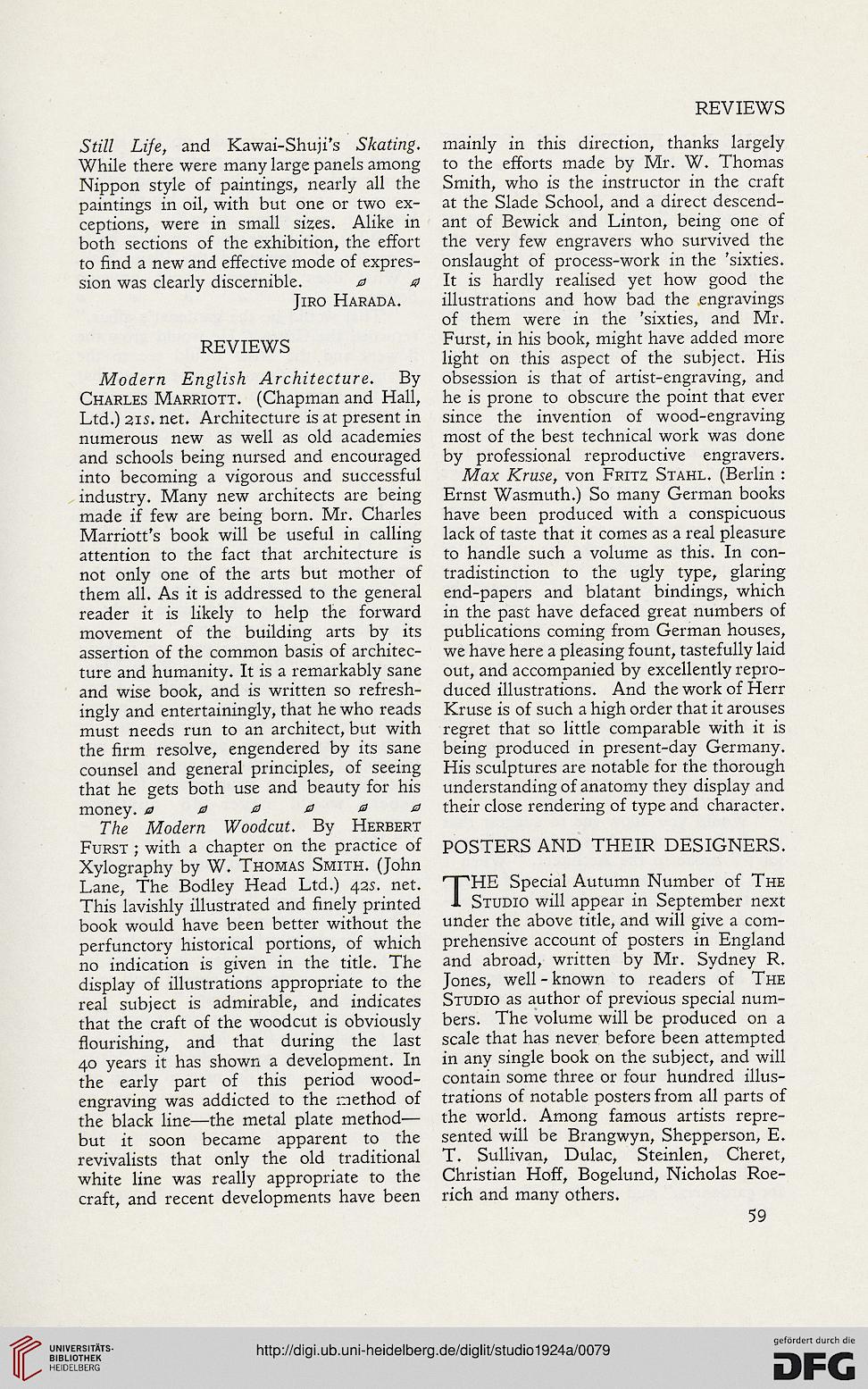 Still Life, and Kawai-Shuji's Skating.
While there were many large panels among
Nippon style of paintings, nearly all the
paintings in oil, with but one or two ex-
ceptions, were in small sizes. Alike in
both sections of the exhibition, the effort
to find a new and effective mode of expres-
sion was clearly discernible. 0 0

Modern English Architecture. By
Charles Marriott. (Chapman and Hall,
Ltd.) 21s. net. Architecture is at present in
numerous new as well as old academies
and schools being nursed and encouraged
into becoming a vigorous and successful
industry. Many new architects are being
made if few are being born. Mr. Charles
Marriott's book will be useful in calling
attention to the fact that architecture is
not only one of the arts but mother of
them all. As it is addressed to the general
reader it is likely to help the forward
movement of the building arts by its
assertion of the common basis of architec-
ture and humanity. It is a remarkably sane
and wise book, and is written so refresh-
ingly and entertainingly, that he who reads
must needs run to an architect, but with
the firm resolve, engendered by its sane
counsel and general principles, of seeing
that he gets both use and beauty for his
money. 000000

The Modern Woodcut. By Herbert
Furst ; with a chapter on the practice of
Xylography by W. Thomas Smith. (John
Lane, The Bodley Head Ltd.) 42s. net.
This lavishly illustrated and finely printed
book would have been better without the
perfunctory historical portions, of which
no indication is given in the title. The
display of illustrations appropriate to the
real subject is admirable, and indicates
that the craft of the woodcut is obviously
flourishing, and that during the last
40 years it has shown a development. In
the early part of this period wood-
engraving was addicted to the method of
the black line—the metal plate method—
but it soon became apparent to the
revivalists that only the old traditional
white line was really appropriate to the
craft, and recent developments have been

mainly in this direction, thanks largely
to the efforts made by Mr. W. Thomas
Smith, who is the instructor in the craft
at the Slade School, and a direct descend-
ant of Bewick and Linton, being one of
the very few engravers who survived the
onslaught of process-work in the 'sixties.
It is hardly realised yet how good the
illustrations and how bad the engravings
of them were in the 'sixties, and Mr.
Furst, in his book, might have added more
light on this aspect of the subject. His
obsession is that of artist-engraving, and
he is prone to obscure the point that ever
since the invention of wood-engraving
most of the best technical work was done
by professional reproductive engravers.

Max Kruse, von Fritz Stahl. (Berlin :
Ernst Wasmuth.) So many German books
have been produced with a conspicuous
lack of taste that it comes as a real pleasure
to handle such a volume as this. In con-
tradistinction to the ugly type, glaring
end-papers and blatant bindings, which
in the past have defaced great numbers of
publications coming from German houses,
we have here a pleasing fount, tastefully laid
out, and accompanied by excellently repro-
duced illustrations. And the work of Herr
Kruse is of such a high order that it arouses
regret that so little comparable with it is
being produced in present-day Germany.
His sculptures are notable for the thorough
understanding of anatomy they display and
their close rendering of type and character.

POSTERS AND THEIR DESIGNERS.

THE Special Autumn Number of The
Studio will appear in September next
under the above title, and will give a com-
prehensive account of posters in England
and abroad, written by Mr. Sydney R.
Jones, well - known to readers of The
Studio as author of previous special num-
bers. The volume will be produced on a
scale that has never before been attempted
in any single book on the subject, and will
contain some three or four hundred illus-
trations of notable posters from all parts of
the world. Among famous artists repre-
sented will be Brangwyn, Shepperson, E.
T. Sullivan, Dulac, Steinlen, Cheret,
Christian Hoff, Bogelund, Nicholas Roe-
rich and many others.