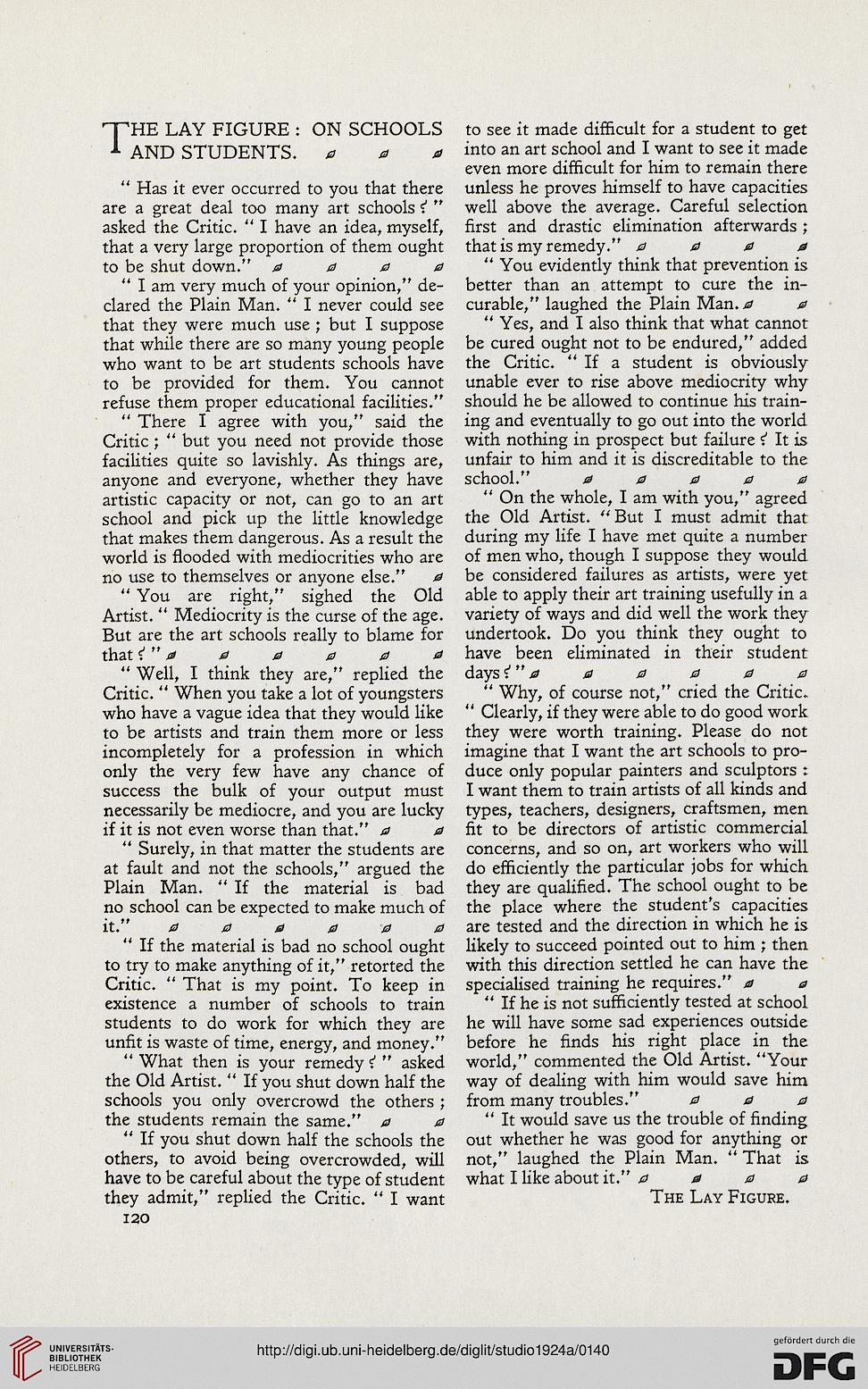 Information about OCR text
""THE LAY FIGURE : ON SCHOOLS
1 AND STUDENTS. 000

" Has it ever occurred to you that there
are a great deal too many art schools i "
asked the Critic. " I have an idea, myself,
that a very large proportion of them ought
to be shut down." 0000

" I am very much of your opinion," de-
clared the Plain Man. " I never could see
that they were much use ; but I suppose
that while there are so many young people
who want to be art students schools have
to be provided for them. You cannot
refuse them proper educational facilities."

" There I agree with you," said the
Critic ; " but you need not provide those
facilities quite so lavishly. As things are,
anyone and everyone, whether they have
artistic capacity or not, can go to an art
school and pick up the little knowledge
that makes them dangerous. As a result the
world is flooded with mediocrities who are
no use to themselves or anyone else." 0

" Well, I think they are," replied the
Critic. " When you take a lot of youngsters
who have a vague idea that they would like
to be artists and train them more or less
incompletely for a profession in which
only the very few have any chance of
success the bulk of your output must
necessarily be mediocre, and you are lucky
if it is not even worse than that." 0 0

" Surely, in that matter the students are
at fault and not the schools," argued the
Plain Man. " If the material is bad
no school can be expected to make much of
it." 000000

" If the material is bad no school ought
to try to make anything of it," retorted the
Critic. " That is my point. To keep in
existence a number of schools to train
students to do work for which they are
unfit is waste of time, energy, and money."

" What then is your remedy < " asked
the Old Artist. " If you shut down half the
schools you only overcrowd the others ;
the students remain the same." 0 0

" If you shut down half the schools the
others, to avoid being overcrowded, will
have to be careful about the type of student
they admit," replied the Critic. " I want

to see it made difficult for a student to get
into an art school and I want to see it made
even more difficult for him to remain there
unless he proves himself to have capacities
well above the average. Careful selection
first and drastic elimination afterwards ;
that is my remedy." 0000

" You evidently think that prevention is
better than an attempt to cure the in-
curable," laughed the Plain Man. 0 0

" Yes, and I also think that what cannot
be cured ought not to be endured," added
the Critic. " If a student is obviously
unable ever to rise above mediocrity why
should he be allowed to continue his train-
ing and eventually to go out into the world
with nothing in prospect but failure i It is
unfair to him and it is discreditable to the
school." 00000

" On the whole, I am with you," agreed
the Old Artist. "But I must admit that
during my life I have met quite a number
of men who, though I suppose they would
be considered failures as artists, were yet
able to apply their art training usefully in a
variety of ways and did well the work they
undertook. Do you think they ought to
have been eliminated in their student
days i"0 0 0 0 0 0

" Why, of course not," cried the Critic.
" Clearly, if they were able to do good work
they were worth training. Please do not
imagine that I want the art schools to pro-
duce only popular painters and sculptors :
I want them to train artists of all kinds and
types, teachers, designers, craftsmen, men
fit to be directors of artistic commercial
concerns, and so on, art workers who will
do efficiently the particular jobs for which
they are qualified. The school ought to be
the place where the student's capacities
are tested and the direction in which he is
likely to succeed pointed out to him ; then
with this direction settled he can have the
specialised training he requires." 0 a

" If he is not sufficiently tested at school
he will have some sad experiences outside
before he finds his right place in the
world," commented the Old Artist. "Your
way of dealing with him would save him
from many troubles." 000

" It would save us the trouble of finding
out whether he was good for anything or
not," laughed the Plain Man. " That is
what I like about it," 0 0 0 0
The Lay Figure.