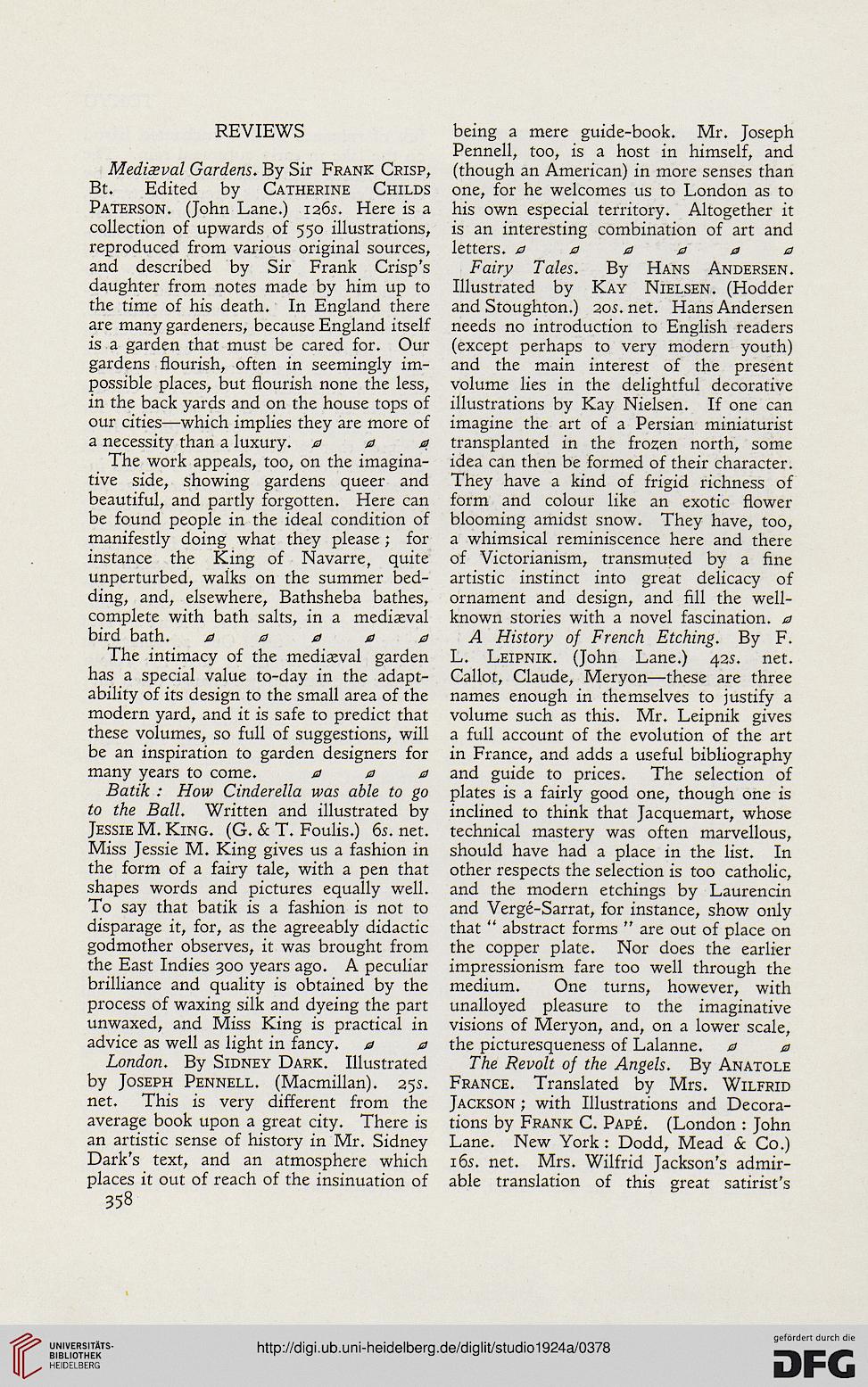 Mediaeval Gardens. By Sir Frank Crisp,
Bt. Edited by Catherine Childs
Paterson. (John Lane.) 126s. Here is a
collection of upwards of 550 illustrations,
reproduced from various original sources,
and described by Sir Frank Crisp's
daughter from notes made by him up to
the time of his death. In England there
are many gardeners, because England itself
is a garden that must be cared for. Our
gardens flourish, often in seemingly im-
possible places, but flourish none the less,
in the back yards and on the house tops of
our cities—which implies they are more of
a necessity than a luxury, 000

The work appeals, too, on the imagina-
tive side, showing gardens queer and
beautiful, and partly forgotten. Here can
be found people in the ideal condition of
manifestly doing what they please ; for
instance the King of Navarre, quite
unperturbed, walks on the summer bed-
ding, and, elsewhere, Bathsheba bathes,
complete with bath salts, in a mediaeval
bird bath. 0 a 0 0 a

The intimacy of the mediaeval garden
has a special value to-day in the adapt-
ability of its design to the small area of the
modern yard, and it is safe to predict that
these volumes, so full of suggestions, will
be an inspiration to garden designers for
many years to come. 000

Batik : How Cinderella was able to go
to the Ball. Written and illustrated by
Jessie M. King. (G. & T. Foulis.) 6s. net.
Miss Jessie M. King gives us a fashion in
the form of a fairy tale, with a pen that
shapes words and pictures equally well.
To say that batik is a fashion is not to
disparage it, for, as the agreeably didactic
godmother observes, it was brought from
the East Indies 300 years ago. A peculiar
brilliance and quality is obtained by the
process of waxing silk and dyeing the part
unwaxed, and Miss King is practical in
advice as well as light in fancy. 0 0

London. By Sidney Dark. Illustrated
by Joseph Pennell. (Macmillan). 255.
net. This is very different from the
average book upon a great city. There is
an artistic sense of history in Mr. Sidney
Dark's text, and an atmosphere which
places it out of reach of the insinuation of

being a mere guide-book. Mr. Joseph
Pennell, too, is a host in himself, and
(though an American) in more senses than
one, for he welcomes us to London as to
his own especial territory. Altogether it
is an interesting combination of art and
letters. 000000

Fairy Tales. By Hans Andersen.
Illustrated by Kay Nielsen. (Hodder
and Stoughton.) 205. net. Hans Andersen
needs no introduction to English readers
(except perhaps to very modern youth)
and the main interest of the present
volume lies in the delightful decorative
illustrations by Kay Nielsen. If one can
imagine the art of a Persian miniaturist
transplanted in the frozen north, some
idea can then be formed of their character.
They have a kind of frigid richness of
form and colour like an exotic flower
blooming amidst snow. They have, too,
a whimsical reminiscence here and there
of Victorianism, transmuted by a fine
artistic instinct into great delicacy of
ornament and design, and fill the well-
known stories with a novel fascination. 0

A History of French Etching. By F.
L. Leipnik. (John Lane.) 425. net.
Callot, Claude, Meryon—these are three
names enough in themselves to justify a
volume such as this. Mr. Leipnik gives
a full account of the evolution of the art
in France, and adds a useful bibliography
and guide to prices. The selection of
plates is a fairly good one, though one is
inclined to think that Jacquemart, whose
technical mastery was often marvellous,
should have had a place in the list. In
other respects the selection is too catholic,
and the modern etchings by Laurencin
and Verge-Sarrat, for instance, show only
that " abstract forms " are out of place on
the copper plate. Nor does the earlier
impressionism fare too well through the
medium. One turns, however, with
unalloyed pleasure to the imaginative
visions of Meryon, and, on a lower scale,
the picturesqueness of Lalanne. 0 0