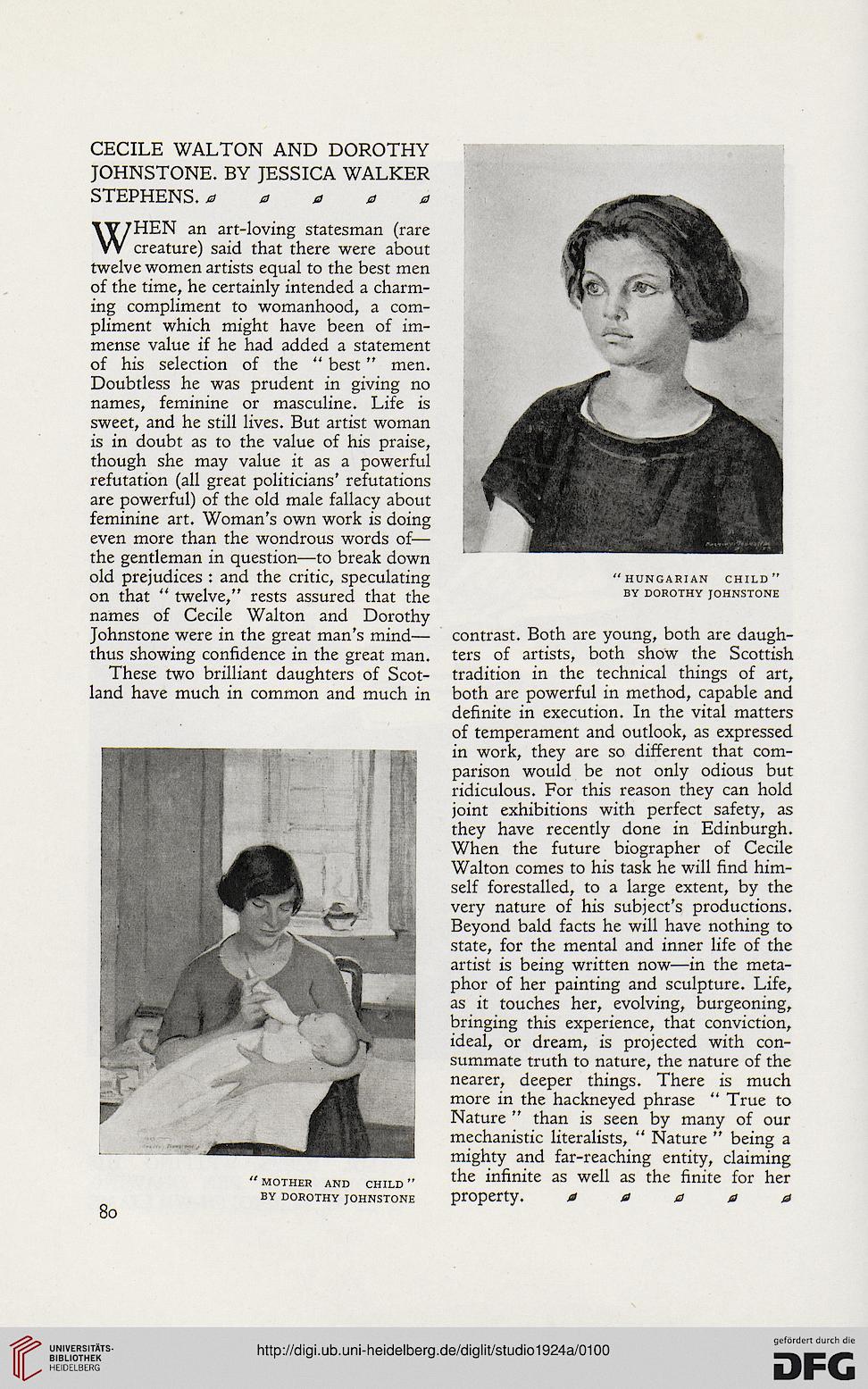 Information about OCR text
CECILE WALTON AND DOROTHY
JOHNSTONE. BY JESSICA WALKER
STEPHENS, a a a 0 a

WHEN an art-loving statesman (rare
creature) said that there were about
twelve women artists equal to the best men
of the time, he certainly intended a charm-
ing compliment to womanhood, a com-
pliment which might have been of im-
mense value if he had added a statement
of his selection of the " best" men.
Doubtless he was prudent in giving no
names, feminine or masculine. Life is
sweet, and he still lives. But artist woman
is in doubt as to the value of his praise,
though she may value it as a powerful
refutation (all great politicians' refutations
are powerful) of the old male fallacy about
feminine art. Woman's own work is doing
even more than the wondrous words of—
the gentleman in question—to break down
old prejudices : and the critic, speculating
on that " twelve," rests assured that the
names of Cecile Walton and Dorothy
Johnstone were in the great man's mind—
thus showing confidence in the great man.

" MOTHER AND CHILD "
BY DOROTHY JOHNSTONE

contrast. Both are young, both are daugh-
ters of artists, both show the Scottish
tradition in the technical things of art,
both are powerful in method, capable and
definite in execution. In the vital matters
of temperament and outlook, as expressed
in work, they are so different that com-
parison would be not only odious but
ridiculous. For this reason they can hold
joint exhibitions with perfect safety, as
they have recently done in Edinburgh.
When the future biographer of Cecile
Walton comes to his task he will find him-
self forestalled, to a large extent, by the
very nature of his subject's productions.
Beyond bald facts he will have nothing to
state, for the mental and inner life of the
artist is being written now—in the meta-
phor of her painting and sculpture. Life,
as it touches her, evolving, burgeoning,
bringing this experience, that conviction,
ideal, or dream, is projected with con-
summate truth to nature, the nature of the
nearer, deeper things. There is much
more in the hackneyed phrase " True to
Nature " than is seen by many of our
mechanistic literalists, " Nature " being a
mighty and far-reaching entity, claiming
the infinite as well as the finite for her
property. 0 a a a a