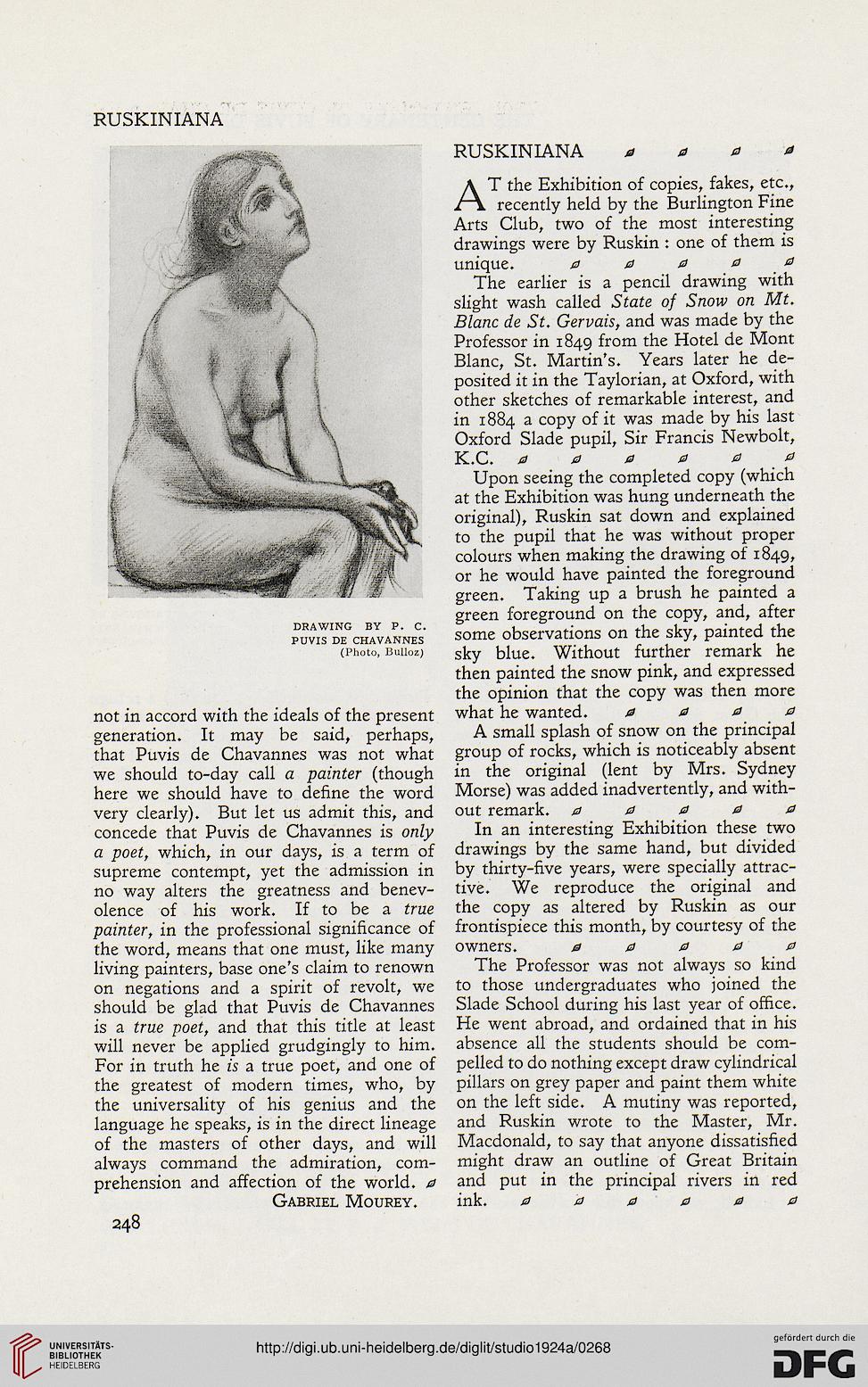 not in accord with the ideals of the present
generation. It may be said, perhaps,
that Puvis de Chavannes was not what
we should to-day call a painter (though
here we should have to define the word
very clearly). But let us admit this, and
concede that Puvis de Chavannes is only
a poet, which, in our days, is a term of
supreme contempt, yet the admission in
no way alters the greatness and benev-
olence of his work. If to be a true
painter, in the professional significance of
the word, means that one must, like many
living painters, base one's claim to renown
on negations and a spirit of revolt, we
should be glad that Puvis de Chavannes
is a true poet, and that this title at least
will never be applied grudgingly to him.
For in truth he is a true poet, and one of
the greatest of modern times, who, by
the universality of his genius and the
language he speaks, is in the direct lineage
of the masters of other days, and will
always command the admiration, com-
prehension and affection of the world, 0
Gabriel Mourey.

RUSKINIANA a a a a

AT the Exhibition of copies, fakes, etc.,
recently held by the Burlington Fine
Arts Club, two of the most interesting
drawings were by Ruskin : one of them is
unique. a a 0 0 a

The earlier is a pencil drawing with
slight wash called State of Snow on Mt.
Blanc de St. Gervais, and was made by the
Professor in 1849 from the Hotel de Mont
Blanc, St. Martin's. Years later he de-
posited it in the Taylorian, at Oxford, with
other sketches of remarkable interest, and
in 1884 a copy of it was made by his last
Oxford Slade pupil, Sir Francis Newbolt,
K.C. 000000
Upon seeing the completed copy (which
at the Exhibition was hung underneath the
original), Ruskin sat down and explained
to the pupil that he was without proper
colours when making the drawing of 1849,
or he would have painted the foreground
green. Taking up a brush he painted a
green foreground on the copy, and, after
some observations on the sky, painted the
sky blue. Without further remark he
then painted the snow pink, and expressed
the opinion that the copy was then more
what he wanted. 0000
A small splash of snow on the principal
group of rocks, which is noticeably absent
in the original (lent by Mrs. Sydney
Morse) was added inadvertently, and with-
out remark. 00000
In an interesting Exhibition these two
drawings by the same hand, but divided
by thirty-five years, were specially attrac-
tive. We reproduce the original and
the copy as altered by Ruskin as our
frontispiece this month, by courtesy of the
owners. 00000
The Professor was not always so kind
to those undergraduates who joined the
Slade School during his last year of office.
He went abroad, and ordained that in his
absence all the students should be com-
pelled to do nothing except draw cylindrical
pillars on grey paper and paint them white
on the left side. A mutiny was reported,
and Ruskin wrote to the Master, Mr.
Macdonald, to say that anyone dissatisfied
might draw an outline of Great Britain
and put in the principal rivers in red
ink. 000000