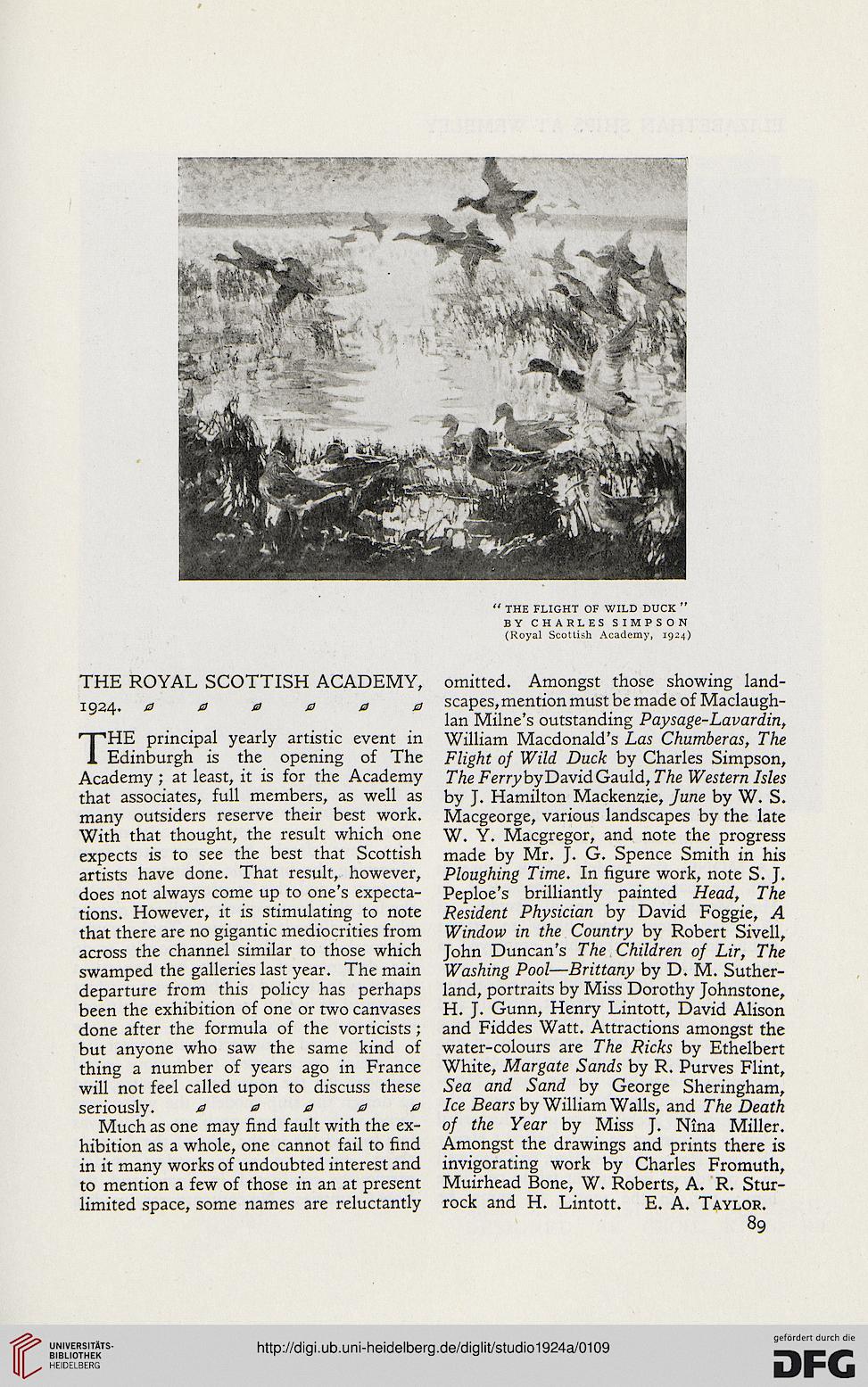 THE principal yearly artistic event in
Edinburgh is the opening of The
Academy; at least, it is for the Academy
that associates, full members, as well as
many outsiders reserve their best work.
With that thought, the result which one
expects is to see the best that Scottish
artists have done. That result, however,
does not always come up to one's expecta-
tions. However, it is stimulating to note
that there are no gigantic mediocrities from
across the channel similar to those which
swamped the galleries last year. The main
departure from this policy has perhaps
been the exhibition of one or two canvases
done after the formula of the vorticists ;
but anyone who saw the same kind of
thing a number of years ago in France
will not feel called upon to discuss these
seriously. a a a 0 0
Much as one may find fault with the ex-
hibition as a whole, one cannot fail to find
in it many works of undoubted interest and
to mention a few of those in an at present
limited space, some names are reluctantly

omitted. Amongst those showing land-
scapes, mention must be made of Maclaugh-
lan Milne's outstanding Paysage-Lavardin,
William Macdonald's Las Chumberas, The
Flight of Wild Duck by Charles Simpson,
The Ferry by David Gauld, The Western Isles
by J. Hamilton Mackenzie, June by W. S.
Macgeorge, various landscapes by the late
W. Y. Macgregor, and note the progress
made by Mr. J. G. Spence Smith in his
Ploughing Time. In figure work, note S. J.
Peploe's brilliantly painted Head, The
Resident Physician by David Foggie, A
Window in the Country by Robert Sivell,
John Duncan's The Children of Lir, The
Washing Pool—Brittany by D. M. Suther-
land, portraits by Miss Dorothy Johnstone,
H. J. Gunn, Henry Lintott, David Alison
and Fiddes Watt. Attractions amongst the
water-colours are The Ricks by Ethelbert
White, Margate Sands by R. Purves Flint,
Sea and Sand by George Sheringham,
Ice Bears by William Walls, and The Death
of the Year by Miss J. Nina Miller.
Amongst the drawings and prints there is
invigorating work by Charles Fromuth,
Muirhead Bone, W. Roberts, A. R. Stur-
rock and H. Lintott. E. A. Taylor.