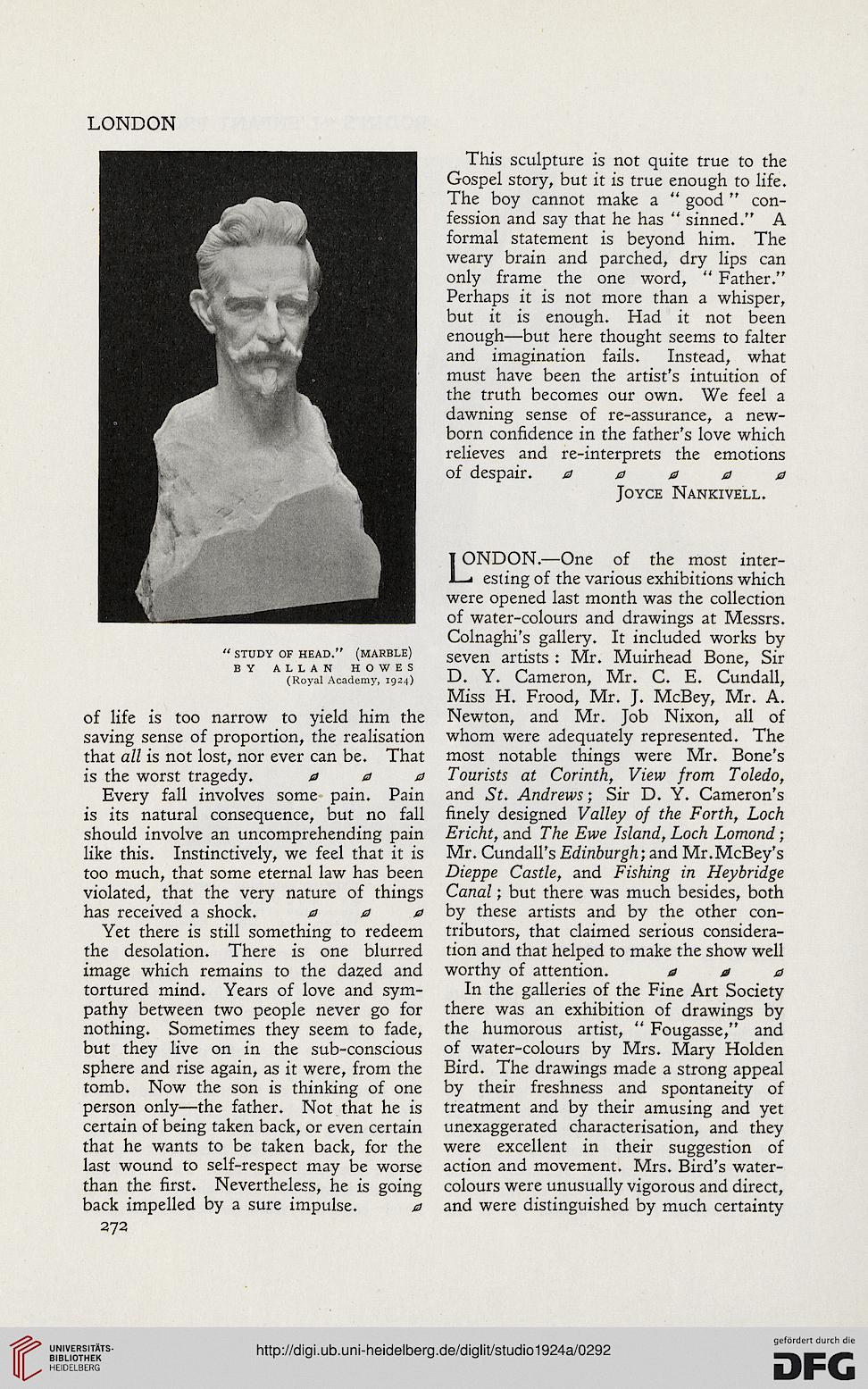 of life is too narrow to yield him the
saving sense of proportion, the realisation
that all is not lost, nor ever can be. That
is the worst tragedy. a a a

Every fall involves some pain. Pain
is its natural consequence, but no fall
should involve an uncomprehending pain
like this. Instinctively, we feel that it is
too much, that some eternal law has been
violated, that the very nature of things
has received a shock. a a a

Yet there is still something to redeem
the desolation. There is one blurred
image which remains to the dazed and
tortured mind. Years of love and sym-
pathy between two people never go for
nothing. Sometimes they seem to fade,
but they live on in the sub-conscious
sphere and rise again, as it were, from the
tomb. Now the son is thinking of one
person only—the father. Not that he is
certain of being taken back, or even certain
that he wants to be taken back, for the
last wound to self-respect may be worse
than the first. Nevertheless, he is going
back impelled by a sure impulse. a

This sculpture is not quite true to the
Gospel story, but it is true enough to life.
The boy cannot make a " good " con-
fession and say that he has " sinned." A
formal statement is beyond him. The
weary brain and parched, dry lips can
only frame the one word, " Father."
Perhaps it is not more than a whisper,
but it is enough. Had it not been
enough—but here thought seems to falter
and imagination fails. Instead, what
must have been the artist's intuition of
the truth becomes our own. We feel a
dawning sense of re-assurance, a new-
born confidence in the father's love which
relieves and re-interprets the emotions
of despair. a a a a a
Joyce Nankivell.

LONDON.—One of the most inter-
-i esting of the various exhibitions which
were opened last month was the collection
of water-colours and drawings at Messrs.
Colnaghi's gallery. It included works by
seven artists : Mr. Muirhead Bone, Sir
D. Y. Cameron, Mr. C. E. Cundall,
Miss H. Frood, Mr. J. McBey, Mr. A.
Newton, and Mr. Job Nixon, all of
whom were adequately represented. The
most notable things were Mr. Bone's
Tourists at Corinth, View from Toledo,
and St. Andrews; Sir D. Y. Cameron's
finely designed Valley of the Forth, Loch
Ericht, and The Ewe Island, Loch Lomond;
Mr. Cundall's Edinburgh; and Mr.McBey's
Dieppe Castle, and Fishing in Heybridge
Canal; but there was much besides, both
by these artists and by the other con-
tributors, that claimed serious considera-
tion and that helped to make the show well
worthy of attention. a 0 a

In the galleries of the Fine Art Society
there was an exhibition of drawings by
the humorous artist, " Fougasse," and
of water-colours by Mrs. Mary Holden
Bird. The drawings made a strong appeal
by their freshness and spontaneity of
treatment and by their amusing and yet
unexaggerated characterisation, and they
were excellent in their suggestion of
action and movement. Mrs. Bird's water-
colours were unusually vigorous and direct,
and were distinguished by much certainty