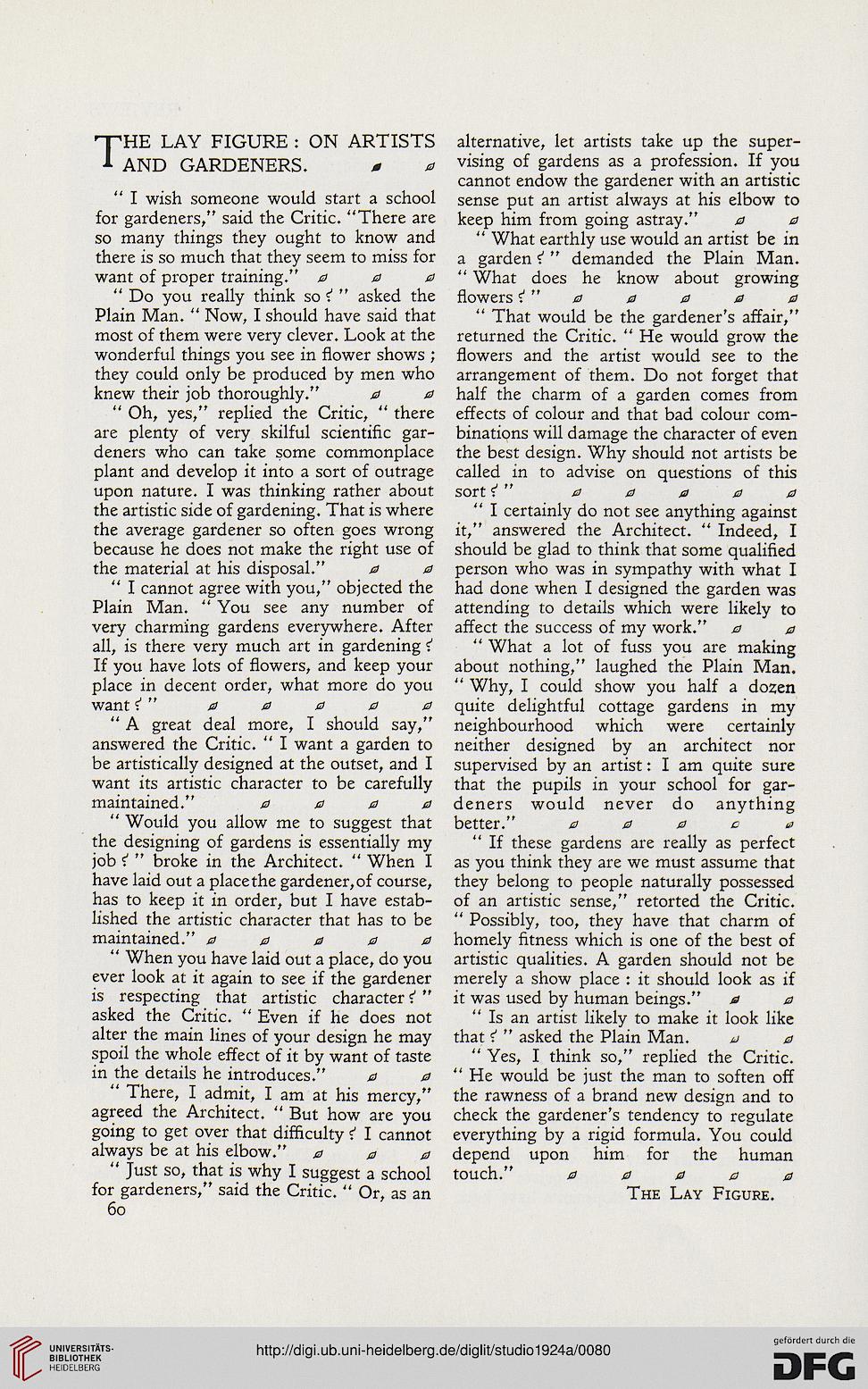 Information about OCR text
THE LAY FIGURE : ON ARTISTS
AND GARDENERS. 0 0

" I wish someone would start a school
for gardeners," said the Critic. "There are
so many things they ought to know and
there is so much that they seem to miss for
want of proper training." 000

" Do you really think so i " asked the
Plain Man. " Now, I should have said that
most of them were very clever. Look at the
wonderful things you see in flower shows ;
they could only be produced by men who
knew their job thoroughly." 0 0

" Oh, yes," replied the Critic, " there
are plenty of very skilful scientific gar-
deners who can take some commonplace
plant and develop it into a sort of outrage
upon nature. I was thinking rather about
the artistic side of gardening. That is where
the average gardener so often goes wrong
because he does not make the right use of
the material at his disposal." 0 a

" I cannot agree with you," objected the
Plain Man. " You see any number of
very charming gardens everywhere. After
all, is there very much art in gardening i
If you have lots of flowers, and keep your
place in decent order, what more do you
want i" 0 0 0 0 0

" A great deal more, I should say,"
answered the Critic. " I want a garden to
be artistically designed at the outset, and I
want its artistic character to be carefully
maintained." 0000

" Would you allow me to suggest that
the designing of gardens is essentially my
job t " broke in the Architect. " When I
have laid out a place the gardener, of course,
has to keep it in order, but I have estab-
lished the artistic character that has to be
maintained." 00000

" When you have laid out a place, do you
ever look at it again to see if the gardener
is respecting that artistic character i "
asked the Critic. " Even if he does not
alter the main lines of your design he may
spoil the whole effect of it by want of taste
in the details he introduces." 0 0

" There, I admit, I am at his mercy,"
agreed the Architect. " But how are you
going to get over that difficulty < I cannot
always be at his elbow." 000

" Just so, that is why I suggest a school
for gardeners," said the Critic. " Or, as an

alternative, let artists take up the super-
vising of gardens as a profession. If you
cannot endow the gardener with an artistic
sense put an artist always at his elbow to
keep him from going astray." 0 0

" That would be the gardener's affair,"
returned the Critic. " He would grow the
flowers and the artist would see to the
arrangement of them. Do not forget that
half the charm of a garden comes from
effects of colour and that bad colour com-
binations will damage the character of even
the best design. Why should not artists be
called in to advise on questions of this
sort i" 0 0 0 0 0

" I certainly do not see anything against
it," answered the Architect. " Indeed, I
should be glad to think that some qualified
person who was in sympathy with what I
had done when I designed the garden was
attending to details which were likely to
affect the success of my work." 0 0

" What a lot of fuss you are making
about nothing," laughed the Plain Man.
" Why, I could show you half a dozen
quite delightful cottage gardens in my
neighbourhood which were certainly
neither designed by an architect nor
supervised by an artist: I am quite sure
that the pupils in your school for gar-
deners would never do anything
better." 00000

" If these gardens are really as perfect
as you think they are we must assume that
they belong to people naturally possessed
of an artistic sense," retorted the Critic.
" Possibly, too, they have that charm of
homely fitness which is one of the best of
artistic qualities. A garden should not be
merely a show place : it should look as if
it was used by human beings." 0 0

" Yes, I think so," replied the Critic.
" He would be just the man to soften off
the rawness of a brand new design and to
check the gardener's tendency to regulate
everything by a rigid formula. You could
depend upon him for the human
touch." 00000
The Lay Figure.