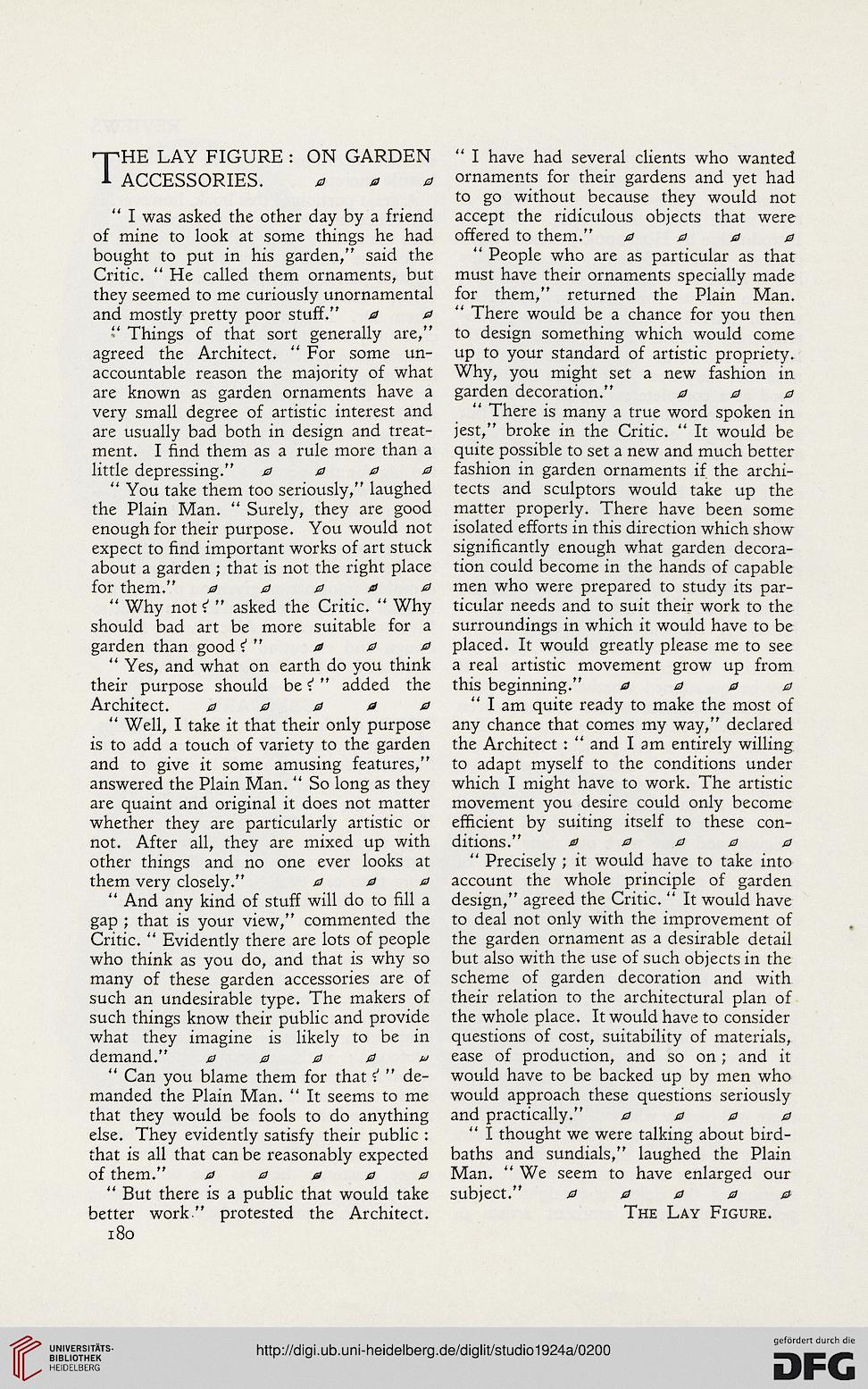 Information about OCR text
THE LAY FIGURE : ON GARDEN
ACCESSORIES. 0 a 0

" I was asked the other day by a friend
of mine to look at some things he had
bought to put in his garden," said the
Critic. " He called them ornaments, but
they seemed to me curiously unornamental
and mostly pretty poor stuff." 0 0

'-' Things of that sort generally are,"
agreed the Architect. " For some un-
accountable reason the majority of what
are known as garden ornaments have a
very small degree of artistic interest and
are usually bad both in design and treat-
ment. I find them as a rule more than a
little depressing." 0000

" You take them too seriously," laughed
the Plain Man. " Surely, they are good
enough for their purpose. You would not
expect to find important works of art stuck
about a garden ; that is not the right place
for them." 00000

" Yes, and what on earth do you think
their purpose should be i " added the
Architect. 00000

" Well, I take it that their only purpose
is to add a touch of variety to the garden
and to give it some amusing features,"
answered the Plain Man. " So long as they
are quaint and original it does not matter
whether they are particularly artistic or
not. After all, they are mixed up with
other things and no one ever looks at
them very closely." 000

" And any kind of stuff will do to fill a
gap ; that is your view," commented the
Critic. " Evidently there are lots of people
who think as you do, and that is why so
many of these garden accessories are of
such an undesirable type. The makers of
such things know their public and provide
what they imagine is likely to be in
demand." 00000

" Can you blame them for that i " de-
manded the Plain Man. " It seems to me
that they would be fools to do anything
else. They evidently satisfy their public :
that is all that can be reasonably expected
of them." 00000

" But there is a public that would take
better work " protested the Architect.

" I have had several clients who wanted
ornaments for their gardens and yet had
to go without because they would not
accept the ridiculous objects that were
offered to them." 0000

" People who are as particular as that
must have their ornaments specially made
for them," returned the Plain Man.
" There would be a chance for you then
to design something which would come
up to your standard of artistic propriety.
Why, you might set a new fashion in
garden decoration." 000

" There is many a true word spoken in
jest," broke in the Critic. " It would be
quite possible to set a new and much better
fashion in garden ornaments if the archi-
tects and sculptors would take up the
matter properly. There have been some
isolated efforts in this direction which show
significantly enough what garden decora-
tion could become in the hands of capable
men who were prepared to study its par-
ticular needs and to suit their work to the
surroundings in which it would have to be
placed. It would greatly please me to see
a real artistic movement grow up from
this beginning." 0000

" I am quite ready to make the most of
any chance that comes my way," declared
the Architect: " and I am entirely willing
to adapt myself to the conditions under
which I might have to work. The artistic
movement you desire could only become
efficient by suiting itself to these con-
ditions." 00000

" Precisely ; it would have to take into
account the whole principle of garden
design," agreed the Critic. " It would have
to deal not only with the improvement of
the garden ornament as a desirable detail
but also with the use of such objects in the
scheme of garden decoration and with
their relation to the architectural plan of
the whole place. It would have to consider
questions of cost, suitability of materials,
ease of production, and so on ; and it
would have to be backed up by men who
would approach these questions seriously
and practically." 0000

" I thought we were talking about bird-
baths and sundials," laughed the Plain
Man. " We seem to have enlarged our
subject." 00000
The Lay Figure.