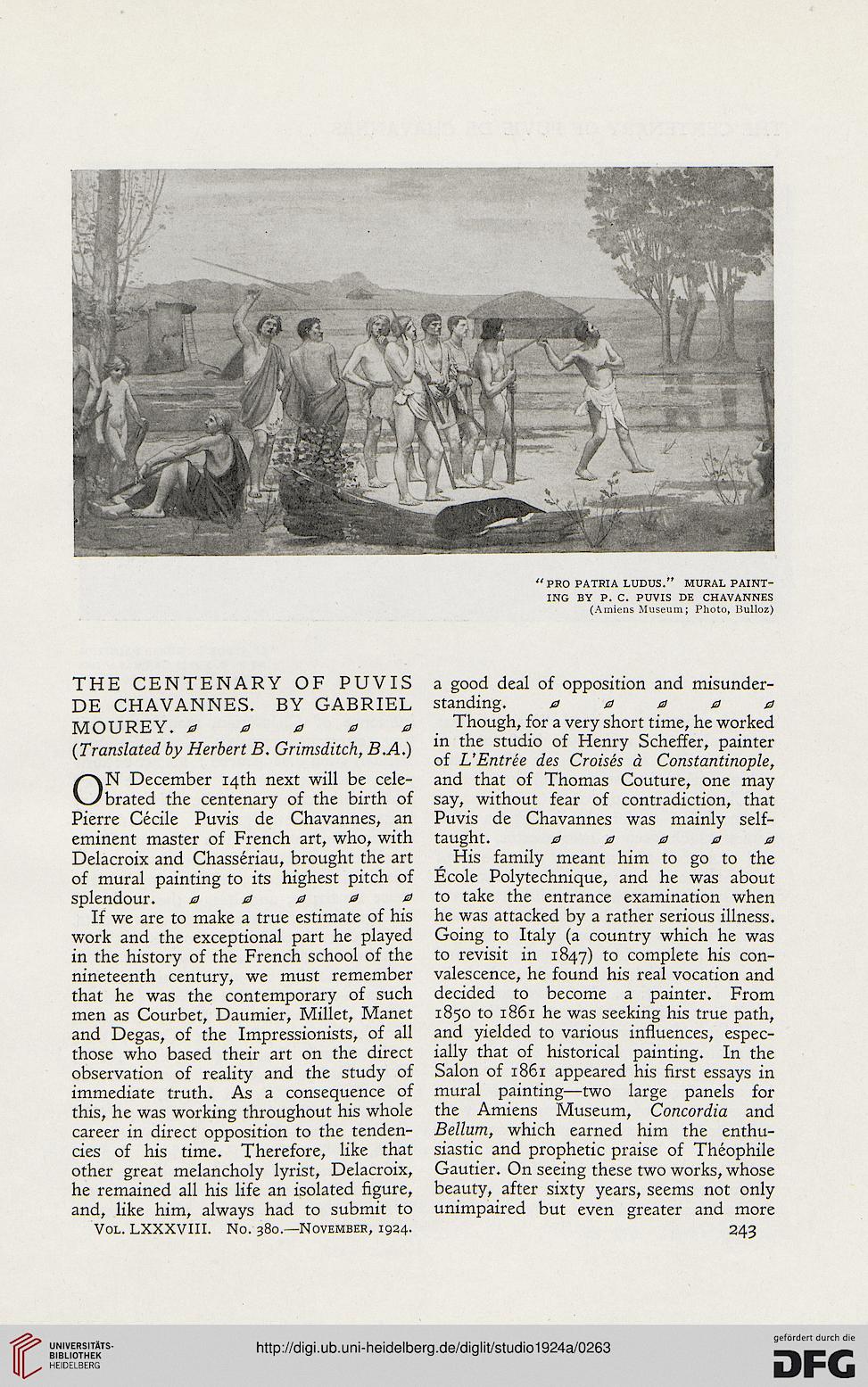 THE CENTENARY OF PUVIS
DE CHAVANNES. BY GABRIEL
MOUREY. a a 0 a a
(Translated by Herbert B. Grimsditch, B.A.)

ON December 14th next will be cele-
brated the centenary of the birth of
Pierre Cecile Puvis de Chavannes, an
eminent master of French art, who, with
Delacroix and Chasseriau, brought the art
of mural painting to its highest pitch of
splendour. 00000
If we are to make a true estimate of his
work and the exceptional part he played
in the history of the French school of the
nineteenth century, we must remember
that he was the contemporary of such
men as Courbet, Daumier, Millet, Manet
and Degas, of the Impressionists, of all
those who based their art on the direct
observation of reality and the study of
immediate truth. As a consequence of
this, he was working throughout his whole
career in direct opposition to the tenden-
cies of his time. Therefore, like that
other great melancholy lyrist, Delacroix,
he remained all his life an isolated figure,
and, like him, always had to submit to
Vol. LXXXVIII. No. 380.—November, 1924.

a good deal of opposition and misunder-
standing. 00000

Though, for a very short time, he worked
in the studio of Henry Scheffer, painter
of L'Entree des Croises a Constantinople,
and that of Thomas Couture, one may
say, without fear of contradiction, that
Puvis de Chavannes was mainly self-
taught. 00000

His family meant him to go to the
Ecole Polytechnique, and he was about
to take the entrance examination when
he was attacked by a rather serious illness.
Going to Italy (a country which he was
to revisit in 1847) to complete his con-
valescence, he found his real vocation and
decided to become a painter. From
1850 to 1861 he was seeking his true path,
and yielded to various influences, espec-
ially that of historical painting. In the
Salon of 1861 appeared his first essays in
mural painting—two large panels for
the Amiens Museum, Concordia and
Bellum, which earned him the enthu-
siastic and prophetic praise of Theophile
Gautier. On seeing these two works, whose
beauty, after sixty years, seems not only
unimpaired but even greater and more