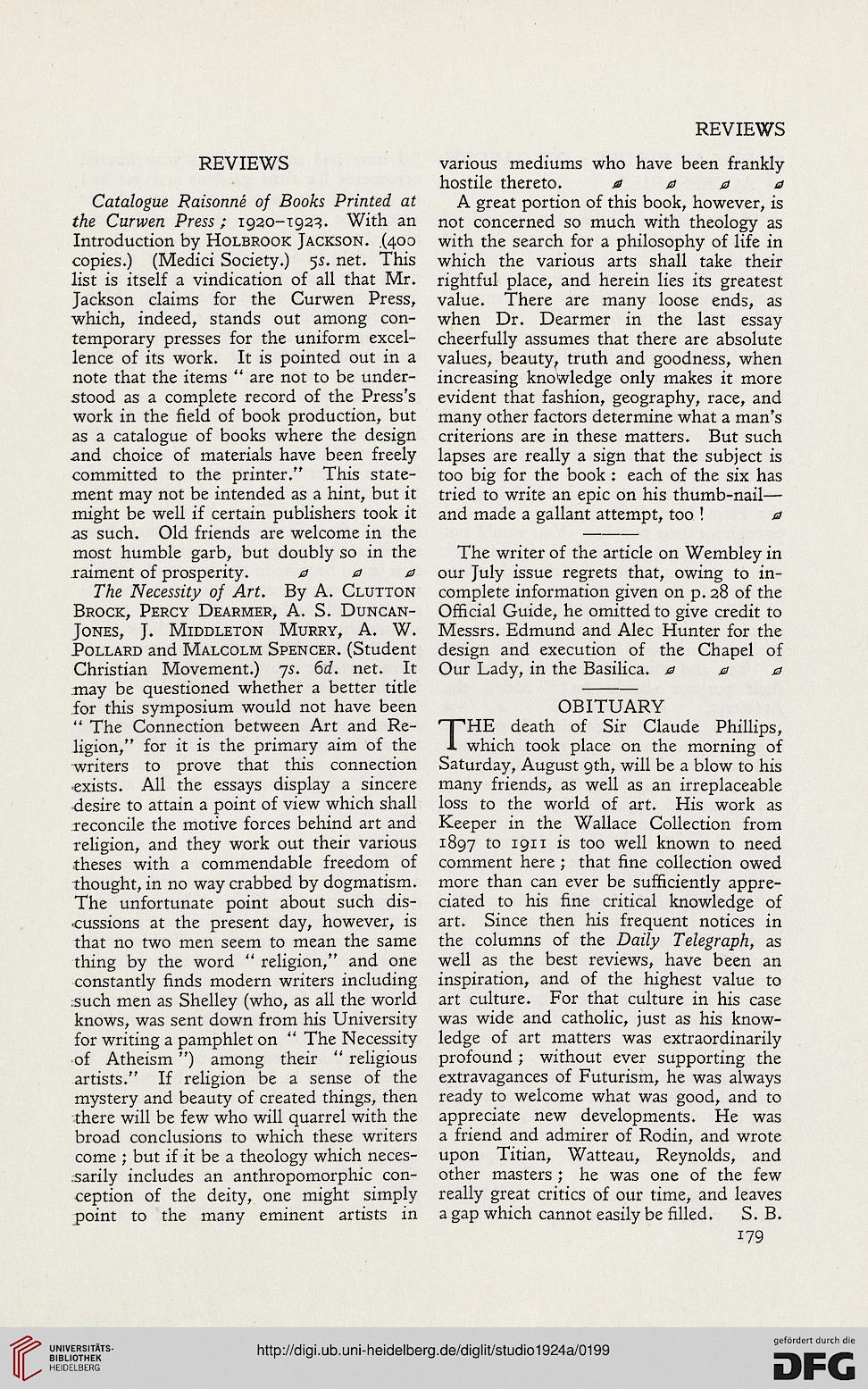 Catalogue Raisonne of Books Printed at
the Curwen Press ; 1920-T923. With an
Introduction by Holbrook Jackson. .(400
copies.) (Medici Society.) 55. net. This
list is itself a vindication of all that Mr.
Jackson claims for the Curwen Press,
which, indeed, stands out among con-
temporary presses for the uniform excel-
lence of its work. It is pointed out in a
note that the items " are not to be under-
stood as a complete record of the Press's
work in the field of book production, but
as a catalogue of books where the design
and choice of materials have been freely
committed to the printer." This state-
ment may not be intended as a hint, but it
might be well if certain publishers took it
as such. Old friends are welcome in the
most humble garb, but doubly so in the
raiment of prosperity. 0 0 0

The Necessity of Art. By A. Clutton
Brock, Percy Dearmer, A. S. Duncan-
Jones, J. MlDDLETON murry, A. W.

Pollard and Malcolm Spencer. (Student
Christian Movement.) 75. 6d. net. It
may be questioned whether a better title
for this symposium would not have been
" The Connection between Art and Re-
ligion," for it is the primary aim of the
writers to prove that this connection
•exists. All the essays display a sincere
desire to attain a point of view which shall
reconcile the motive forces behind art and
religion, and they work out their various
theses with a commendable freedom of
thought, in no way crabbed by dogmatism.
The unfortunate point about such dis-
cussions at the present day, however, is
that no two men seem to mean the same
thing by the word " religion," and one
constantly finds modern writers including
such men as Shelley (who, as all the world
knows, was sent down from his University
for writing a pamphlet on " The Necessity
of Atheism") among their " religious
artists." If religion be a sense of the
mystery and beauty of created things, then
there will be few who will quarrel with the
broad conclusions to which these writers
come ; but if it be a theology which neces-
.sarily includes an anthropomorphic con-
ception of the deity, one might simply
point to the many eminent artists in

various mediums who have been frankly
hostile thereto. a 0 0 a
A great portion of this book, however, is
not concerned so much with theology as
with the search for a philosophy of life in
which the various arts shall take their
rightful place, and herein lies its greatest
value. There are many loose ends, as
when Dr. Dearmer in the last essay
cheerfully assumes that there are absolute
values, beauty, truth and goodness, when
increasing knowledge only makes it more
evident that fashion, geography, race, and
many other factors determine what a man's
criterions are in these matters. But such
lapses are really a sign that the subject is
too big for the book : each of the six has
tried to write an epic on his thumb-nail—
and made a gallant attempt, too ! 0

The writer of the article on Wembley in
our July issue regrets that, owing to in-
complete information given on p. 28 of the
Official Guide, he omitted to give credit to
Messrs. Edmund and Alec Hunter for the
design and execution of the Chapel of
Our Lady, in the Basilica. 000

THE death of Sir Claude Phillips,
which took place on the morning of
Saturday, August 9th, will be a blow to his
many friends, as well as an irreplaceable
loss to the world of art. His work as
Keeper in the Wallace Collection from
1897 to 1911 is too well known to need
comment here ; that fine collection owed
more than can ever be sufficiently appre-
ciated to his fine critical knowledge of
art. Since then his frequent notices in
the columns of the Daily Telegraph, as
well as the best reviews, have been an
inspiration, and of the highest value to
art culture. For that culture in his case
was wide and catholic, just as his know-
ledge of art matters was extraordinarily
profound ; without ever supporting the
extravagances of Futurism, he was always
ready to welcome what was good, and to
appreciate new developments. He was
a friend and admirer of Rodin, and wrote
upon Titian, Watteau, Reynolds, and
other masters ; he was one of the few
really great critics of our time, and leaves
a gap which cannot easily be filled. S. B.