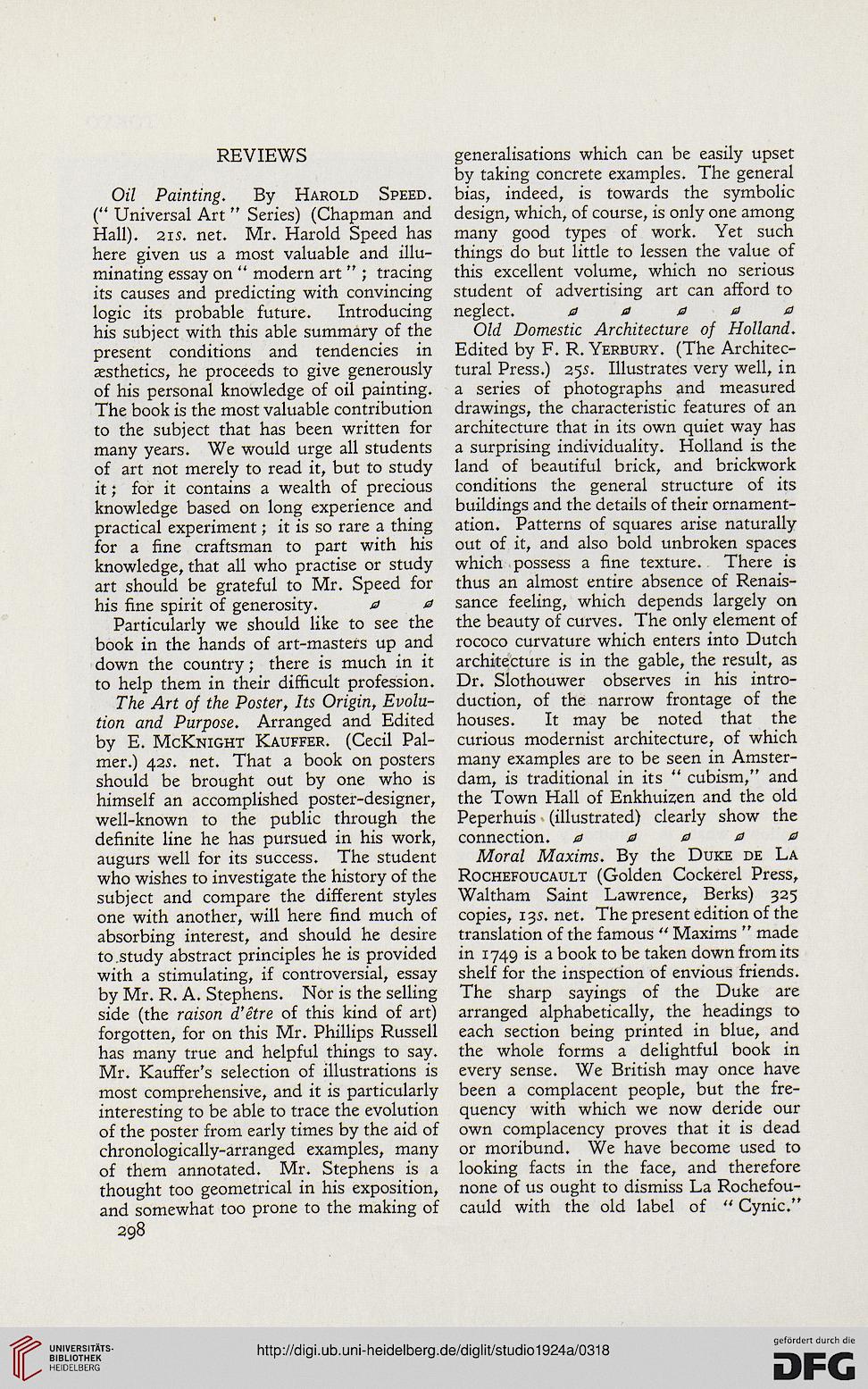 Oil Painting. By Harold Speed.
(" Universal Art " Series) (Chapman and
Hall). 2is. net. Mr. Harold Speed has
here given us a most valuable and illu-
minating essay on " modern art " ; tracing
its causes and predicting with convincing
logic its probable future. Introducing
his subject with this able summary of the
present conditions and tendencies in
aesthetics, he proceeds to give generously
of his personal knowledge of oil painting.
The book is the most valuable contribution
to the subject that has been written for
many years. We would urge all students
of art not merely to read it, but to study
it; for it contains a wealth of precious
knowledge based on long experience and
practical experiment; it is so rare a thing
for a fine craftsman to part with his
knowledge, that all who practise or study
art should be grateful to Mr. Speed for
his fine spirit of generosity. 0 e>

Particularly we should like to see the
book in the hands of art-masters up and
down the country; there is much in it
to help them in their difficult profession.

The Art of the Poster, Its Origin, Evolu-
tion and Purpose. Arranged and Edited
by E. McKnight Kauffer. (Cecil Pal-
mer.) 42s. net. That a book on posters
should be brought out by one who is
himself an accomplished poster-designer,
well-known to the public through the
definite line he has pursued in his work,
augurs well for its success. The student
who wishes to investigate the history of the
subject and compare the different styles
one with another, will here find much of
absorbing interest, and should he desire
to study abstract principles he is provided
with a stimulating, if controversial, essay
by Mr. R. A. Stephens. Nor is the selling
side (the raison d'etre of this kind of art)
forgotten, for on this Mr. Phillips Russell
has many true and helpful things to say.
Mr. Kauffer's selection of illustrations is
most comprehensive, and it is particularly
interesting to be able to trace the evolution
of the poster from early times by the aid of
chronologically-arranged examples, many
of them annotated. Mr. Stephens is a
thought too geometrical in his exposition,
and somewhat too prone to the making of

generalisations which can be easily upset
by taking concrete examples. The general
bias, indeed, is towards the symbolic
design, which, of course, is only one among
many good types of work. Yet such
things do but little to lessen the value of
this excellent volume, which no serious
student of advertising art can afford to
neglect. a a a a a

Old Domestic Architecture of Holland.
Edited by F. R. Yerbury. (The Architec-
tural Press.) 25s. Illustrates very well, in
a series of photographs and measured
drawings, the characteristic features of an
architecture that in its own quiet way has
a surprising individuality. Holland is the
land of beautiful brick, and brickwork
conditions the general structure of its
buildings and the details of their ornament-
ation. Patterns of squares arise naturally
out of it, and also bold unbroken spaces
which possess a fine texture. There is
thus an almost entire absence of Renais-
sance feeling, which depends largely on
the beauty of curves. The only element of
rococo curvature which enters into Dutch
architecture is in the gable, the result, as
Dr. Slothouwer observes in his intro-
duction, of the narrow frontage of the
houses. It may be noted that the
curious modernist architecture, of which
many examples are to be seen in Amster-
dam, is traditional in its " cubism," and
the Town Hall of Enkhuizen and the old
Peperhuis (illustrated) clearly show the
connection. 00000

Moral Maxims. By the Duke de La
Rochefoucault (Golden Cockerel Press,
Waltham Saint Lawrence, Berks) 325
copies, 13s.net. The present edition of the
translation of the famous " Maxims " made
in 1749 is a book to be taken down from its
shelf for the inspection of envious friends.
The sharp sayings of the Duke are
arranged alphabetically, the headings to
each section being printed in blue, and
the whole forms a delightful book in
every sense. We British may once have
been a complacent people, but the fre-
quency with which we now deride our
own complacency proves that it is dead
or moribund. We have become used to
looking facts in the face, and therefore
none of us ought to dismiss La Rochefou-
cauld with the old label of " Cynic."