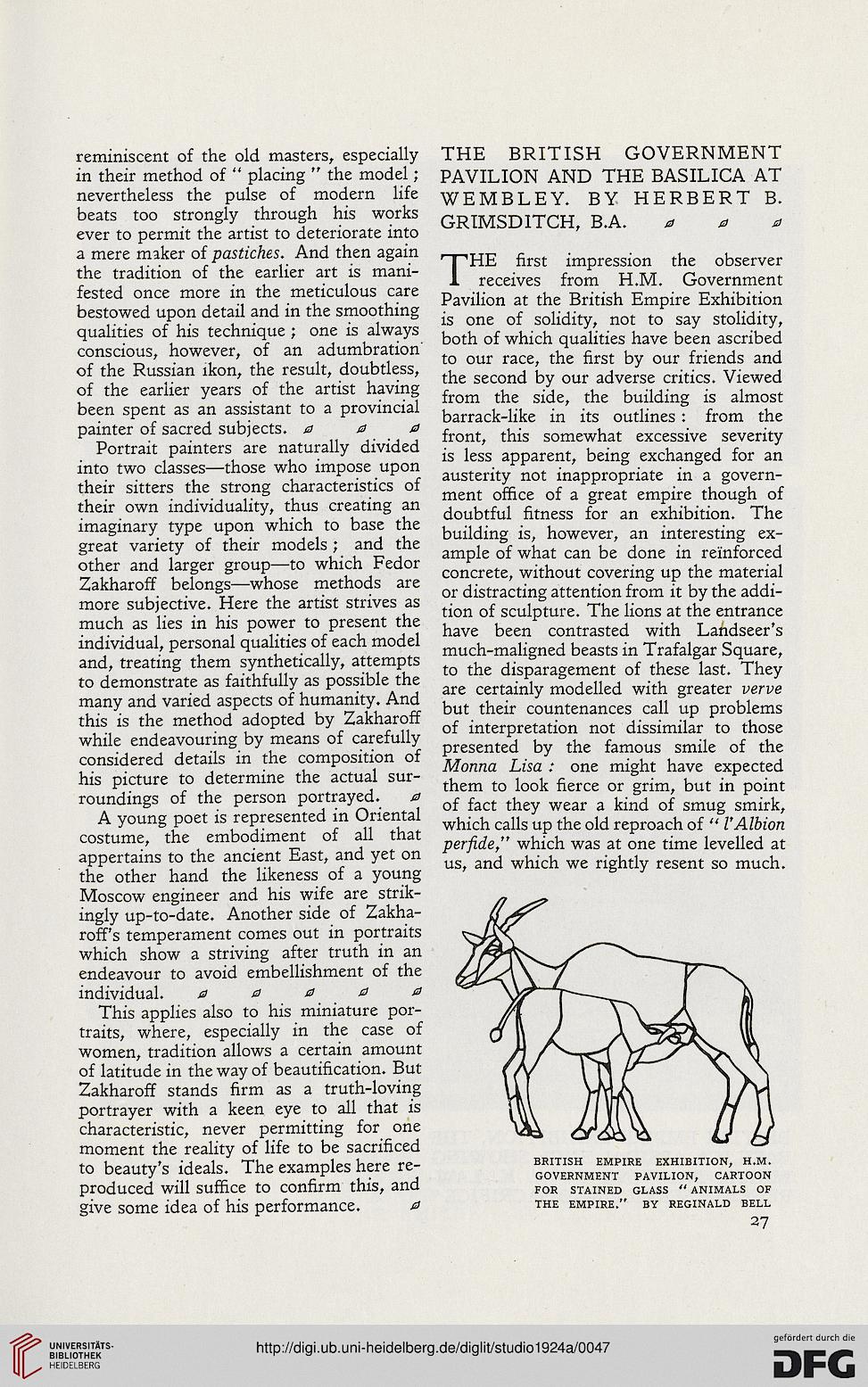 Information about OCR text
reminiscent of the old masters, especially
in their method of " placing " the model;
nevertheless the pulse of modern life
beats too strongly through his works
ever to permit the artist to deteriorate into
a mere maker of pastiches. And then again
the tradition of the earlier art is mani-
fested once more in the meticulous care
bestowed upon detail and in the smoothing
qualities of his technique ; one is always
conscious, however, of an adumbration'
of the Russian ikon, the result, doubtless,
of the earlier years of the artist having
been spent as an assistant to a provincial
painter of sacred subjects. 000

Portrait painters are naturally divided
into two classes—those who impose upon
their sitters the strong characteristics of
their own individuality, thus creating an
imaginary type upon which to base the
great variety of their models ; and the
other and larger group—to which Fedor
Zakharoff belongs—whose methods are
more subjective. Here the artist strives as
much as lies in his power to present the
individual, personal qualities of each model
and, treating them synthetically, attempts
to demonstrate as faithfully as possible the
many and varied aspects of humanity. And
this is the method adopted by Zakharoff
while endeavouring by means of carefully
considered details in the composition of
his picture to determine the actual sur-
roundings of the person portrayed. 0

A young poet is represented in Oriental
costume, the embodiment of all that
appertains to the ancient East, and yet on
the other hand the likeness of a young
Moscow engineer and his wife are strik-
ingly up-to-date. Another side of Zakha-
roff's temperament comes out in portraits
which show a striving after truth in an
endeavour to avoid embellishment of the
individual. 00000

This applies also to his miniature por-
traits, where, especially in the case of
women, tradition allows a certain amount
of latitude in the way of beautification. But
Zakharoff stands firm as a truth-loving
portrayer with a keen eye to all that is
characteristic, never permitting for one
moment the reality of life to be sacrificed
to beauty's ideals. The examples here re-
produced will suffice to confirm this, and
give some idea of his performance. 0

THE BRITISH GOVERNMENT
PAVILION AND THE BASILICA AT
WEMBLEY. BY HERBERT B.
GRIMSD1TCH, B.A. 000

THE first impression the observer
receives from H.M. Government
Pavilion at the British Empire Exhibition
is one of solidity, not to say stolidity,
both of which qualities have been ascribed
to our race, the first by our friends and
the second by our adverse critics. Viewed
from the side, the building is almost
barrack-like in its outlines : from the
front, this somewhat excessive severity
is less apparent, being exchanged for an
austerity not inappropriate in a govern-
ment office of a great empire though of
doubtful fitness for an exhibition. The
building is, however, an interesting ex-
ample of what can be done in reinforced
concrete, without covering up the material
or distracting attention from it by the addi-
tion of sculpture. The lions at the entrance
have been contrasted with Landseer's
much-maligned beasts in Trafalgar Square,
to the disparagement of these last. They
are certainly modelled with greater verve
but their countenances call up problems
of interpretation not dissimilar to those
presented by the famous smile of the
Monna Lisa : one might have expected
them to look fierce or grim, but in point
of fact they wear a kind of smug smirk,
which calls up the old reproach of " VAlbion
perf.de," which was at one time levelled at
us, and which we rightly resent so much.