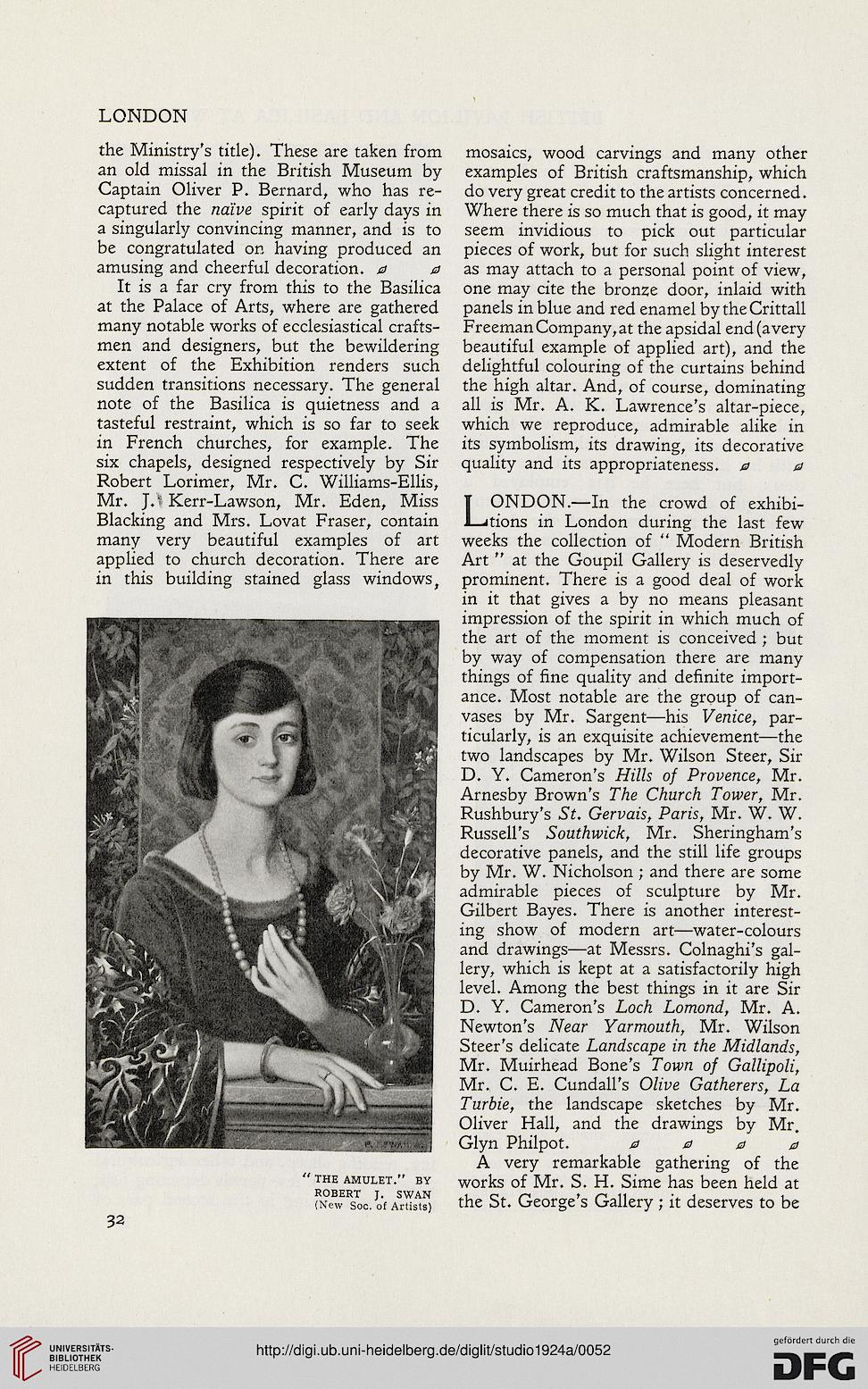 the Ministry's title). These are taken from
an old missal in the British Museum by
Captain Oliver P. Bernard, who has re-
captured the naive spirit of early days in
a singularly convincing manner, and is to
be congratulated on having produced an
amusing and cheerful decoration, a a
It is a far cry from this to the Basilica
at the Palace of Arts, where are gathered
many notable works of ecclesiastical crafts-
men and designers, but the bewildering
extent of the Exhibition renders such
sudden transitions necessary. The general
note of the Basilica is quietness and a
tasteful restraint, which is so far to seek
in French churches, for example. The
six chapels, designed respectively by Sir
Robert Lorimer, Mr. C. Williams-Ellis,
Mr. J J Kerr-Lawson, Mr. Eden, Miss
Blacking and Mrs. Lovat Fraser, contain
many very beautiful examples of art
applied to church decoration. There are
in this building stained glass windows,

mosaics, wood carvings and many other
examples of British craftsmanship, which
do very great credit to the artists concerned.
Where there is so much that is good, it may
seem invidious to pick out particular
pieces of work, but for such slight interest
as may attach to a personal point of view,
one may cite the bronze door, inlaid with
panels in blue and red enamel by theCrittall
Freeman Company, at the apsidal end (a very
beautiful example of applied art), and the
delightful colouring of the curtains behind
the high altar. And, of course, dominating
all is Mr. A. K. Lawrence's altar-piece,
which we reproduce, admirable alike in
its symbolism, its drawing, its decorative
quality and its appropriateness. e> a

LONDON.—In the crowd of exhibi-
tions in London during the last few
weeks the collection of " Modern British
Art " at the Goupil Gallery is deservedly
prominent. There is a good deal of work
in it that gives a by no means pleasant
impression of the spirit in which much of
the art of the moment is conceived ; but
by way of compensation there are many
things of fine quality and definite import-
ance. Most notable are the group of can-
vases by Mr. Sargent—his Venice, par-
ticularly, is an exquisite achievement—the
two landscapes by Mr. Wilson Steer, Sir
D. Y. Cameron's Hills of Provence, Mr.
Arnesby Brown's The Church Tower, Mr.
Rushbury's St. Gervais, Paris, Mr. W. W.
Russell's Southwick, Mr. Sheringham's
decorative panels, and the still life groups
by Mr. W. Nicholson ; and there are some
admirable pieces of sculpture by Mr.
Gilbert Bayes. There is another interest-
ing show of modern art—water-colours
and drawings—at Messrs. Colnaghi's gal-
lery, which is kept at a satisfactorily high
level. Among the best things in it are Sir
D. Y. Cameron's Loch Lomond, Mr. A.
Newton's Near Yarmouth, Mr. Wilson
Steer's delicate Landscape in the Midlands,
Mr. Muirhead Bone's Town of Gallipoli,
Mr. C. E. Cundall's Olive Gatherers, La
Turbie, the landscape sketches by Mr.
Oliver Hall, and the drawings by Mr.
Glyn Philpot. a a a a

A very remarkable gathering of the
works of Mr. S. H. Sime has been held at
the St. George's Gallery ; it deserves to be