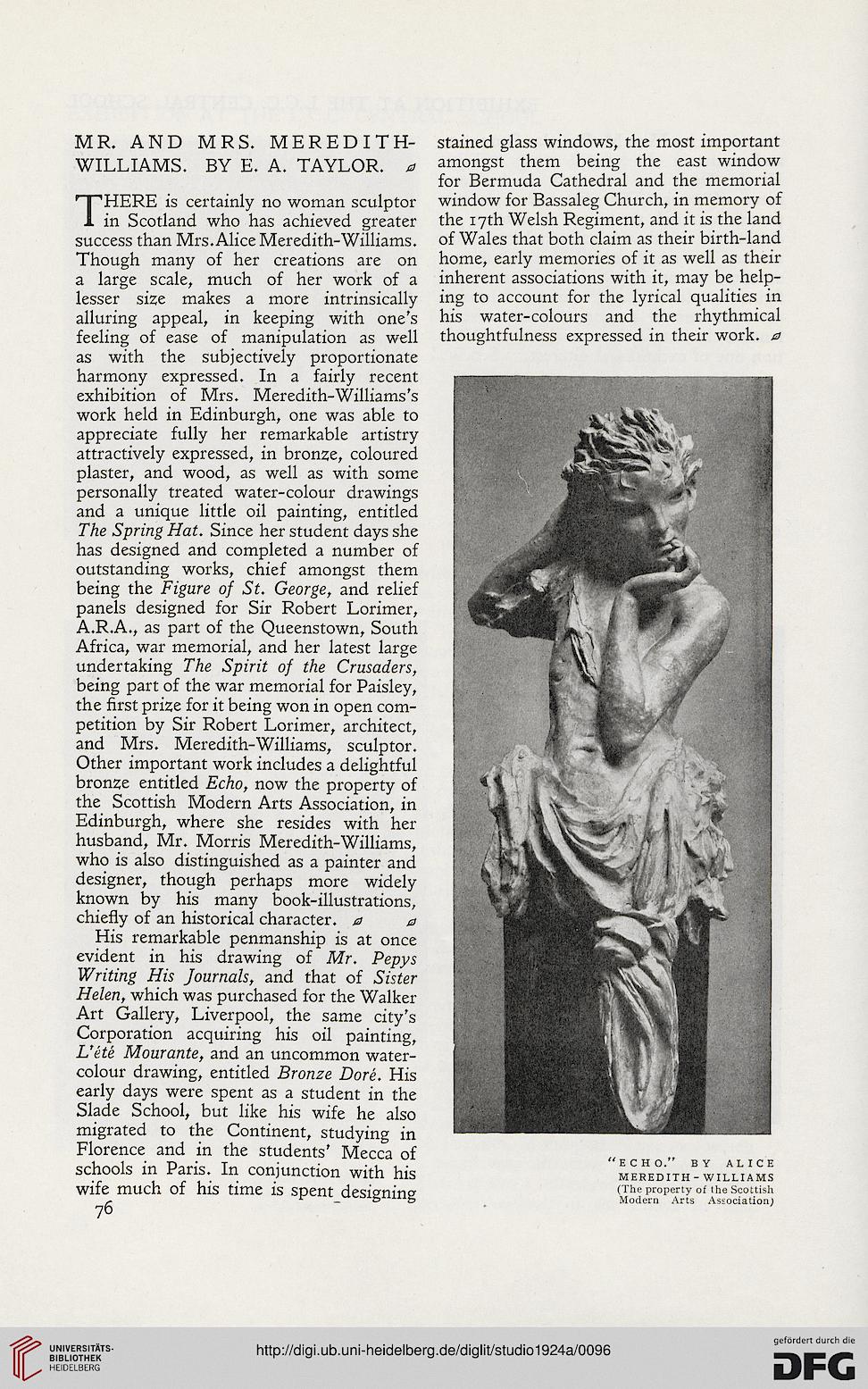 Information about OCR text
MR. AND MRS. MEREDITH-
WILLIAMS. BY E. A. TAYLOR, a

THERE is certainly no woman sculptor
in Scotland who has achieved greater
success than Mrs. Alice Meredith-Williams.
Though many of her creations are on
a large scale, much of her work of a
lesser size makes a more intrinsically
alluring appeal, in keeping with one's
feeling of ease of manipulation as well
as with the subjectively proportionate
harmony expressed. In a fairly recent
exhibition of Mrs. Meredith-Williams's
work held in Edinburgh, one was able to
appreciate fully her remarkable artistry
attractively expressed, in bronze, coloured
plaster, and wood, as well as with some
personally treated water-colour drawings
and a unique little oil painting, entitled
The Spring Hat. Since her student days she
has designed and completed a number of
outstanding works, chief amongst them
being the Figure of St. George, and relief
panels designed for Sir Robert Lorimer,
A.R.A., as part of the Queenstown, South
Africa, war memorial, and her latest large
undertaking The Spirit of the Crusaders,
being part of the war memorial for Paisley,
the first prize for it being won in open com-
petition by Sir Robert Lorimer, architect,
and Mrs. Meredith-Williams, sculptor.
Other important work includes a delightful
bronze entitled Echo, now the property of
the Scottish Modern Arts Association, in
Edinburgh, where she resides with her
husband, Mr. Morris Meredith-Williams,
who is also distinguished as a painter and
designer, though perhaps more widely
known by his many book-illustrations,
chiefly of an historical character, a a
His remarkable penmanship is at once
evident in his drawing of Mr. Pepys
Writing His Journals, and that of Sister
Helen, which was purchased for the Walker
Art Gallery, Liverpool, the same city's
Corporation acquiring his oil painting,
L'ete Mourante, and an uncommon water-
colour drawing, entitled Bronze Dore. His
early days were spent as a student in the
Slade School, but like his wife he also
migrated to the Continent, studying in
Florence and in the students' Mecca of
schools in Paris. In conjunction with his
wife much of his time is spent designing
76

stained glass windows, the most important
amongst them being the east window
for Bermuda Cathedral and the memorial
window for Bassaleg Church, in memory of
the 17th Welsh Regiment, and it is the land
of Wales that both claim as their birth-land
home, early memories of it as well as their
inherent associations with it, may be help-
ing to account for the lyrical qualities in
his water-colours and the rhythmical
thoughtfulness expressed in their work. 0

(The property of the Scottish
Modern Arts Association)