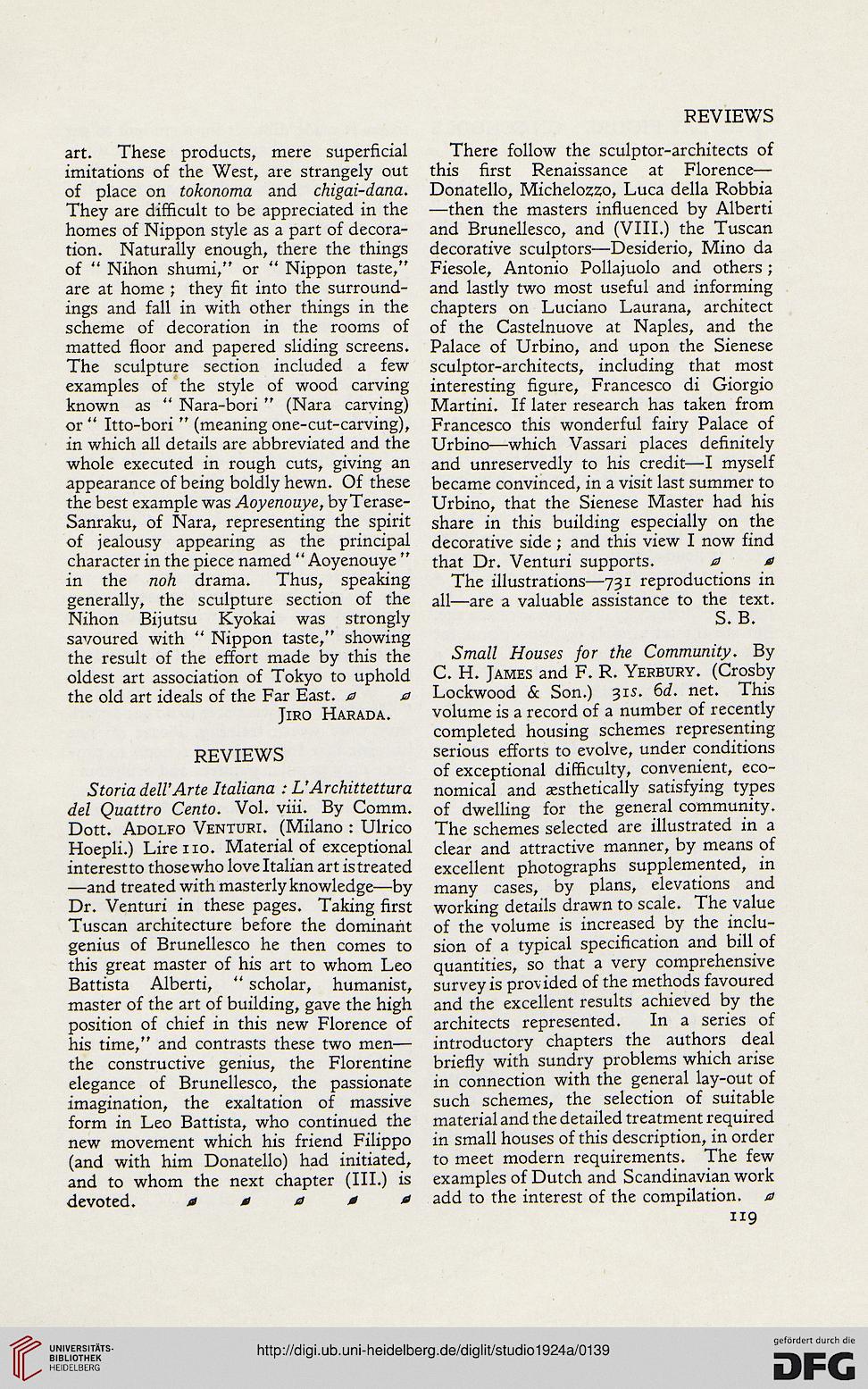 art. These products, mere superficial
imitations of the West, are strangely out
of place on tokonoma and chigai-dana.
They are difficult to be appreciated in the
homes of Nippon style as a part of decora-
tion. Naturally enough, there the things
of " Nihon shumi," or " Nippon taste,"
are at home ; they fit into the surround-
ings and fall in with other things in the
scheme of decoration in the rooms of
matted floor and papered sliding screens.
The sculpture section included a few
examples of the style of wood carving
known as " Nara-bori " (Nara carving)
or " Itto-bori " (meaning one-cut-carving),
in which all details are abbreviated and the
whole executed in rough cuts, giving an
appearance of being boldly hewn. Of these
the best example was Aoyenouye, byTerase-
Sanraku, of Nara, representing the spirit
of jealousy appearing as the principal
character in the piece named " Aoyenouye "
in the noh drama. Thus, speaking
generally, the sculpture section of the
Nihon Bijutsu Kyokai was strongly
savoured with " Nippon taste," showing
the result of the effort made by this the
oldest art association of Tokyo to uphold
the old art ideals of the Far East. a a

Storia dell'Arte Italiana : UArchittettura
del Quattro Cento. Vol. viii. By Comm.
Dott. Adolfo Venturi. (Milano : Ulrico
Hoepli.) Lire no. Material of exceptional
interestto thosewho love Italian art is treated
—and treated with masterly knowledge—by
Dr. Venturi in these pages. Taking first
Tuscan architecture before the dominant
genius of Brunellesco he then comes to
this great master of his art to whom Leo
Battista Alberti, " scholar, humanist,
master of the art of building, gave the high
position of chief in this new Florence of
his time," and contrasts these two men—
the constructive genius, the Florentine
elegance of Brunellesco, the passionate
imagination, the exaltation of massive
form in Leo Battista, who continued the
new movement which his friend Filippo
(and with him Donatello) had initiated,
and to whom the next chapter (III.) is
devoted. 00000

There follow the sculptor-architects of
this first Renaissance at Florence—
Donatello, Michelozzo, Luca della Robbia
—then the masters influenced by Alberti
and Brunellesco, and (VIII.) the Tuscan
decorative sculptors—Desiderio, Mino da
Fiesole, Antonio Pollajuolo and others;
and lastly two most useful and informing
chapters on Luciano Laurana, architect
of the Castelnuove at Naples, and the
Palace of Urbino, and upon the Sienese
sculptor-architects, including that most
interesting figure, Francesco di Giorgio
Martini. If later research has taken from
Francesco this wonderful fairy Palace of
Urbino—which Vassari places definitely
and unreservedly to his credit—I myself
became convinced, in a visit last summer to
Urbino, that the Sienese Master had his
share in this building especially on the
decorative side; and this view I now find
that Dr. Venturi supports. a 0

The illustrations—731 reproductions in
all—are a valuable assistance to the text.

Small Houses for the Community. By
C. H. James and F. R. Yerbury. (Crosby
Lockwood & Son.) 31s. 6d. net. This
volume is a record of a number of recently
completed housing schemes representing
serious efforts to evolve, under conditions
of exceptional difficulty, convenient, eco-
nomical and aesthetically satisfying types
of dwelling for the general community.
The schemes selected are illustrated in a
clear and attractive manner, by means of
excellent photographs supplemented, in
many cases, by plans, elevations and
working details drawn to scale. The value
of the volume is increased by the inclu-
sion of a typical specification and bill of
quantities, so that a very comprehensive
survey is provided of the methods favoured
and the excellent results achieved by the
architects represented. In a series of
introductory chapters the authors deal
briefly with sundry problems which arise
in connection with the general lay-out of
such schemes, the selection of suitable
material and the detailed treatment required
in small houses of this description, in order
to meet modern requirements. The few
examples of Dutch and Scandinavian work
add to the interest of the compilation. 0