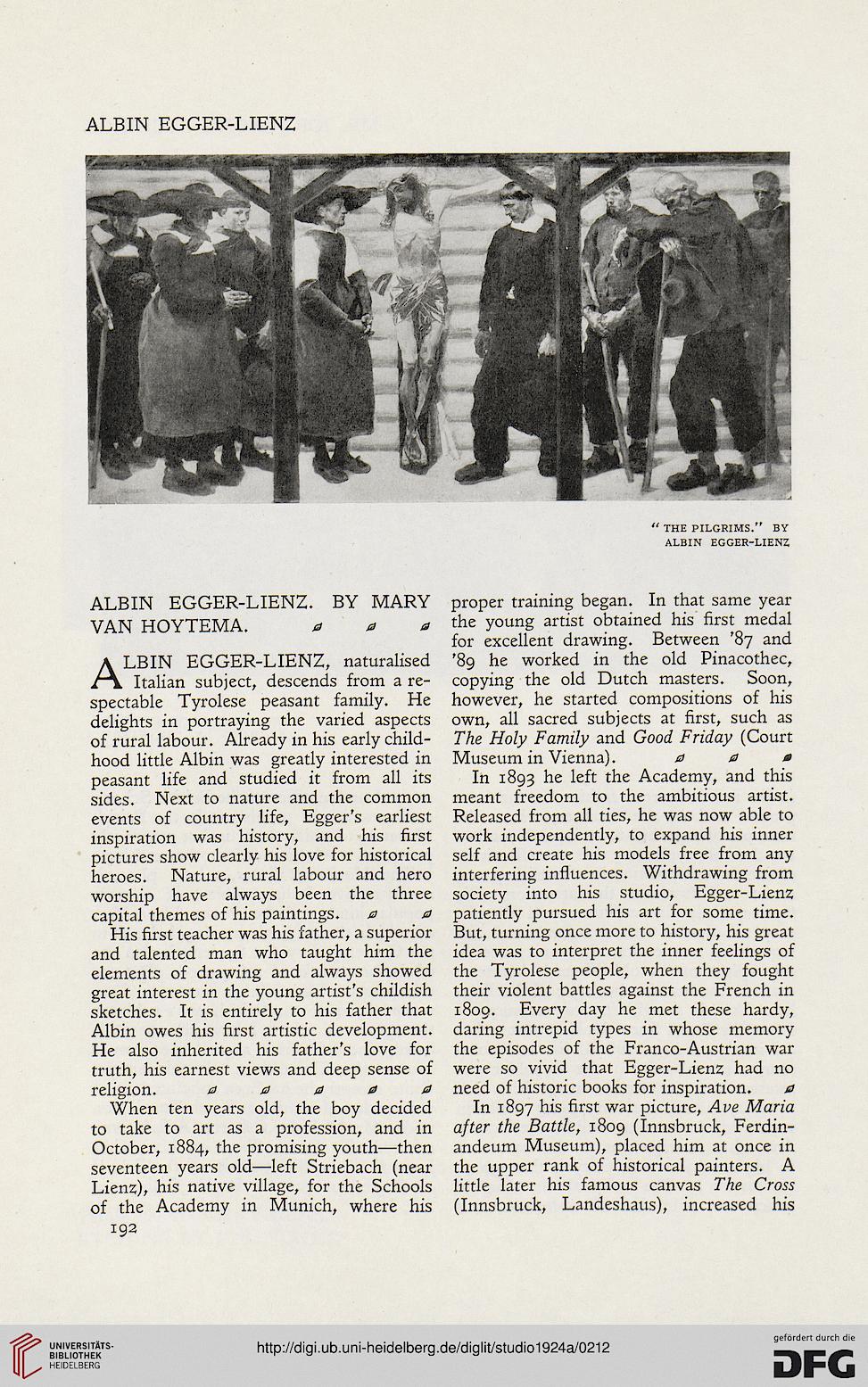 " THE PILGRIMS." BY
ALBIN EGGER-LIENZ

ALBIN EGGER-LIENZ, naturalised
Italian subject, descends from a re-
spectable Tyrolese peasant family. He
delights in portraying the varied aspects
of rural labour. Already in his early child-
hood little Albin was greatly interested in
peasant life and studied it from all its
sides. Next to nature and the common
events of country life, Egger's earliest
inspiration was history, and his first
pictures show clearly his love for historical
heroes. Nature, rural labour and hero
worship have always been the three
capital themes of his paintings. 0 0
His first teacher was his father, a superior
and talented man who taught him the
elements of drawing and always showed
great interest in the young artist's childish
sketches. It is entirely to his father that
Albin owes his first artistic development.
He also inherited his father's love for
truth, his earnest views and deep sense of
religion. a a a 0 a
When ten years old, the boy decided
to take to art as a profession, and in
October, 1884, the promising youth—then
seventeen years old—left Striebach (near
Lienz), his native village, for the Schools
of the Academy in Munich, where his
192

proper training began. In that same year
the young artist obtained his first medal
for excellent drawing. Between '87 and
'89 he worked in the old Pinacothec,
copying the old Dutch masters. Soon,
however, he started compositions of his
own, all sacred subjects at first, such as
The Holy Family and Good Friday (Court
Museum in Vienna). 000

In 1893 ne feft tne Academy, and this
meant freedom to the ambitious artist.
Released from all ties, he was now able to
work independently, to expand his inner
self and create his models free from any
interfering influences. Withdrawing from
society into his studio, Egger-Lienz
patiently pursued his art for some time.
But, turning once more to history, his great
idea was to interpret the inner feelings of
the Tyrolese people, when they fought
their violent battles against the French in
1800. Every day he met these hardy,
daring intrepid types in whose memory
the episodes of the Franco-Austrian war
were so vivid that Egger-Lienz had no
need of historic books for inspiration. 0

In 1897 his first war picture, Ave Maria
after the Battle, 1809 (Innsbruck, Ferdin-
andeum Museum), placed him at once in
the upper rank of historical painters. A
little later his famous canvas The Cross
(Innsbruck, Landeshaus), increased his