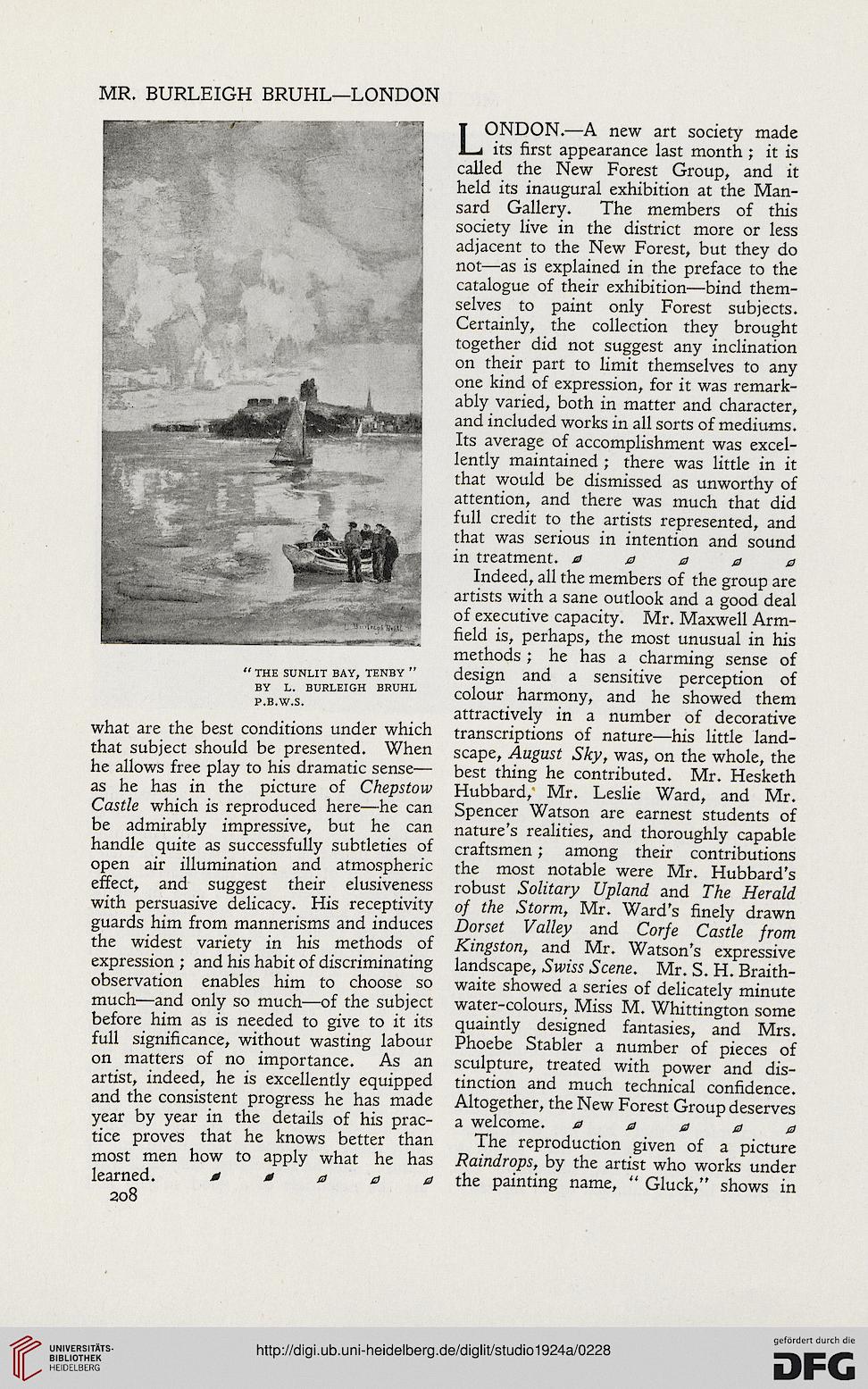 what are the best conditions under which
that subject should be presented. When
he allows free play to his dramatic sense—
as he has in the picture of Chepstow
Castle which is reproduced here—he can
be admirably impressive, but he can
handle quite as successfully subtleties of
open air illumination and atmospheric
effect, and suggest their elusiveness
with persuasive delicacy. His receptivity
guards him from mannerisms and induces
the widest variety in his methods of
expression ; and his habit of discriminating
observation enables him to choose so
much—and only so much—of the subject
before him as is needed to give to it its
full significance, without wasting labour
on matters of no importance. As an
artist, indeed, he is excellently equipped
and the consistent progress he has made
year by year in the details of his prac-
tice proves that he knows better than
most men how to apply what he has
learned. 0 0 a a a
208

LONDON.—A new art society made
its first appearance last month ; it is
called the New Forest Group, and it
held its inaugural exhibition at the Man-
sard Gallery. The members of this
society live in the district more or less
adjacent to the New Forest, but they do
not—as is explained in the preface to the
catalogue of their exhibition—bind them-
selves to paint only Forest subjects.
Certainly, the collection they brought
together did not suggest any inclination
on their part to limit themselves to any
one kind of expression, for it was remark-
ably varied, both in matter and character,
and included works in all sorts of mediums.
Its average of accomplishment was excel-
lently maintained ; there was little in it
that would be dismissed as unworthy of
attention, and there was much that did
full credit to the artists represented, and
that was serious in intention and sound
in treatment, a a a a a
Indeed, all the members of the group are
artists with a sane outlook and a good deal
of executive capacity. Mr. Maxwell Arm-
field is, perhaps, the most unusual in his
methods ; he has a charming sense of
design and a sensitive perception of
colour harmony, and he showed them
attractively in a number of decorative
transcriptions of nature—his little land-
scape, August Sky, was, on the whole, the
best thing he contributed. Mr. Hesketh
Hubbard, Mr. Leslie Ward, and Mr.
Spencer Watson are earnest students of
nature's realities, and thoroughly capable
craftsmen; among their contributions
the most notable were Mr. Hubbard's
robust Solitary Upland and The Herald
of the Storm, Mr. Ward's finely drawn
Dorset Valley and Corfe Castle from
Kingston, and Mr. Watson's expressive
landscape, Swiss Scene. Mr. S. H. Braith-
waite showed a series of delicately minute
water-colours, Miss M. Whittington some
quaintly designed fantasies, and Mrs.
Phoebe Stabler a number of pieces of
sculpture, treated with power and dis-
tinction and much technical confidence.
Altogether, the New Forest Group deserves
a welcome. a a a a a
The reproduction given of a picture
Raindrops, by the artist who works under
the painting name, " Gluck," shows in