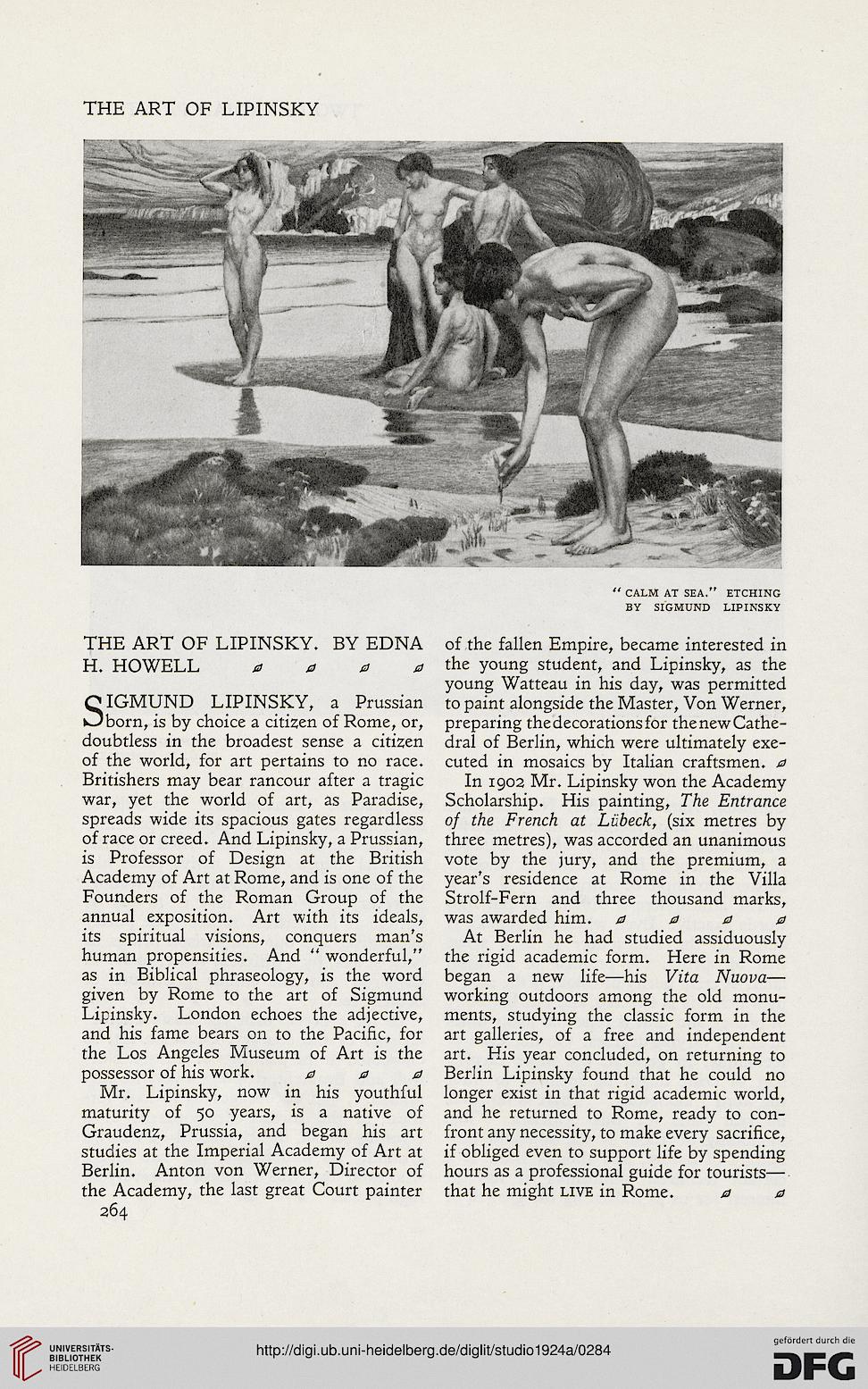 Information about OCR text
THE ART OF LIPINSKY

THE ART OF LIPINSKY. BY EDNA of the fallen Empire, became interested in

H. HOWELL a a a a the young student, and Lipinsky, as the

young Watteau in his day, was permitted

SIGMUND LIPINSKY, a Prussian to paint alongside the Master, Von Werner,

born, is by choice a citizen of Rome, or, preparing the decorations for thenewCathe-

doubtless in the broadest sense a citizen dral of Berlin, which were ultimately exe-

of the world, for art pertains to no race, cuted in mosaics by Italian craftsmen, a

Britishers may bear rancour after a tragic In 1902 Mr. Lipinsky won the Academy

war, yet the world of art, as Paradise, Scholarship. His painting, The Entrance

spreads wide its spacious gates regardless of the French at Liibeck, (six metres by

of race or creed. And Lipinsky, a Prussian, three metres), was accorded an unanimous

is Professor of Design at the British vote by the jury, and the premium, a

Academy of Art at Rome, and is one of the year's residence at Rome in the Villa

Founders of the Roman Group of the Strolf-Fern and three thousand marks,

annual exposition. Art with its ideals, was awarded him. a a 0 a

its spiritual visions, conquers man's At Berlin he had studied assiduously

as in Biblical phraseology, is the word began a new life—his Vita Nuova—

Lipinsky. London echoes the adjective, ments, studying the classic form in the

and his fame bears on to the Pacific, for art galleries, of a free and independent

the Los Angeles Museum of Art is the art. His year concluded, on returning to

possessor of his work. a a a Berlin Lipinsky found that he could no

Mr. Lipinsky, now in his youthful longer exist in that rigid academic world,

maturity of 50 years, is a native of and he returned to Rome, ready to con-

Graudenz, Prussia, and began his art front any necessity, to make every sacrifice,

Berlin. Anton von Werner, Director of hours as a professional guide for tourists—

the Academy, the last great Court painter that he might live in Rome. a a
264