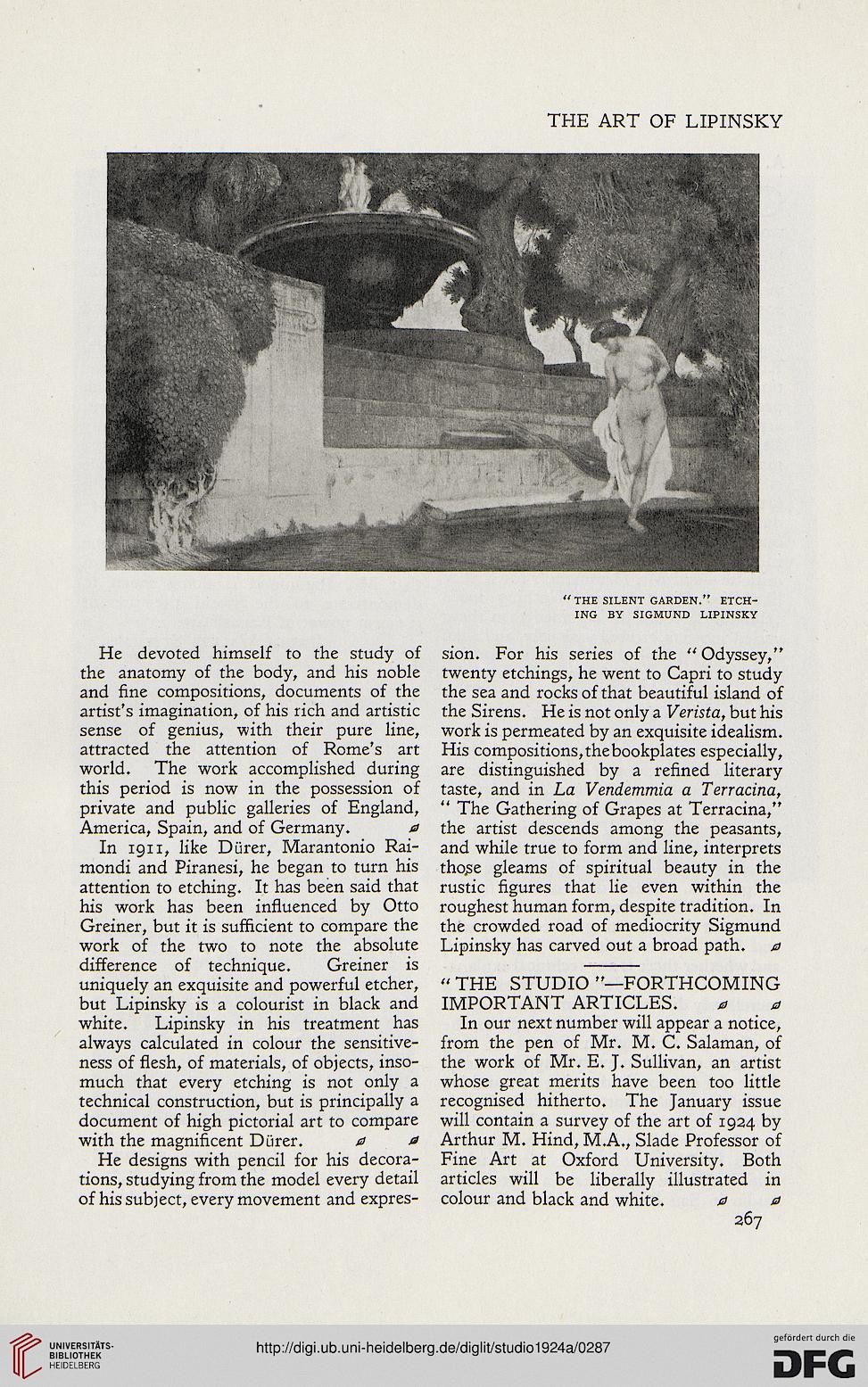 Information about OCR text
THE ART OF LIPINSKY

He devoted himself to the study of
the anatomy of the body, and his noble
and fine compositions, documents of the
artist's imagination, of his rich and artistic
sense of genius, with their pure line,
attracted the attention of Rome's art
world. The work accomplished during
this period is now in the possession of
private and public galleries of England,
America, Spain, and of Germany. 0

In 1911, like Durer, Marantonio Rai-
mondi and Piranesi, he began to turn his
attention to etching. It has been said that
his work has been influenced by Otto
Greiner, but it is sufficient to compare the
work of the two to note the absolute
difference of technique. Greiner is
uniquely an exquisite and powerful etcher,
but Lipinsky is a colourist in black and
white. Lipinsky in his treatment has
always calculated in colour the sensitive-
ness of flesh, of materials, of objects, inso-
much that every etching is not only a
technical construction, but is principally a
document of high pictorial art to compare
with the magnificent Durer. 0 0

He designs with pencil for his decora-
tions, studying from the model every detail
of his subject, every movement and expres-

sion. For his series of the " Odyssey,"
twenty etchings, he went to Capri to study
the sea and rocks of that beautiful island of
the Sirens. He is not only a Verista, but his
work is permeated by an exquisite idealism.
His compositions, the bookplates especially,
are distinguished by a refined literary
taste, and in La Vendemmia a Terracina,
" The Gathering of Grapes at Terracina,"
the artist descends among the peasants,
and while true to form and line, interprets
thojse gleams of spiritual beauty in the
rustic figures that lie even within the
roughest human form, despite tradition. In
the crowded road of mediocrity Sigmund
Lipinsky has carved out a broad path, 0

« THE STUDIO "—FORTHCOMING
IMPORTANT ARTICLES. 0 a
In our next number will appear a notice,
from the pen of Mr. M. C. Salaman, of
the work of Mr. E. J. Sullivan, an artist
whose great merits have been too little
recognised hitherto. The January issue
will contain a survey of the art of 1924 by
Arthur M. Hind, M.A., Slade Professor of
Fine Art at Oxford University. Both
articles will be liberally illustrated in
colour and black and white. 0 0