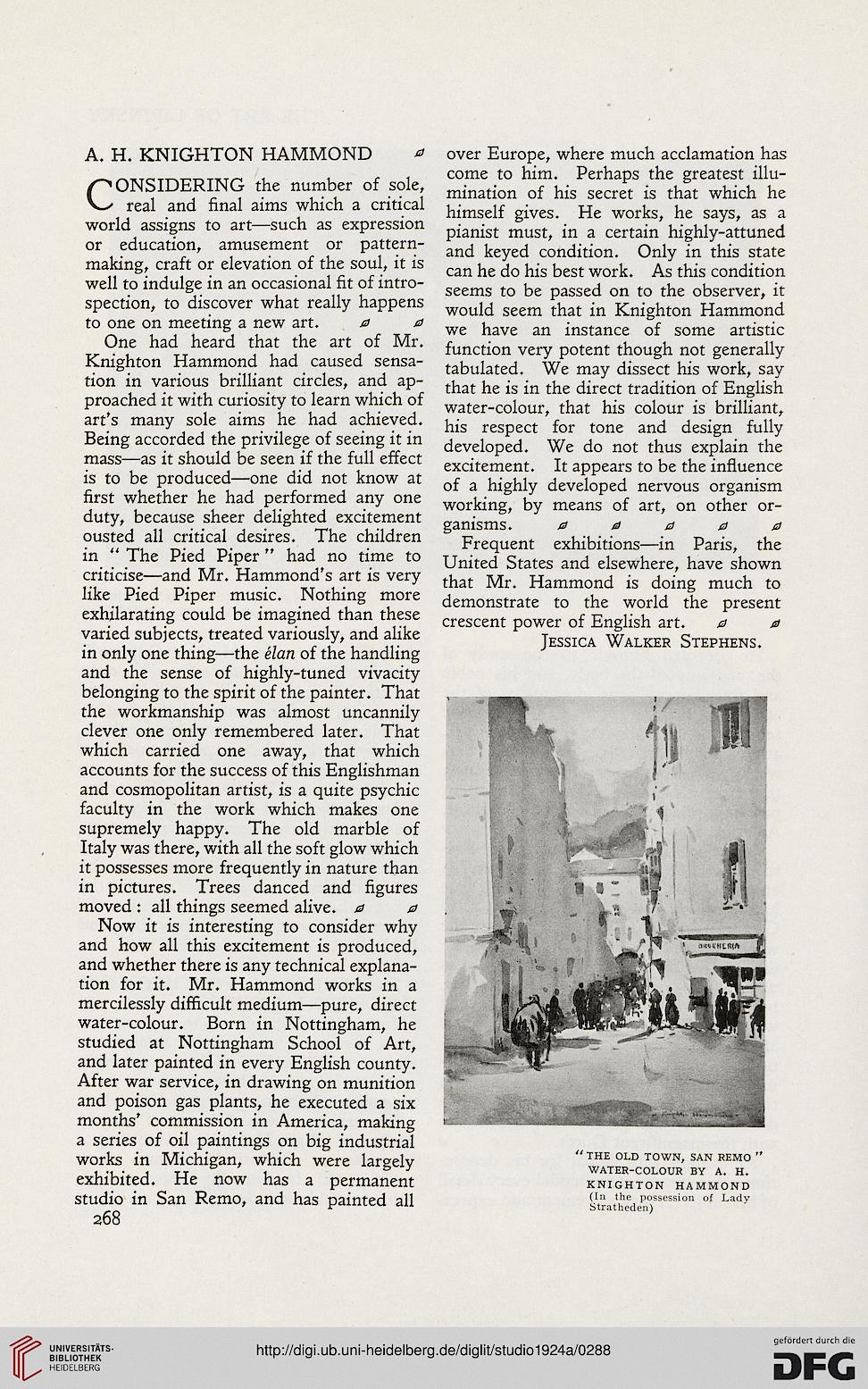 CONSIDERING the number of sole,
real and final aims which a critical
world assigns to art—such as expression
or education, amusement or pattern-
making, craft or elevation of the soul, it is
well to indulge in an occasional fit of intro-
spection, to discover what really happens
to one on meeting a new art. a a
One had heard that the art of Mr.
Knighton Hammond had caused sensa-
tion in various brilliant circles, and ap-
proached it with curiosity to learn which of
art's many sole aims he had achieved.
Being accorded the privilege of seeing it in
mass—as it should be seen if the full effect
is to be produced—one did not know at
first whether he had performed any one
duty, because sheer delighted excitement
ousted all critical desires. The children
in " The Pied Piper" had no time to
criticise—and Mr. Hammond's art is very
like Pied Piper music. Nothing more
exhilarating could be imagined than these
varied subjects, treated variously, and alike
in only one thing—the elan of the handling
and the sense of highly-tuned vivacity
belonging to the spirit of the painter. That
the workmanship was almost uncannily
clever one only remembered later. That
which carried one away, that which
accounts for the success of this Englishman
and cosmopolitan artist, is a quite psychic
faculty in the work which makes one
supremely happy. The old marble of
Italy was there, with all the soft glow which
it possesses more frequently in nature than
in pictures. Trees danced and figures
moved : all things seemed alive. 0 a
Now it is interesting to consider why
and how all this excitement is produced,
and whether there is any technical explana-
tion for it. Mr. Hammond works in a
mercilessly difficult medium—pure, direct
water-colour. Born in Nottingham, he
studied at Nottingham School of Art,
and later painted in every English county.
After war service, in drawing on munition
and poison gas plants, he executed a six
months' commission in America, making
a series of oil paintings on big industrial
works in Michigan, which were largely
exhibited. He now has a permanent
studio in San Remo, and has painted all
268

over Europe, where much acclamation has
come to him. Perhaps the greatest illu-
mination of his secret is that which he
himself gives. He works, he says, as a
pianist must, in a certain highly-attuned
and keyed condition. Only in this state
can he do his best work. As this condition
seems to be passed on to the observer, it
would seem that in Knighton Hammond
we have an instance of some artistic
function very potent though not generally
tabulated. We may dissect his work, say
that he is in the direct tradition of English
water-colour, that his colour is brilliant,
his respect for tone and design fully
developed. We do not thus explain the
excitement. It appears to be the influence
of a highly developed nervous organism
working, by means of art, on other or-
ganisms, a a a a a
Frequent exhibitions—in Paris, the
United States and elsewhere, have shown
that Mr. Hammond is doing much to
demonstrate to the world the present
crescent power of English art. a a
Jessica Walker Stephens.

(In the possession of Lady
Stratheden)