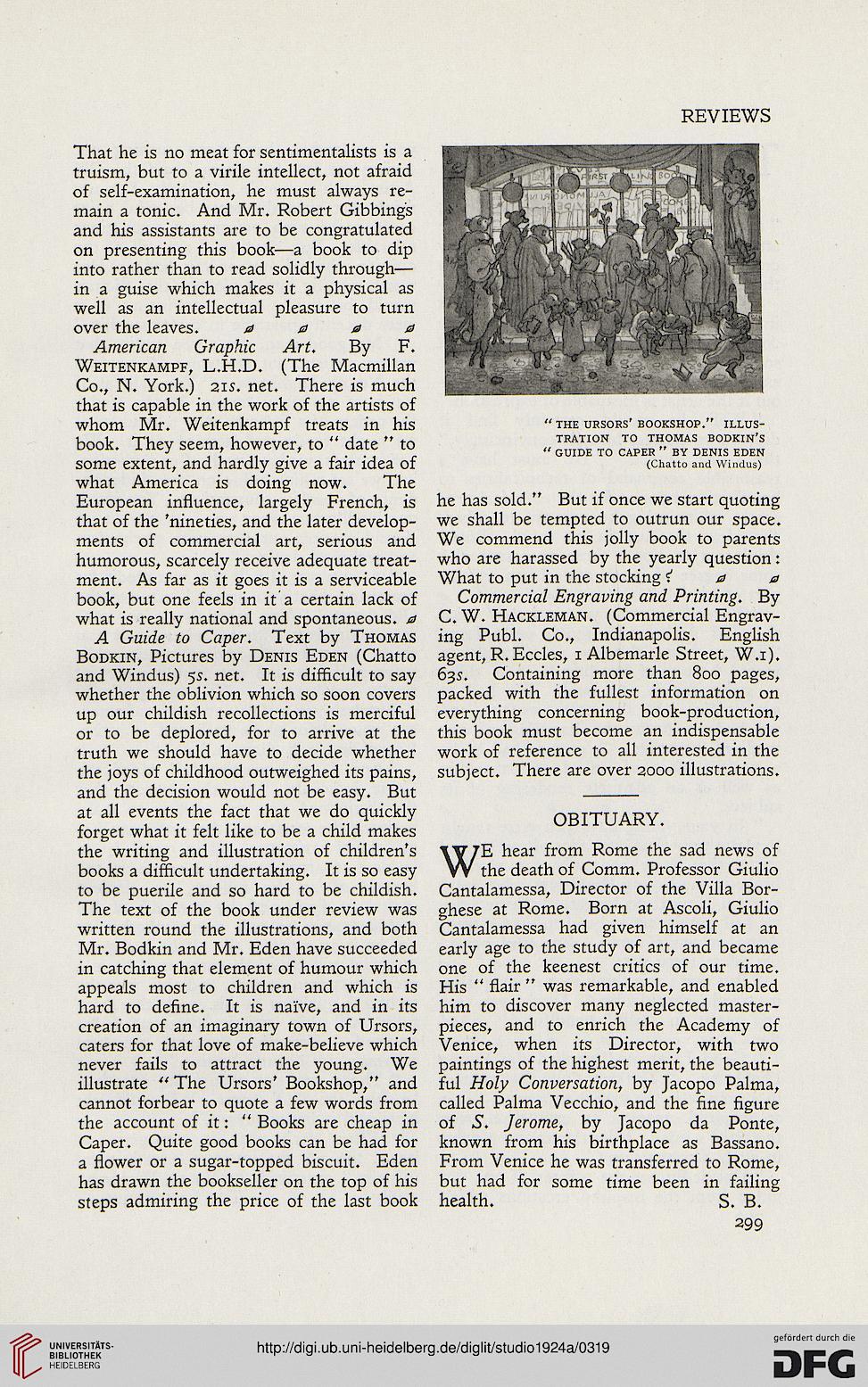 That he is no meat for sentimentalists is a
truism, but to a virile intellect, not afraid
of self-examination, he must always re-
main a tonic. And Mr. Robert Gibbings
and his assistants are to be congratulated
on presenting this book—a book to dip
into rather than to read solidly through—
in a guise which makes it a physical as
well as an intellectual pleasure to turn
over the leaves. 0 0 0 0

American Graphic Art. By F.
Weitenkampf, L.H.D. (The Macmillan
Co., N. York.) 21s. net. There is much
that is capable in the work of the artists of
whom Mr. Weitenkampf treats in his
book. They seem, however, to " date " to
some extent, and hardly give a fair idea of
what America is doing now. The
European influence, largely French, is
that of the 'nineties, and the later develop-
ments of commercial art, serious and
humorous, scarcely receive adequate treat-
ment. As far as it goes it is a serviceable
book, but one feels in it a certain lack of
what is really national and spontaneous, 0

A Guide to Caper. Text by Thomas
Bodkin, Pictures by Denis Eden (Chatto
and Windus) 5s. net. It is difficult to say
whether the oblivion which so soon covers
up our childish recollections is merciful
or to be deplored, for to arrive at the
truth we should have to decide whether
the joys of childhood outweighed its pains,
and the decision would not be easy. But
at all events the fact that we do quickly
forget what it felt like to be a child makes
the writing and illustration of children's
books a difficult undertaking. It is so easy
to be puerile and so hard to be childish.
The text of the book under review was
written round the illustrations, and both
Mr. Bodkin and Mr, Eden have succeeded
in catching that element of humour which
appeals most to children and which is
hard to define. It is naive, and in its
creation of an imaginary town of Ursors,
caters for that love of make-believe which
never fails to attract the young. We
illustrate " The Ursors' Bookshop," and
cannot forbear to quote a few words from
the account of it: " Books are cheap in
Caper. Quite good books can be had for
a flower or a sugar-topped biscuit. Eden
has drawn the bookseller on the top of his
steps admiring the price of the last book

he has sold." But if once we start quoting
we shall be tempted to outrun our space.
We commend this jolly book to parents
who are harassed by the yearly question:
What to put in the stocking i 0 0
Commercial Engraving and Printing. By
C. W. Hackleman. (Commercial Engrav-
ing Publ. Co., Indianapolis. English
agent, R. Eccles, 1 Albemarle Street, W.i).
63s. Containing more than 800 pages,
packed with the fullest information on
everything concerning book-production,
this book must become an indispensable
work of reference to all interested in the
subject. There are over 2000 illustrations.

WE hear from Rome the sad news of
the death of Comm. Professor Giulio
Cantalamessa, Director of the Villa Bor-
ghese at Rome. Born at Ascoli, Giulio
Cantalamessa had given himself at an
early age to the study of art, and became
one of the keenest critics of our time.
His " flair " was remarkable, and enabled
him to discover many neglected master-
pieces, and to enrich the Academy of
Venice, when its Director, with two
paintings of the highest merit, the beauti-
ful Holy Conversation, by Jacopo Palma,
called Palma Vecchio, and the fine figure
of S. Jerome, by Jacopo da Ponte,
known from his birthplace as Bassano.
From Venice he was transferred to Rome,
but had for some time been in failing
health. S. B.