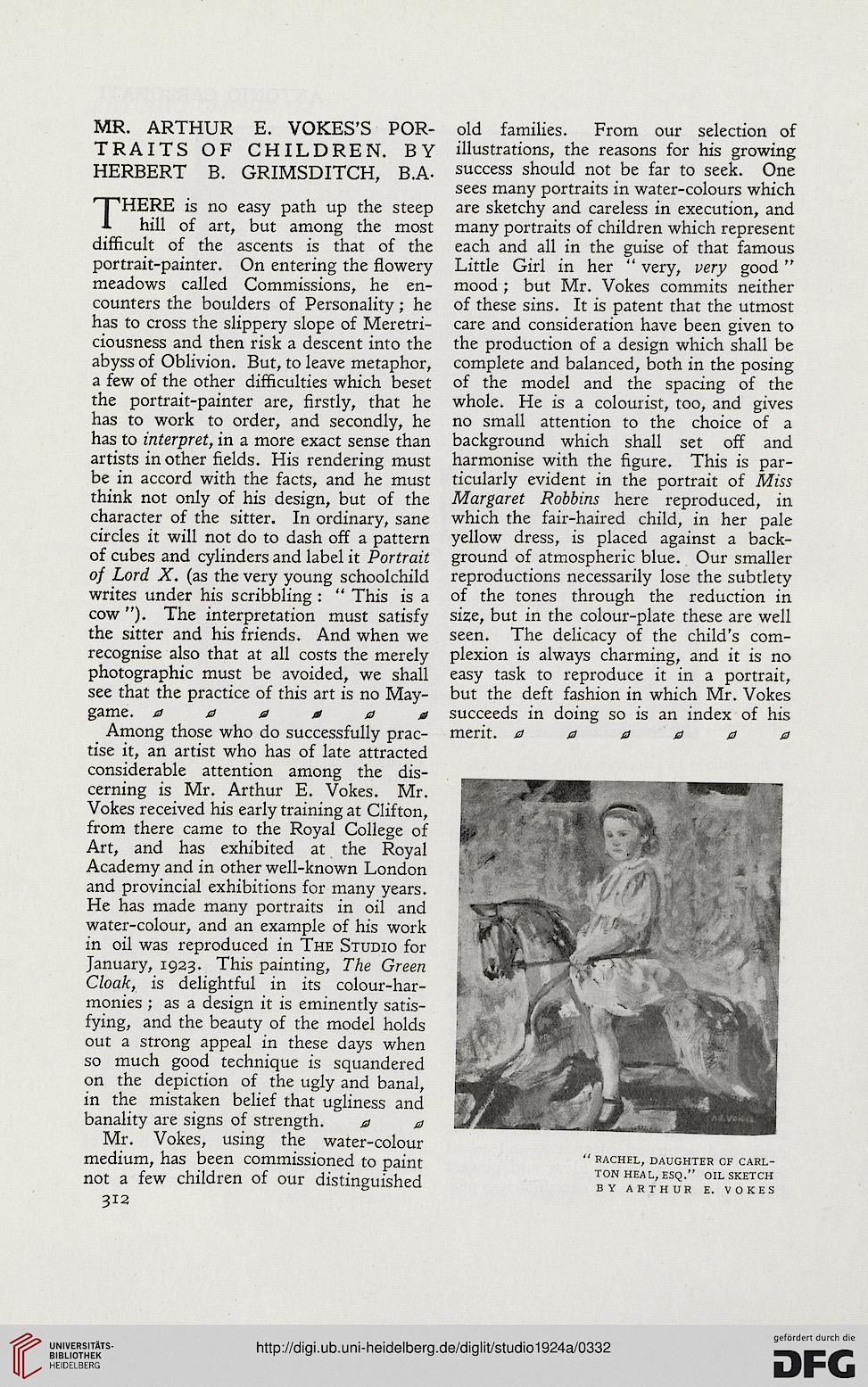 THERE is no easy path up the steep
hill of art, but among the most
difficult of the ascents is that of the
portrait-painter. On entering the flowery
meadows called Commissions, he en-
counters the boulders of Personality; he
has to cross the slippery slope of Meretri-
ciousness and then risk a descent into the
abyss of Oblivion. But, to leave metaphor,
a few of the other difficulties which beset
the portrait-painter are, firstly, that he
has to work to order, and secondly, he
has to interpret, in a more exact sense than
artists in other fields. His rendering must
be in accord with the facts, and he must
think not only of his design, but of the
character of the sitter. In ordinary, sane
circles it will not do to dash off a pattern
of cubes and cylinders and label it Portrait
of Lord X. (as the very young schoolchild
writes under his scribbling : " This is a
cow "). The interpretation must satisfy
the sitter and his friends. And when we
recognise also that at all costs the merely
photographic must be avoided, we shall
see that the practice of this art is no May-
game. 0 0 a 0 a a
Among those who do successfully prac-
tise it, an artist who has of late attracted
considerable attention among the dis-
cerning is Mr. Arthur E. Vokes. Mr.
Vokes received his early training at Clifton,
from there came to the Royal College of
Art, and has exhibited at the Royal
Academy and in other well-known London
and provincial exhibitions for many years.
He has made many portraits in oil and
water-colour, and an example of his work
in oil was reproduced in The Studio for
January, 1923. This painting, The Green
Cloak, is delightful in its colour-har-
monies ; as a design it is eminently satis-
fying, and the beauty of the model holds
out a strong appeal in these days when
so much good technique is squandered
on the depiction of the ugly and banal,
in the mistaken belief that ugliness and
banality are signs of strength. 0 0
Mr. Vokes, using the water-colour
medium, has been commissioned to paint
not a few children of our distinguished
312

old families. From our selection of
illustrations, the reasons for his growing
success should not be far to seek. One
sees many portraits in water-colours which
are sketchy and careless in execution, and
many portraits of children which represent
each and all in the guise of that famous
Little Girl in her " very, very good"
mood ; but Mr. Vokes commits neither
of these sins. It is patent that the utmost
care and consideration have been given to
the production of a design which shall be
complete and balanced, both in the posing
of the model and the spacing of the
whole. He is a colourist, too, and gives
no small attention to the choice of a
background which shall set off and
harmonise with the figure. This is par-
ticularly evident in the portrait of Miss
Margaret Robbins here reproduced, in
which the fair-haired child, in her pale
yellow dress, is placed against a back-
ground of atmospheric blue. Our smaller
reproductions necessarily lose the subtlety
of the tones through the reduction in
size, but in the colour-plate these are well
seen. The delicacy of the child's com-
plexion is always charming, and it is no
easy task to reproduce it in a portrait,
but the deft fashion in which Mr. Vokes
succeeds in doing so is an index of his
merit. 000000