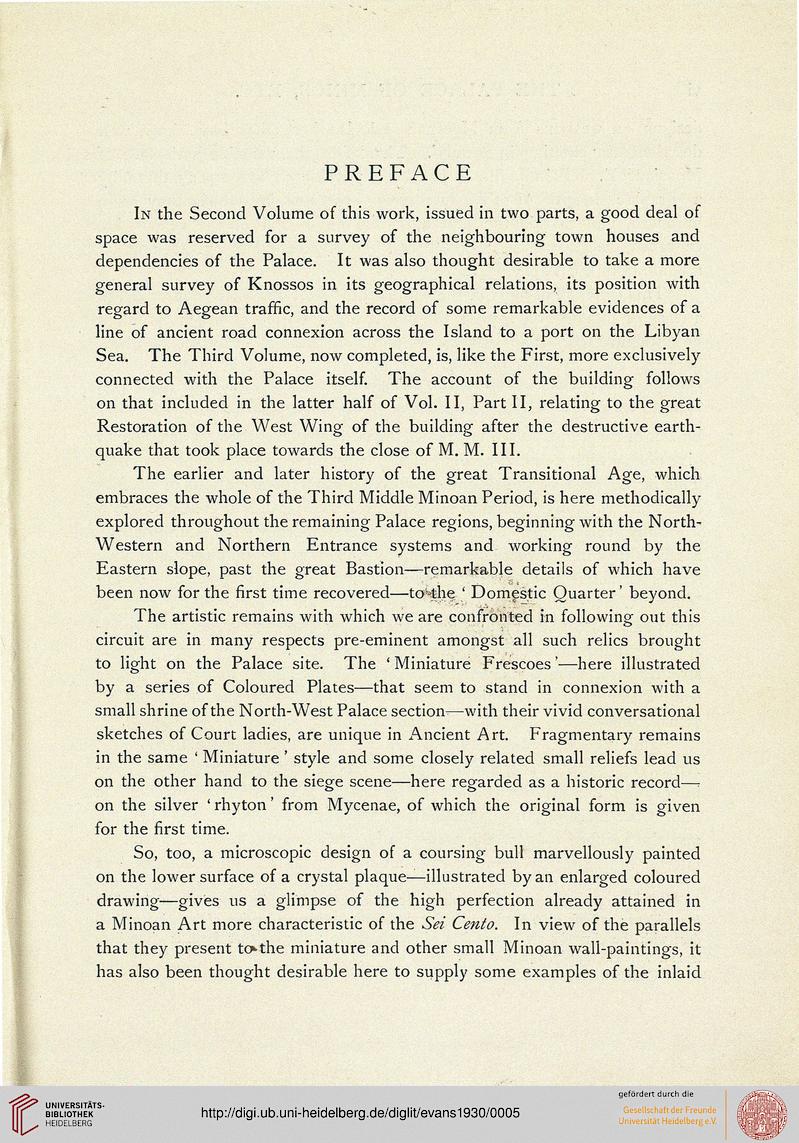 In the Second Volume of this work, issued in two parts, a good deal of
space was reserved for a survey of the neighbouring town houses and
dependencies of the Palace. It was also thought desirable to take a more
general survey of Knossos in its geographical relations, its position with
regard to Aegean traffic, and the record of some remarkable evidences of a
line of ancient road connexion across the Island to a port on the Libyan
Sea. The Third Volume, now completed, is, like the First, more exclusively
connected with the Palace itself. The account of the building follows
on that included in the latter half of Vol. II, Part II, relating to the great
Restoration of the West Wing of the building after the destructive earth-
quake that took place towards the close of M. M. III.

The earlier and later history of the great Transitional Age, which
embraces the whole of the Third Middle Minoan Period, is here methodically
explored throughout the remaining Palace regions, beginning with the North-
Western and Northern Entrance systems and working round by the
Eastern slope, past the great Bastion—remarkable details of which have
been now for the first time recovered—toMthe ' Domestic Quarter' beyond.

The artistic remains with which we are confronted in following out this
circuit are in many respects pre-eminent amongst all such relics brought
to light on the Palace site. The ' Miniature Frescoes'—here illustrated
by a series of Coloured Plates—that seem to stand in connexion with a
small shrine of the North-West Palace section—with their vivid conversational
sketches of Court ladies, are unique in Ancient Art. Fragmentary remains
in the same ' Miniature ' style and some closely related small reliefs lead us
on the other hand to the siege scene—here regarded as a historic record—;
on the silver ' rhyton' from Mycenae, of which the original form is given
for the first time.

So, too, a microscopic design of a coursing bull marvellously painted
on the lower surface of a crystal plaque—illustrated by an enlarged coloured
drawing—gives us a glimpse of the high perfection already attained in
a Minoan Art more characteristic of the Sei Cento. In view of the parallels
that they present to*the miniature and other small Minoan wall-paintings, it
has also been thought desirable here to supply some examples of the inlaid