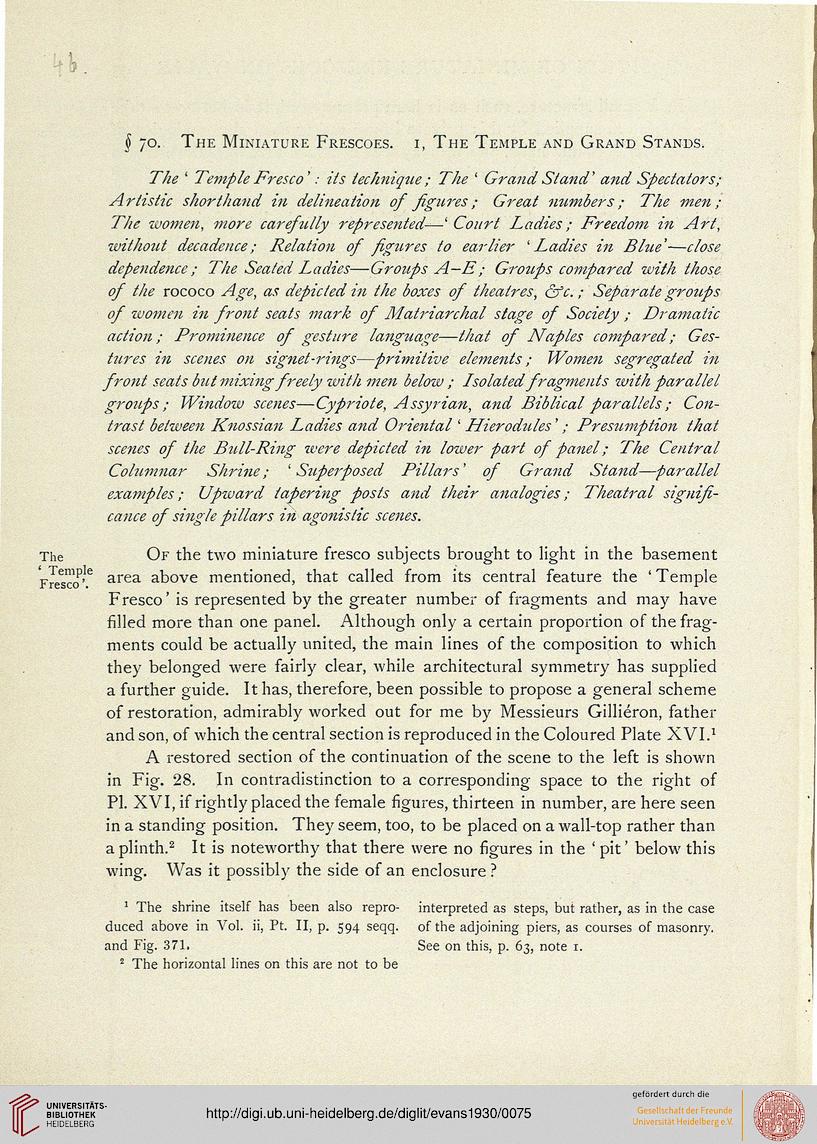 Information about OCR text
§ jo. The Miniature Frescoes, i, The Temple and Grand Stands.

The ' Temple Fresco': its technique ; The ' Grand Stand' and Spectators;
Artistic shorthand in delineation of figures; Great numbers; The men;
The women, more carefully represented—1 Court Ladies; Freedom in Art,
without decadence; Relation of figures to earlier 'Ladies in Blue'-—close
dependence ; The Seated Ladies—Groups A—E; Groups compared with those
of the rococo Age, as depicted in the boxes of theatres, &c.; Separate groitps
of women in front seats mark of Matriarchal stage of Society ; Dramatic
action; Prominence of gesture language—that of Naples compared; Ges-
tures in scenes on signet-rings—primitive elements; Women segregated in
front seats but mixing freely with men below ; Isolated fragments with parallel
groups; Window scenes—Cypriote, Assyrian, and Biblical parallels; Con-
trast between Knossian Ladies and Oriental' Hierodules'; Presumption that
scenes of the Bull-Ring were depicted in lower part of panel; The Central
Columnar Shrine; ' Superposed Pillars' of Grand Stand—parallel
examples; Upward tapering posts and their analogies; Theatral signifi-
cance of single pillars in agonistic scenes.

Fresco'6 area at>ove mentioned, that called from its central feature the ' Temple
Fresco' is represented by the greater number of fragments and may have
filled more than one panel. Although only a certain proportion of the frag-
ments could be actually united, the main lines of the composition to which
they belonged were fairly clear, while architectural symmetry has supplied
a further guide. It has, therefore, been possible to propose a general scheme
of restoration, admirably worked out for me by Messieurs Gillieron, father
and son, of which the central section is reproduced in the Coloured Plate XVI.1
A restored section of the continuation of the scene to the left is shown
in Fig. 28. In contradistinction to a corresponding space to the right of
PI. XVI, if rightly placed the female figures, thirteen in number, are here seen
in a standing position. They seem, too, to be placed on a wall-top rather than
a plinth.2 It is noteworthy that there were no figures in the ' pit' below this
wing. Was it possibly the side of an enclosure ?

1 The shrine itself has been also repro- interpreted as steps, but rather, as in the case

2 The horizontal lines on this are not to be