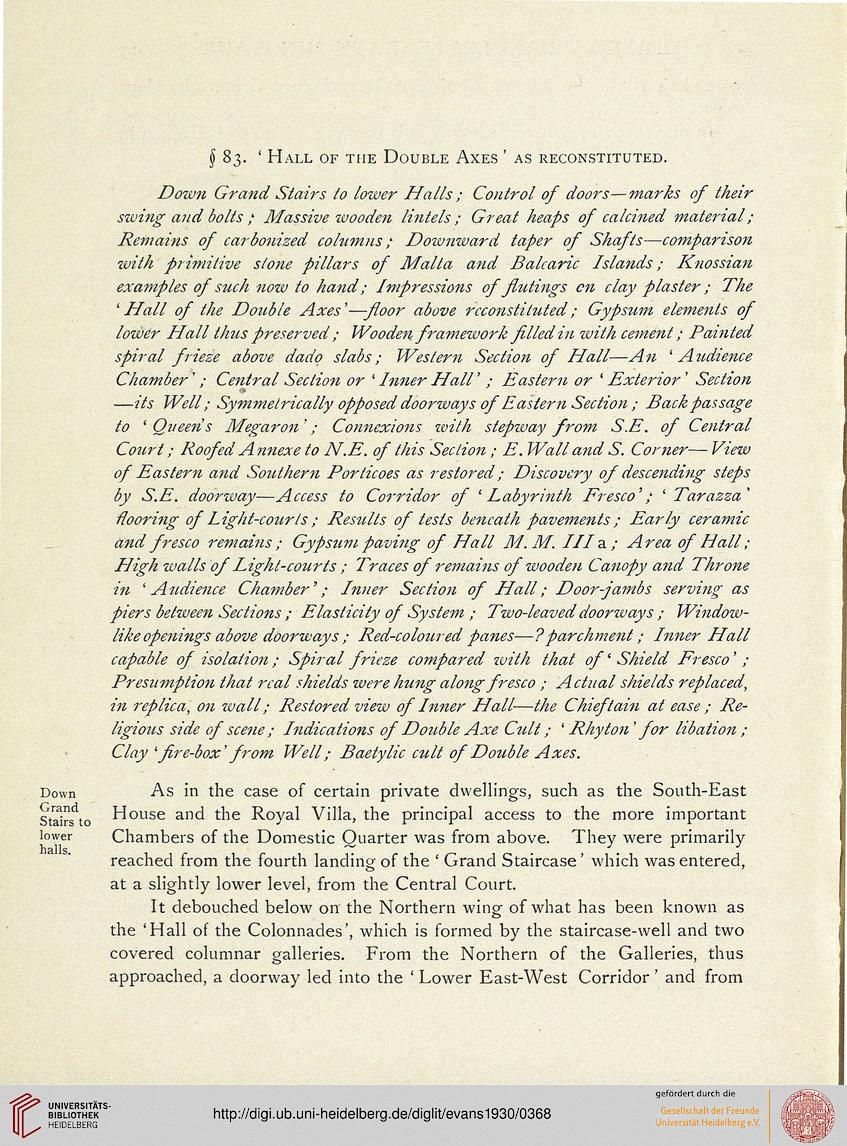 Information about OCR text
§ 83- ' Hall of the Double Axes ' as reconstituted.

Down Grand Stairs to lower Halls ; Control of doors—marks of their
swing and bolts; Massive wooden lintels; Great heaps of calcined material;
Remains of carbonized cohimns; Doivnward taper of Shafts—comparison
with primitive stone pillars of Malta and Balearic Islands; Knossian
examples of such now to hand; Impressions of flutings en clay plaster ; The
'Hall of the Dottble Axes'—floor above reconstituted; Gypsum elements of
lower Hall tints preserved ; Wooden framework filled in with cement; Painted
spiral frieze above dado slabs; Western Section of Hall—An 'Audience
Chamber'; Central Section or ' Inner Hall' ; Eastern or ' Exterior' Section
—its Well; Symmetrically opposed doorways of Eastern Section ; Back passage
to ' Queens Megaron'; Connexions zvith stepway from SE. of Central
Court; Roofed A nnexe to N.E. of this Section ; E. Wall and S. Corner— View
of Eastern and Southern Porticoes as restored; Discovery of descending steps
by S.E. doorway—Access to Corridor of 'Labyrinth Fresco'; ' Tarazza'
flooring of Light-courts ; Results of tests beneath pavements ; Early ceramic
and fresco remains ; Gypsum paving of Hall M.M. Illa; Area of Hall;
High walls of Light-courts ; Traces of remains of wooden Canopy and Throne
in 'Audience Chamber'; Inner Section of Hall; Door-jambs serving as
piers between Sections ; Elasticity of System ; Two-leaved doorways ; Window-
like openings above doorways ; Red-coloured panes—?parchment; Inner Hall
capable of isolation ; Spiral frieze compared with that of' Shield Fresco' ;
Presumption that real shields were hung along fresco ; Actual shields replaced,
in replica, on wall; Restored view of Inner Hall—the Chieftain at ease ; Re-
ligious side of scene ; Indications of Double Axe Cult; ' Rhyton' for libation ;
Clay ' fire-box' from Well; Baetylic cult of Double Axes.

Down As in the case of certain private dwellings, such as the South-East

Stairs to House and the Royal Villa, the principal access to the more important

lower Chambers of the Domestic Quarter was from above. They were primarily

reached from the fourth landing of the ' Grand Staircase' which was entered,

at a slightly lower level, from the Central Court.

It debouched below on the Northern wing- of what has been known as
the 'Hall of the Colonnades', which is formed by the staircase-well and two
covered columnar galleries. From the Northern of the Galleries, thus
approached, a doorway led into the ' Lower East-West Corridor' and from