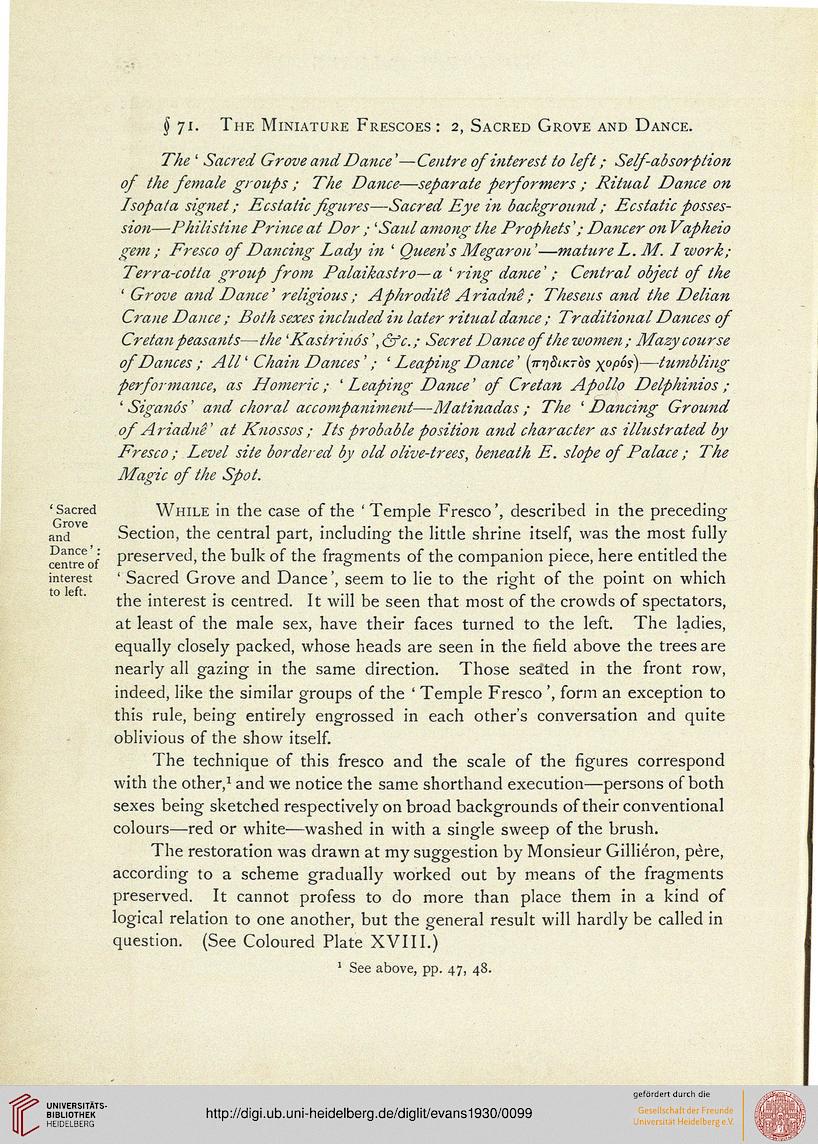 The ' Sacred Grove and Dance'—Centre of interest to left; Self-absorption
of the female groups ; The Dance—separate performers ; Ritual Dance on
Isopata signet; Ecstatic figures—Sacred Eye in background; Ecstatic posses-
sion—Philistine Prince at Dor ; 'Saul among the Prophets'; Dancer on Vapheio
gem; Fresco of Dancing Lady in ' Queens Megarou'—mature L. M. I work;
Terra-cotta group from Palaikastro—a ' ring dance' ; Central object of the
' Grove and Dance' religious; AphroditS Ariadni; Theseus and the Delian
Crane Dance ; Both sexes included in later ritu,al dance ; Traditional Dances of
Cretan peasants—the 'Kastrinds'' ,&c; Secret Dance of the women ; Mazy course
of Dances ; All' Chain Dances '; ' Leaping Dance' (irrjSiKTos x°P°s)—tumbling
performance, as Homeric; 'Leaping Dance' of Cretan Apollo Delphinios;
' Sigands' and choral accompaniment—Matinadas ; The ' Dancing Ground
of Ariadni' at Knossos; Its probable position and character as illustrated by
Fresco ; Level site bordered by old olive-trees, beneath E. slope of Palace ; The
Magic of the Spot.

■ Sacred While in the case of the ' Temple Fresco', described in the preceding

Section, the central part, including the little shrine itself, was the most fully
preserved, the bulk of the fragments of the companion piece, here entitled the

interest ' Sacred Grove and Dance', seem to lie to the right of the point on which
the interest is centred. It will be seen that most of the crowds of spectators,
at least of the male sex, have their faces turned to the left. The ladies,
equally closely packed, whose heads are seen in the field above the trees are
nearly all gazing in the same direction. Those seated in the front row,
indeed, like the similar groups of the ' Temple Fresco ', form an exception to
this rule, being entirely engrossed in each other's conversation and quite
oblivious of the show itself.

The technique of this fresco and the scale of the figures correspond
with the other,1 and we notice the same shorthand execution—persons of both
sexes being sketched respectively on broad backgrounds of their conventional
colours—red or white—washed in with a single sweep of the brush.

The restoration was drawn at my suggestion by Monsieur Gillieron, peYe,
according to a scheme gradually worked out by means of the fragments
preserved. It cannot profess to do more than place them in a kind of
logical relation to one another, but the general result will hardly be called in
question. (See Coloured Plate XVIII.)