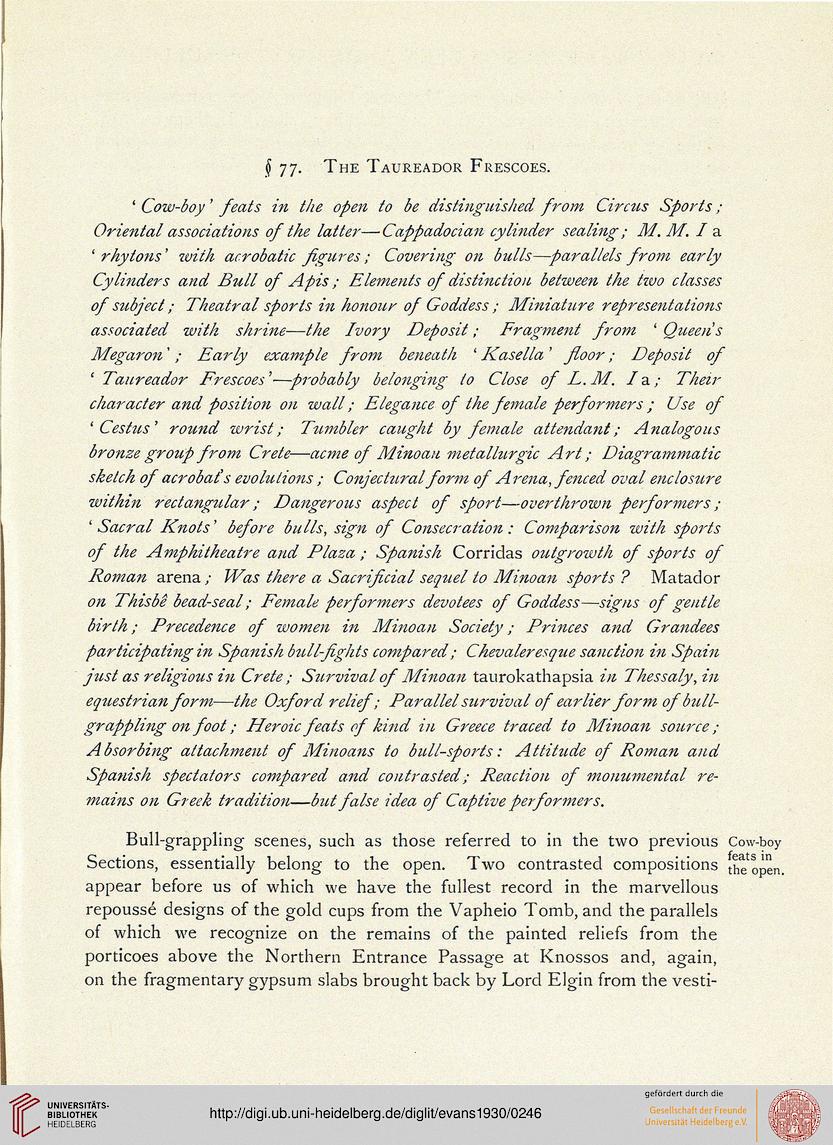 ' Cow-boy' feats in the open to be distinguished from Circus Sports ;
Oriental associations of the latter—Cappadocian cylinder sealing; M.M. la
' rhy'tons' with acrobatic figures ; Covering on bulls—parallels from early
Cylinders and Bull of Apis; Elements of distinction between the tzvo classes
of stibject; Theatral sports in honour of Goddess ; Miniature representations
associated with shrine—the Ivory Deposit; Fragment from ' Queen's
Megaron'; Early example from beneath ' Kasella' floor; Deposit of
'Taureador Frescoes'-—probably belonging to Close of L.M. la; Their
character and position on wall; Elegance of the female performers ; Use of
' Ceslus' round wrist; Tiimbler caught by female attendant; Analogous
bronze group from Crete—acme of Minoau metallurgic Art; Diagrammatic
sketch of acrobat's evolutions ; Conjechiral form of Arena, fenced oval enclosure
within rectangitlar ; Dangerous aspect of sport—overthrown performers;
' Sacral Knots' before bulls, sign of Consecration: Comparison with sports
of the Amphitheatre and Plaza ; Spanish Corridas outgrowth of sports of
Roman arena / Was there a Sacrificial sequel to Minoan sports ? Matador
on Thisbi bead-seal; Female performers devotees of Goddess—signs of gentle
birth; Precedence of women in Minoan Society; Princes and Grandees
participating in Spanish bull-fights compared; Chevaleresque sanction in Spain
just as religious in Crete ; Survival of Minoan taurokathapsia in Thessaly, in
equestrian form—the Oxford relief; Parallel survival of earlier form of hell-
grappling on foot; Heroic feats of kind in Greece traced to Minoan source;
Absorbing attachment of Minoans to bull-sports: Attitude of Roman and
Spanish spectators compared and contrasted; Reaction of monumental re-
mains on Greek tradition—but false idea of Captive performers.

Bull-grappling scenes, such as those referred to in the two previous Cow-boy
Sections, essentially belong to the open. Two contrasted compositions ti,e ™n_
appear before us of which we have the fullest record in the marvellous
repousse designs of the gold cups from the Vapheio Tomb, and the parallels
of which we recognize on the remains of the painted reliefs from the
porticoes above the Northern Entrance Passage at Knossos and, again,
on the fragmentary gypsum slabs brought back by Lord Elgin from the vesti-