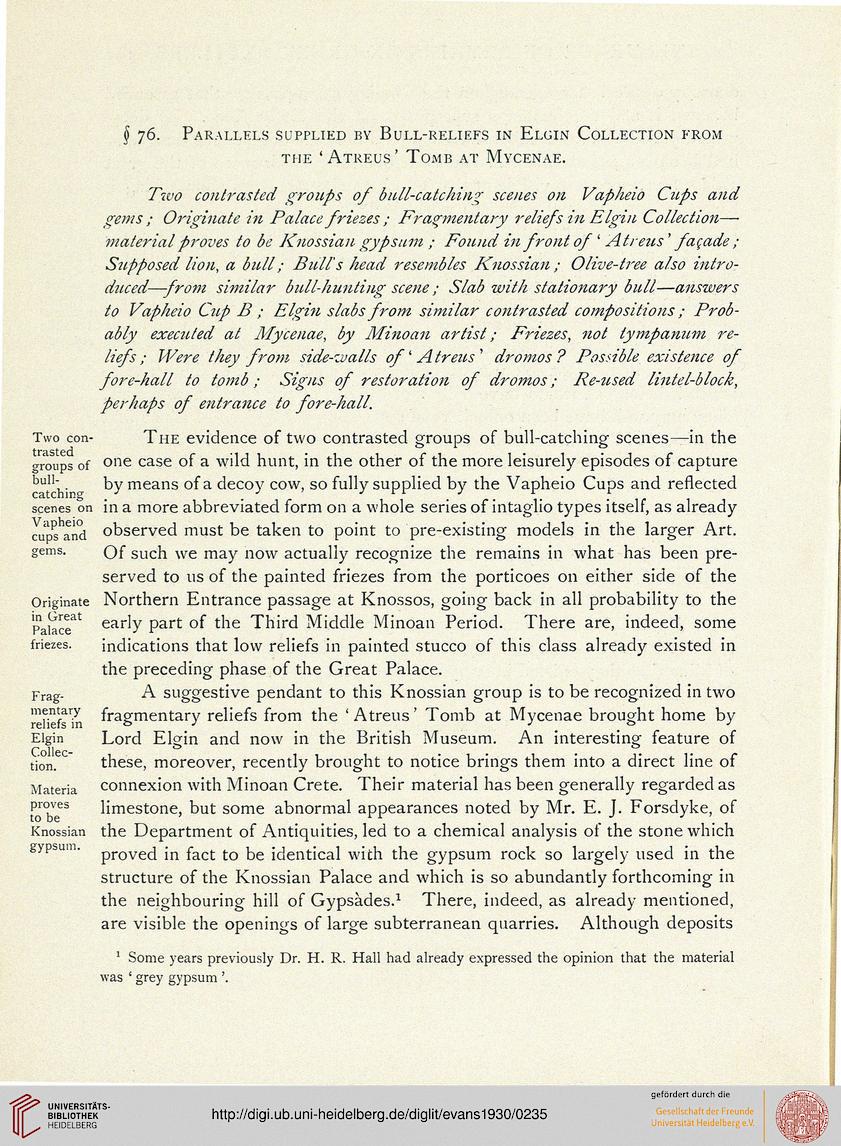 Information about OCR text
76. Parallels supplied by Bull-reliefs in Elgin Collection from
the ' Atreus' Tomb at Mycenae.

Materia
proves
to be
Knossian
gypsum.

fore-hall to tomb; Signs of restoration of dromos; Revised lintel-block,

perhaps of entrance to fore-hall.

The evidence of two contrasted groups of bull-catching scenes—in the
one case of a wild hunt, in the other of the more leisurely episodes of capture
by means of a decoy cow, so fully supplied by the Vapheio Cups and reflected
in a more abbreviated form on a whole series of intaglio types itself, as already
observed must be taken to point to pre-existing models in the larger Art.
Of such we may now actually recognize the remains in what has been pre-
served to us of the painted friezes from the porticoes on either side of the
Northern Entrance passage at Knossos, going back in all probability to the
early part of the Third Middle Minoan Period. There are, indeed, some
indications that low reliefs in painted stucco of this class already existed in
the preceding phase of the Great Palace.

A suggestive pendant to this Knossian group is to be recognized in two
fragmentary reliefs from the ' Atreus' Tomb at Mycenae brought home by
Lord Elgin and now in the British Museum. An interesting feature of
these, moreover, recently brought to notice brings them into a direct line of
connexion with Minoan Crete. Their material has been generally regarded as
limestone, but some abnormal appearances noted by Mr. E. J. Forsdyke, of
the Department of Antiquities, led to a chemical analysis of the stone which
proved in fact to be identical with the gypsum rock so largely used in the
structure of the Knossian Palace and which is so abundantly forthcoming in
the neighbouring hill of Gypsades.1 There, indeed, as already mentioned,
are visible the openings of large subterranean quarries. Although deposits

1 Some years previously Dr. H. R. Hall had already expressed the opinion that the material
was ' grey gypsum '.