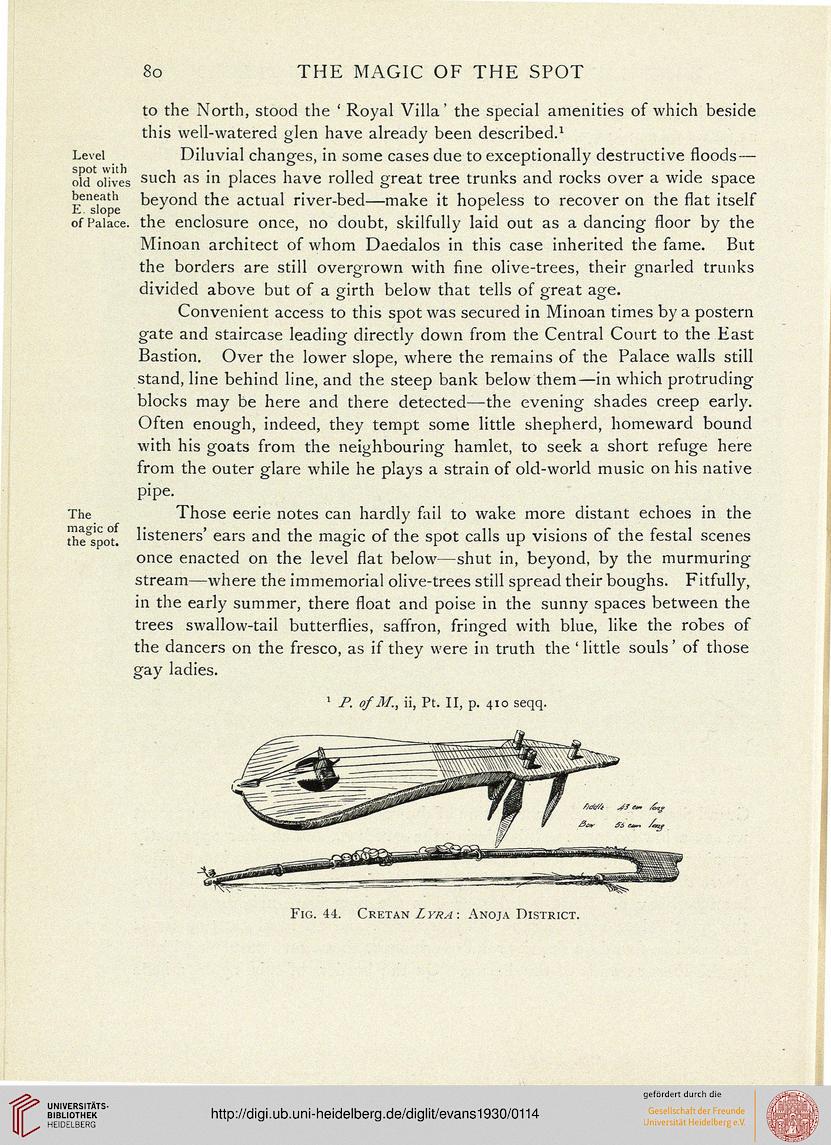 THE MAGIC OF THE SPOT

Level
spot with
old olives
beneath
E. slope
of Palace.

magic of
the spot.

to the North, stood the ' Royal Villa' the special amenities of which beside
this well-watered glen have already been described.1

Diluvial changes, in some cases due to exceptionally destructive floods—
such as in places have rolled great tree trunks and rocks over a wide space
beyond the actual river-bed—make it hopeless to recover on the flat itself
the enclosure once, no doubt, skilfully laid out as a dancing floor by the
Minoan architect of whom Daedalos in this case inherited the fame. But
the borders are still overgrown with fine olive-trees, their gnarled trunks
divided above but of a girth below that tells of great age.

Convenient access to this spot was secured in Minoan times by a postern
gate and staircase leading directly down from the Central Court to the East
Bastion. Over the lower slope, where the remains of the Palace walls still
stand, line behind line, and the steep bank below them—in which protruding
blocks may be here and there detected—the evening shades creep early.
Often enough, indeed, they tempt some little shepherd, homeward bound
with his goats from the neighbouring hamlet, to seek a short refuge here
from the outer glare while he plays a strain of old-world music on his native
pipe.

Those eerie notes can hardly fail to wake more distant echoes in the
listeners' ears and the magic of the spot calls up visions of the festal scenes
once enacted on the level flat below—shut in, beyond, by the murmuring
stream—where the immemorial olive-trees still spread their boughs. Fitfully,
in the early summer, there float and poise in the sunny spaces between the
trees swallow-tail butterflies, saffron, frineed with blue, like the robes of
the dancers on the fresco, as if they were in truth the ' little souls' of those
gay ladies.