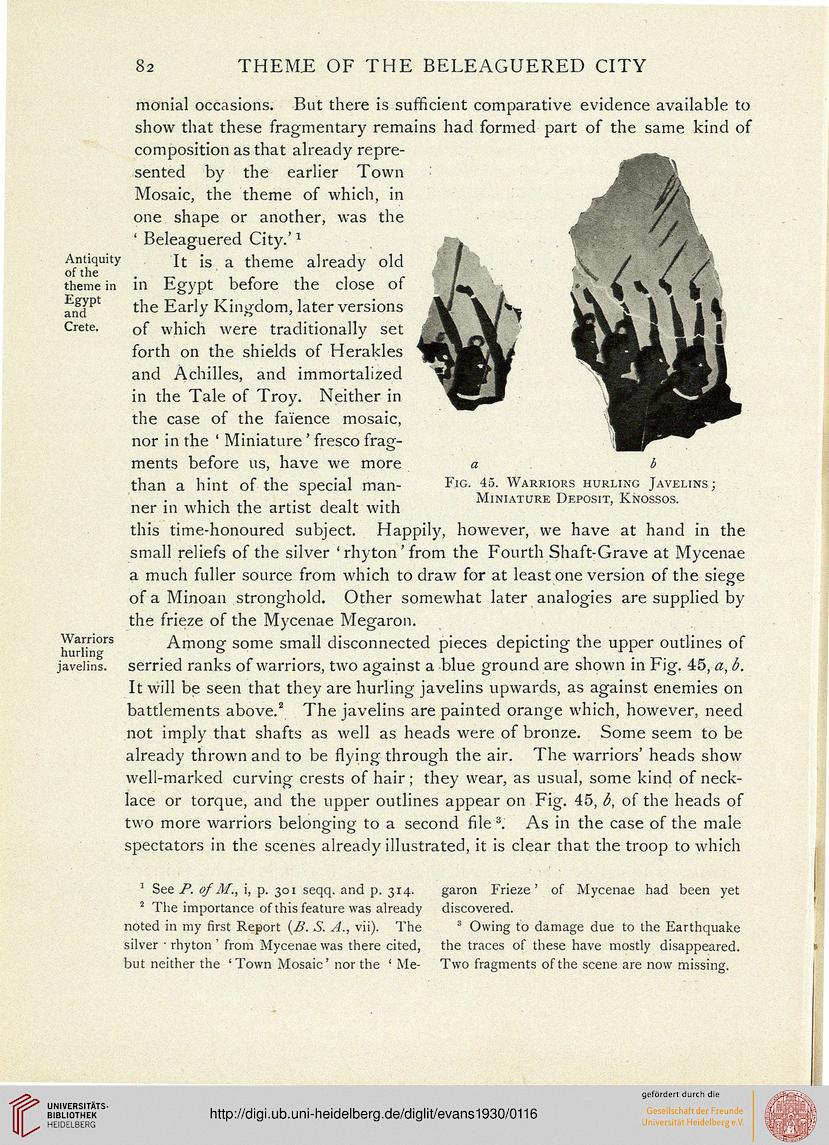 THEME OF THE BELEAGUERED CITY

Antiquity
of the
theme in
Egypt
and
Crete.

monial occasions. But there is sufficient comparative evidence available to
show that these fragmentary remains had formed part of the same kind of
composition as that already repre-
sented by the earlier Town
Mosaic, the theme of which, in
one shape or another, was the
' Beleaguered City.'1

It is a theme already old
in Egypt before the close of
the Early Kingdom, later versions
of which were traditionally set
forth on the shields of Herakles
and Achilles, and immortalized
in the Tale of Troy. Neither in
the case of the faience mosaic,
nor in the ' Miniature ' fresco frag-
ments before us, have we more
than a hint of the special man-
ner in which the artist dealt with
this time-honoured subject. Happily, however, we have at hand in the
small reliefs of the silver 'rhyton'from the Fourth Shaft-Grave at Mycenae
a much fuller source from which to draw for at least one version of the siege
of a Minoan stronghold. Other somewhat later analogies are supplied by
the frieze of the Mycenae Megarpn.

Among some small disconnected pieces depicting the upper outlines of
serried ranks of warriors, two against a blue ground are shown in Fig. 45, a, b.
It will be seen that they are hurling javelins upwards, as against enemies on
battlements above.2 The javelins are painted orange which, however, need
not imply that shafts as well as heads were of bronze. Some seem to be
already thrown and to be flying through the air. The warriors' heads show
well-marked curving crests of hair ; they wear, as usual, some kind of neck-
lace or torque, and the upper outlines appear on Fig. 45, b, of the heads of
two more warriors belonging to a second file 3. As in the case of the male
spectators in the scenes already illustrated, it is clear that the troop to which

2 The importance of this feature was already
noted in my first Report {B. S. A., vii). The
silver ■■ rhyton ' from Mycenae was there cited,

garon Frieze' of Mycenae had been yet
discovered.

s Owing to damage due to the Earthquake
the traces of these have mostly disappeared.

but neither the 'Town Mosaic' nor the ' Me- Two fragments of the scene are now missing.