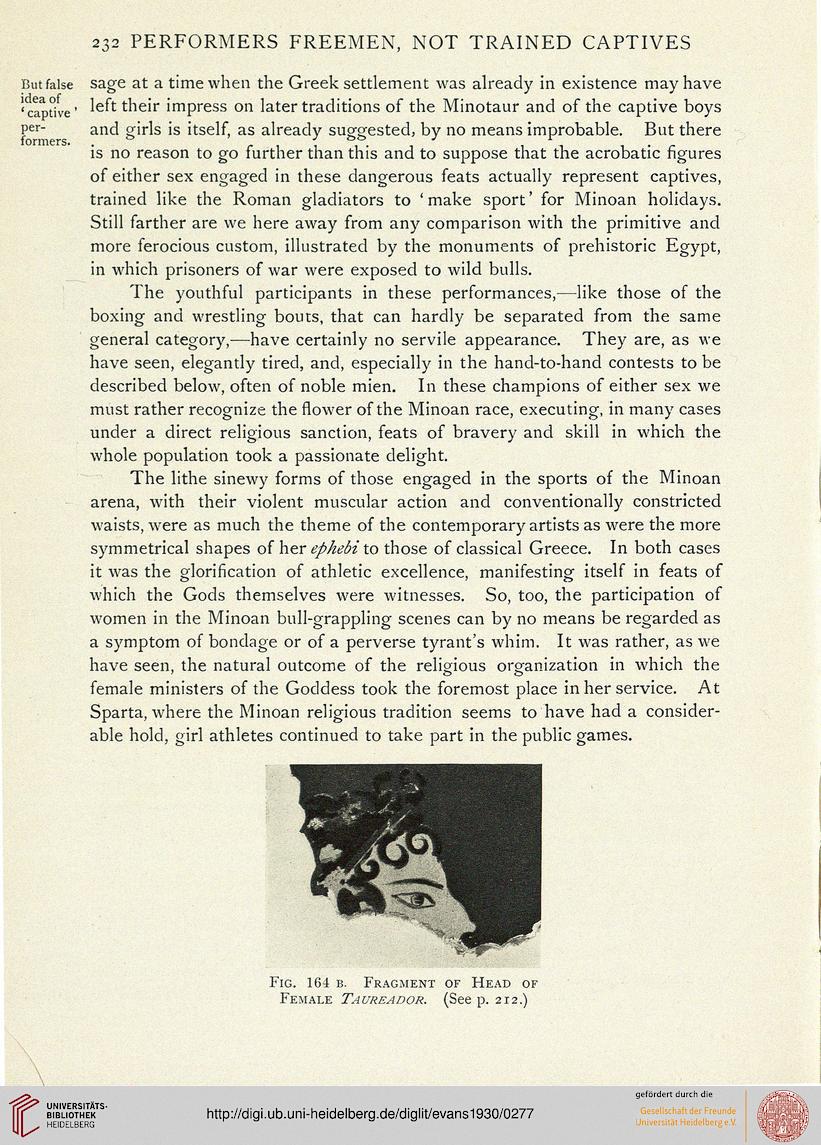 But false sage at a time when the Greek settlement was already in existence may have
'captive' 'e^ t^e'r impress on later traditions of the Minotaur and of the captive boys
Per- and girls is itself, as already suggested, by no means improbable. But there

is no reason to go iurther than this and to suppose that the acrobatic figures
of either sex engaged in these dangerous feats actually represent captives,
trained like the Roman gladiators to ' make sport' for Minoan holidays.
Still farther are we here away from any comparison with the primitive and
more ferocious custom, illustrated by the monuments of prehistoric Egypt,
in which prisoners of war were exposed to wild bulls.

The youthful participants in these performances,—like those of the
boxing and wrestling bouts, that can hardly be separated from the same
general category,—have certainly no servile appearance. They are, as we
have seen, elegantly tired, and, especially in the hand-to-hand contests to be
described below, often of noble mien. In these champions of either sex we
must rather recognize the flower of the Minoan race, executing, in many cases
under a direct religious sanction, feats of bravery and skill in which the
whole population took a passionate delight.

The lithe sinewy forms of those engaged in the sports of the Minoan
arena, with their violent muscular action and conventionally constricted
waists, were as much the theme of the contemporary artists as were the more
symmetrical shapes of her ephebi to those of classical Greece. In both cases
it was the glorification of athletic excellence, manifesting itself in feats of
which the Gods themselves were witnesses. So, too, the participation of
women in the Minoan bull-grappling scenes can by no means be regarded as
a symptom of bondage or of a perverse tyrant's whim. It was rather, as we
have seen, the natural outcome of the religious organization in which the
female ministers of the Goddess took the foremost place in her service. At
Sparta, where the Minoan religious tradition seems to have had a consider-
able hold, girl athletes continued to take part in the public games.