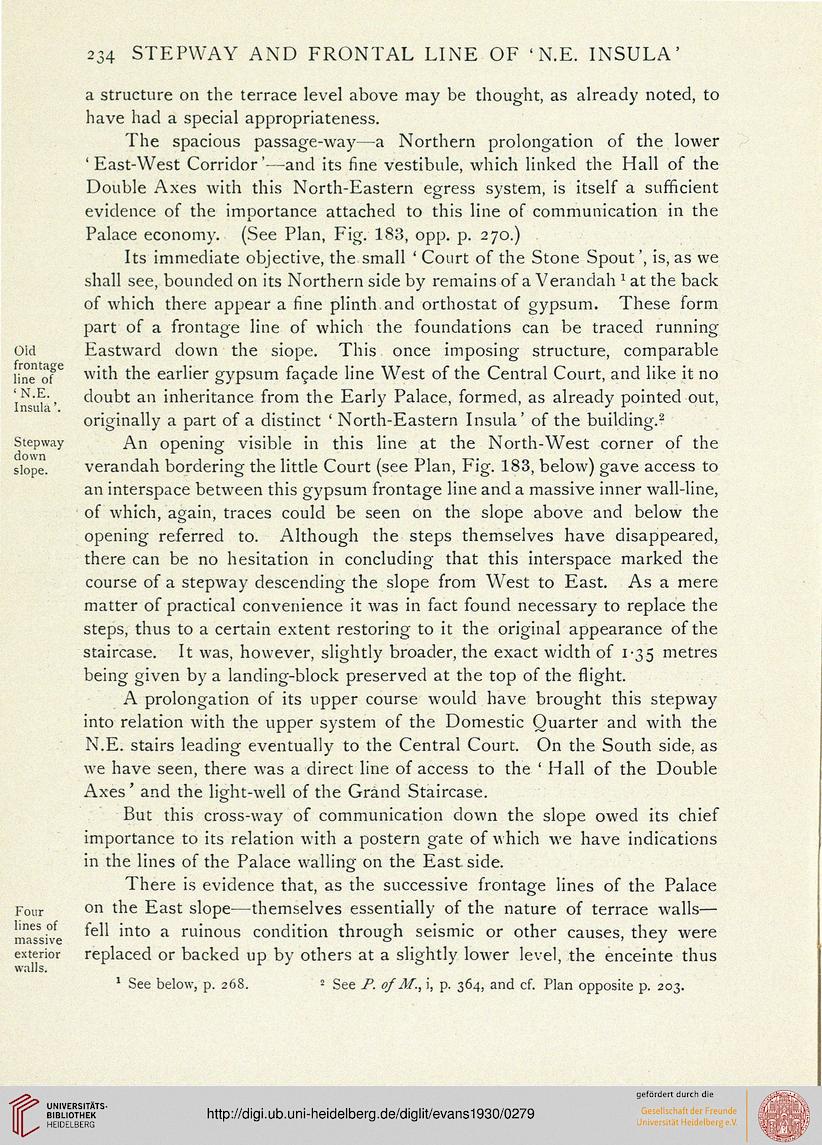 a structure on the terrace level above may be thought, as already noted, to
have had a special appropriateness.

The spacious passage-way—a Northern prolongation of the lower
' East-West Corridor'—and its fine vestibule, which linked the Hall of the
Double Axes with this North-Eastern egress system, is itself a sufficient
evidence of the importance attached to this line of communication in the
Palace economy. (See Plan, Fig. 183, opp. p. 270.)

Its immediate objective, the small ' Court of the Stone Spout', is, as we
shall see, bounded on its Northern side by remains of a Verandah x at the back
of which there appear a fine plinth and orthostat of gypsum. These form
part of a frontage line of which the foundations can be traced running
Eastward down the siope. This - once imposing structure, comparable
with the earlier gypsum facade line West of the Central Court, and like it no
doubt an inheritance from the Early Palace, formed, as already pointed out,
originally a part of a distinct ' North-Eastern Insula' of the building.2

An opening visible in this line at the North-West corner of the
verandah bordering the little Court (see Plan, Fig. 183, below) gave access to
an interspace between this gypsum frontage line and a massive inner wall-line,
of which, again, traces could be seen on the slope above and below the
opening referred to. Although the steps themselves have disappeared,
there can be no hesitation in concluding that this interspace marked the
course of a stepway descending the slope from West to East. As a mere
matter of practical convenience it was in fact found necessary to replace the
steps, thus to a certain extent restoring to it the original appearance of the
staircase. It was, however, slightly broader, the exact width of 1-35 metres
being given by a landing-block preserved at the top of the flight.

A prolongation of its upper course would have brought this stepway
into relation with the upper system of the Domestic Quarter and with the
N.E. stairs leading eventually to the Central Court. On the South side, as
we have seen, there was a direct line of access to the ' Hall of the Double
Axes' and the light-well of the Grand Staircase.

But this cross-way of communication down the slope owed its chief
importance to its relation with a postern gate of which we have indications
in the lines of the Palace walling on the East side.

There is evidence that, as the successive frontage lines of the Palace

fell into a ruinous condition through seismic or other causes, they were

replaced or backed up by others at a slightly lower level, the enceinte thus