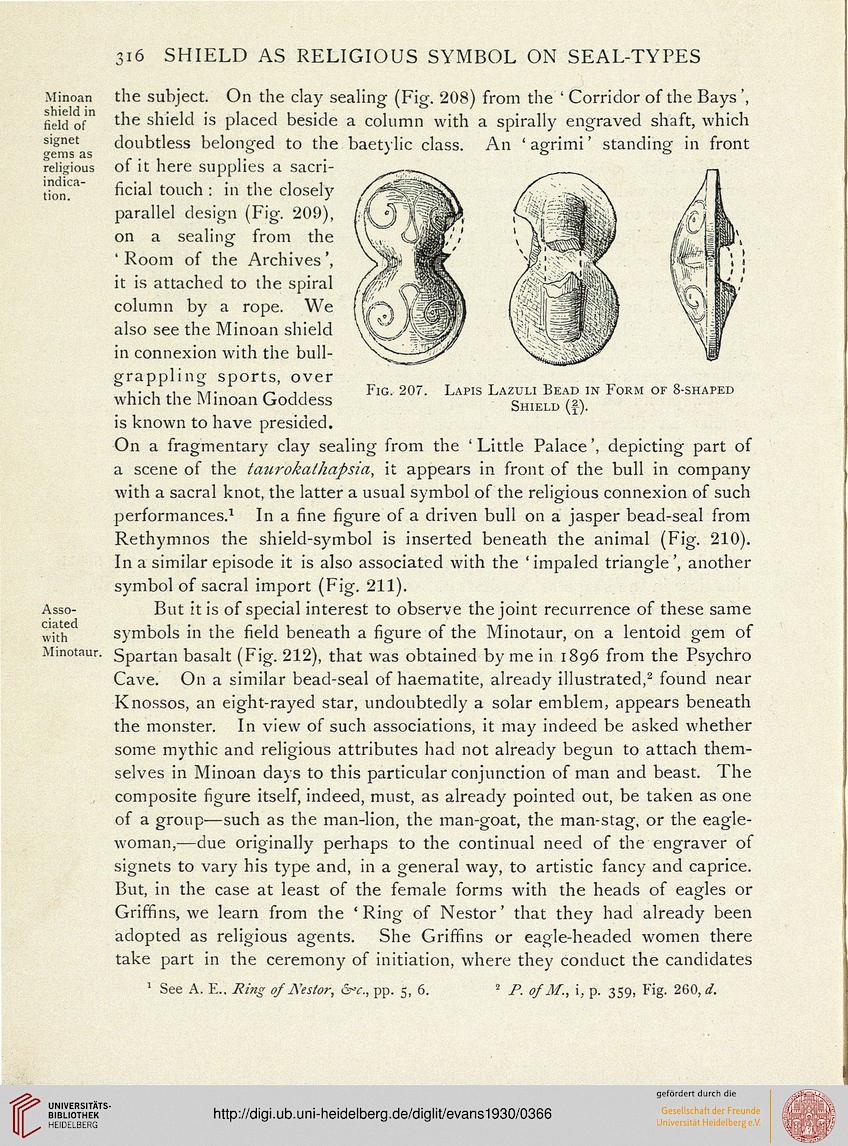 Information about OCR text
3i6

SHIELD AS RELIGIOUS SYMBOL ON SEAL-TYPES

the subject. On the clay sealing (Fig. 208) from the ' Corridor of the Bays',
the shield is placed beside a column with a spirally engraved shaft, which
doubtless belonged to the baetylic class. An ' agrimi' standing in front
of it here supplies a sacri-
ficial touch : in the closely
parallel design (Fig. 209),
on a sealing from the
' Room of the Archives',
it is attached to the spiral
column by a rope. We
also see the Minoan shield
in connexion with the bull-
grappling sports, over
which the Minoan Goddess
is known to have presided.
On a fragmentary clay sealing from the 'Little Palace', depicting part of
a scene of the taurokathapsia, it appears in front of the bull in company
with a sacral knot, the latter a usual symbol of the religious connexion of such
performances.1 In a fine figure of a driven bull on a jasper bead-seal from
Rethymnos the shield-symbol is inserted beneath the animal (Fig. 210).
In a similar episode it is also associated with the ' impaled triangle', another
symbol of sacral import (Fig. 211).

But it is of special interest to observe the joint recurrence of these same
symbols in the field beneath a figure of the Minotaur, on a lentoid gem of
Spartan basalt (Fig. 212), that was obtained by me in 1896 from the Psychro
Cave. On a similar bead-seal of haematite, already illustrated,2 found near
Knossos, an eight-rayed star, undoubtedly a solar emblem, appears beneath
the monster. In view of such associations, it may indeed be asked whether
some mythic and religious attributes had not already begun to attach them-
selves in Minoan days to this particular conjunction of man and beast. The
composite figure itself, indeed, must, as already pointed out, be taken as one
of a group-—such as the man-lion, the man-goat, the man-stag, or the eagle-
woman,—due originally perhaps to the continual need of the engraver of
signets to vary his type and, in a general way, to artistic fancy and caprice.
But, in the case at least of the female forms with the heads of eagles or
Griffins, we learn from the 'Ring of Nestor' that they had already been
adopted as religious agents. She Griffins or eagle-headed women there
take part in the ceremony of initiation, where they conduct the candidates