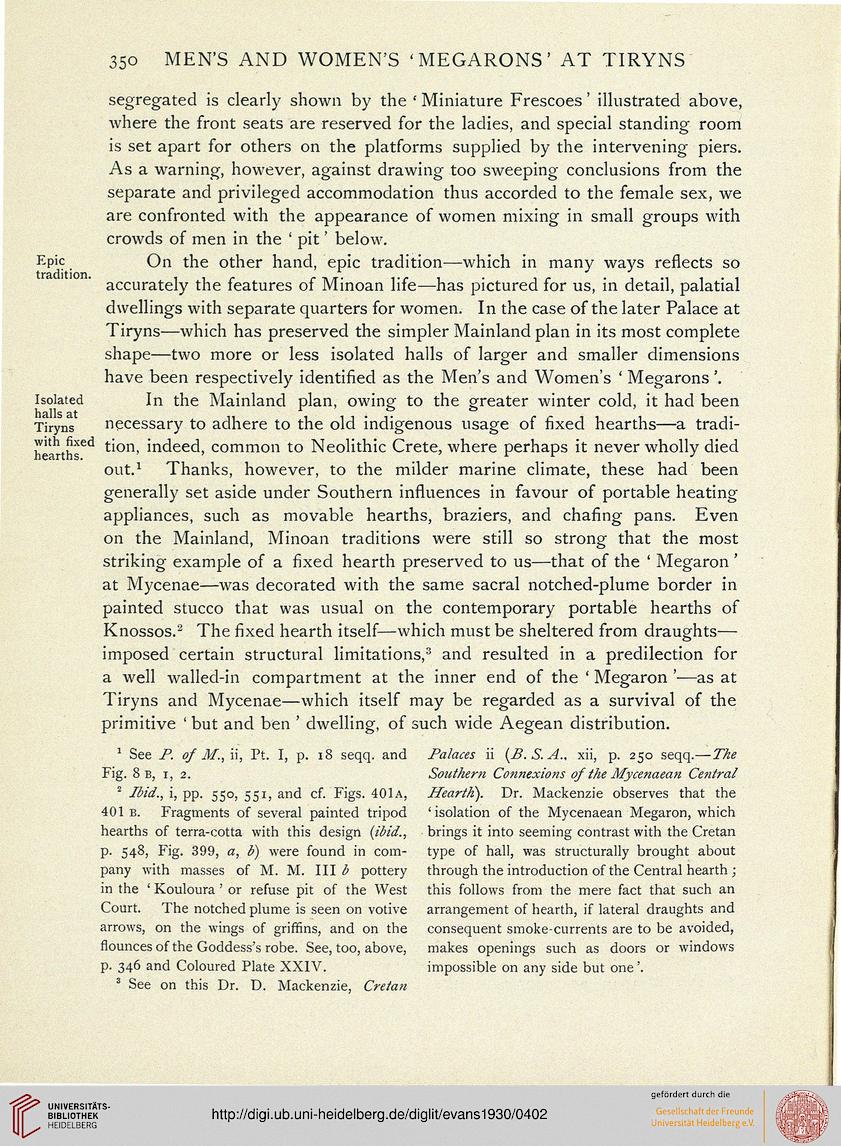 segregated is clearly shown by the ' Miniature Frescoes' illustrated above,
where the front seats are reserved for the ladies, and special standing room
is set apart for others on the platforms supplied by the intervening piers.
As a warning, however, against drawing too sweeping conclusions from the
separate and privileged accommodation thus accorded to the female sex, we
are confronted with the appearance of women mixing in small groups with
crowds of men in the ' pit' below.

On the other hand, epic tradition—which in many ways reflects so
accurately the features of Minoan life—has pictured for us, in detail, palatial
dwellings with separate quarters for women. In the case of the later Palace at
Tiryns—which has preserved the simpler Mainland plan in its most complete
shape—two more or less isolated halls of larger and smaller dimensions
have been respectively identified as the Men's and Women's ' Megarons '.

In the Mainland plan, owing to the greater winter cold, it had been
necessary to adhere to the old indigenous usage of fixed hearths—a tradi-
tion, indeed, common to Neolithic Crete, where perhaps it never wholly died
out.1 Thanks, however, to the milder marine climate, these had been
generally set aside under Southern influences in favour of portable heating
appliances, such as movable hearths, braziers, and chafing pans. Even
on the Mainland, Minoan traditions were still so strong that the most
striking example of a fixed hearth preserved to us—that of the ' Megaron'
at Mycenae—was decorated with the same sacral notched-plume border in
painted stucco that was usual on the contemporary portable hearths of
Knossos.2 The fixed hearth itself—which must be sheltered from draughts—
imposed certain structural limitations,3 and resulted in a predilection for
a well walled-in compartment at the inner end of the ' Megaron '—as at
Tiryns and Mycenae—which itself may be regarded as a survival of the
primitive ' but and ben ' dwelling, of such wide Aegean distribution.

Palaces ii (U.S.A., xii, p. 250 seqq.—The
Southern Connexions of the Mycenaean Central
HeartK). Dr. Mackenzie observes that the
' isolation of the Mycenaean Megaron, which
brings it into seeming contrast with the Cretan
type of hall, was structurally brought about
through the introduction of the Central hearth ;
this follows from the mere fact that such an
arrangement of hearth, if lateral draughts and
consequent smoke-currents are to be avoided,
makes openings such as doors or windows
impossible on any side but one'.