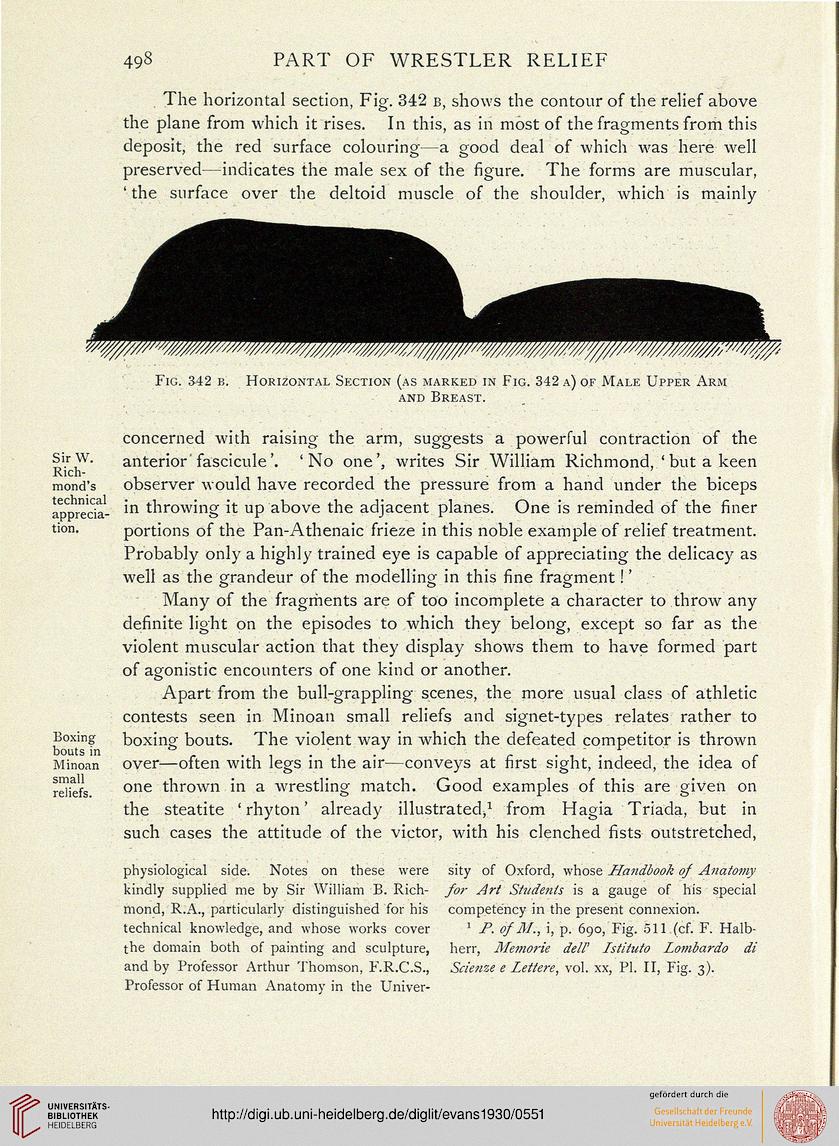 The horizontal section, Fig. 342 b, shows the contour of the relief above
the plane from which it rises. In this, as in most of the fragments from this
deposit, the red surface colouring—a good deal of which was here well
preserved—indicates the male sex of the figure. The forms are muscular,
1 the surface over the deltoid muscle of the shoulder, which is mainly

concerned with raising the arm, suggests a powerful contraction of the
anterior'fascicule'. 'No one', writes Sir William Richmond, 'but a keen
observer would have recorded the pressure from a hand under the biceps
in throwing it up above the adjacent planes. One is reminded of the finer
portions of the Pan-Athenaic frieze in this noble example of relief treatment.
Probably only a highly trained eye is capable of appreciating the delicacy as
well as the grandeur of the modelling in this fine fragment!'

Many of the fragments are of too incomplete a character to throw any
definite light on the episodes to which they belong, except so far as the
violent muscular action that they display shows them to have formed part
of agonistic encounters of one kind or another.

Apart from the bull-grappling scenes, the more usual class of athletic
contests seen in Minoan small reliefs and signet-types relates rather to
boxing bouts. The violent way in which the defeated competitor is thrown
over—often with legs in the air—conveys at first sight, indeed, the idea of
one thrown in a wrestling match. Good examples of this are given on
the steatite 'rhyton' already illustrated/ from Hagia Triada, but in
such cases the attitude of the victor, with his clenched fists outstretched,

physiological side. Notes on these were
kindly supplied me by Sir William B. Rich-
mond, R.A., particularly distinguished for his
technical knowledge, and whose works cover
the domain both of painting and sculpture,
and by Professor Arthur Thomson, F.R.C.S.,
Professor of Human Anatomy in the Univer-

sity of Oxford, whose Handbook of Anatomy
for Art Shidents is a gauge of his special
competency in the present connexion.