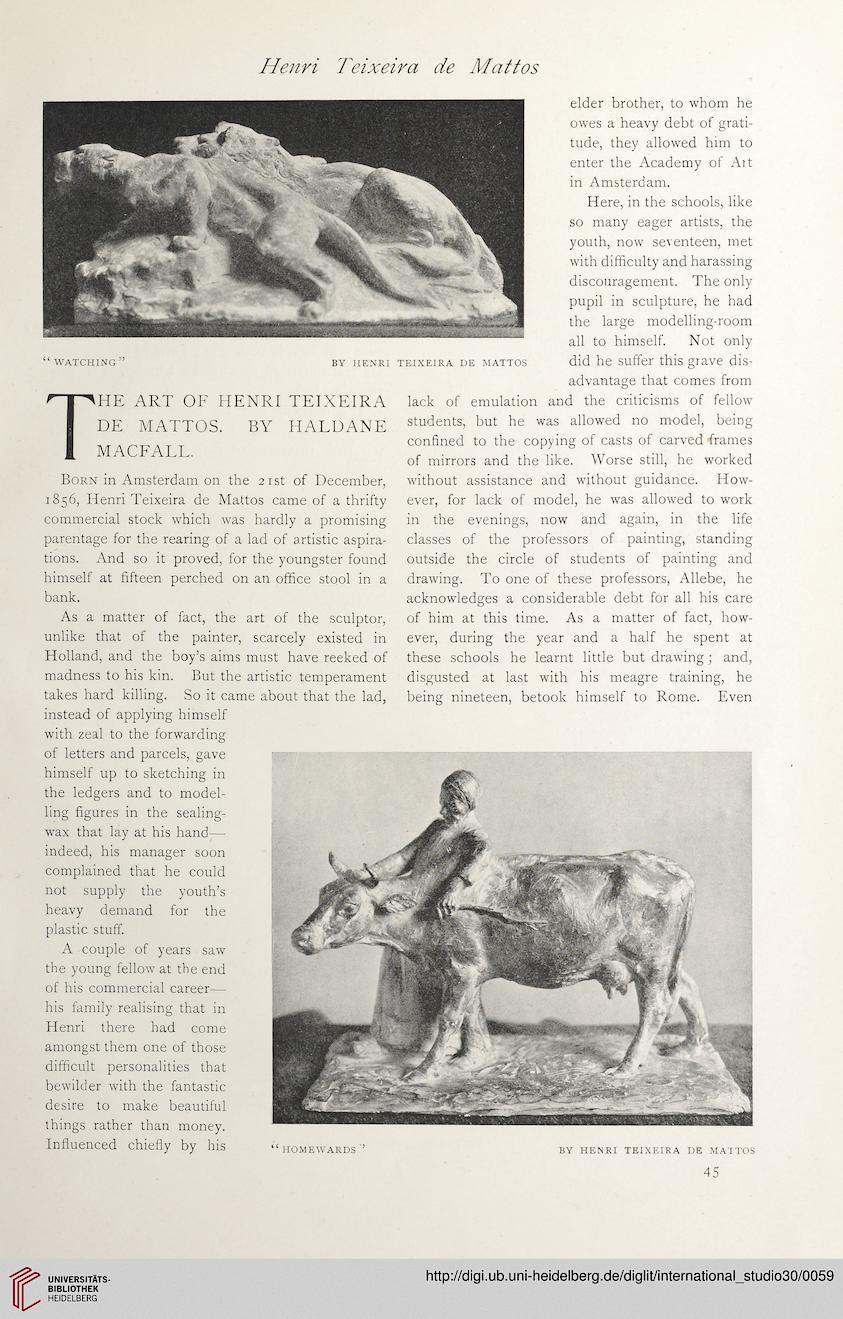 The art of henri teexeira
DE MATTOS. BY HALDANE
MACFALL.
Born in Amsterdam on the 21st of December,
1856, Henri Teixeira de Mattos came of a thrifty
commercial stock which was hardly a promising
parentage for the rearing of a lad of artistic aspira-
tions. And so it proved, for the youngster found
himself at fifteen perched on an office stool in a
bank.
As a matter of fact, the art of the sculptor,
unlike that of the painter, scarcely existed in
Holland, and the boy’s aims must have reeked of
madness to his kin. But the artistic temperament
takes hard killing. So it came about that the lad,
instead of applying himself
with zeal to the forwarding
of letters and parcels, gave
himself up to sketching in
the ledgers and to model-
ling figures in the sealing-
wax that lay at his hand—
indeed, his manager soon
complained that he could
not supply the youth’s
heavy demand for the
plastic stuff.
A couple of years saw
the young fellow at the end
of his commercial career—
his family realising that in
Henri there had come
amongst them one of those
difficult personalities that
bewilder with the fantastic
desire to make beautiful
things rather than money.
Influenced chiefly by his

elder brother, to whom he
owes a heavy debt of grati-
tude, they allowed him to
enter the Academy of Art
in Amsterdam.
Here, in the schools, like
so many eager artists, the
youth, now seventeen, met
with difficulty and harassing
discouragement. The only
pupil in sculpture, he had
the large modelling-room
all to himself. Not only
did he suffer this grave dis-
advantage that comes from
lack of emulation and the criticisms of fellow
students, but he was allowed no model, being
confined to the copying of casts of carved frames
of mirrors and the like. Worse still, he worked
without assistance and without guidance. How-
ever, for lack of model, he was allowed to work
in the evenings, now and again, in the life
classes of the professors of painting, standing
outside the circle of students of painting and
drawing. To one of these professors, Allebe, he
acknowledges a considerable debt for all his care
of him at this time. As a matter of fact, how-
ever, during the year and a half he spent at
these schools he learnt little but drawing; and,
disgusted at last with his meagre training, he
being nineteen, betook himself to Rome. Even