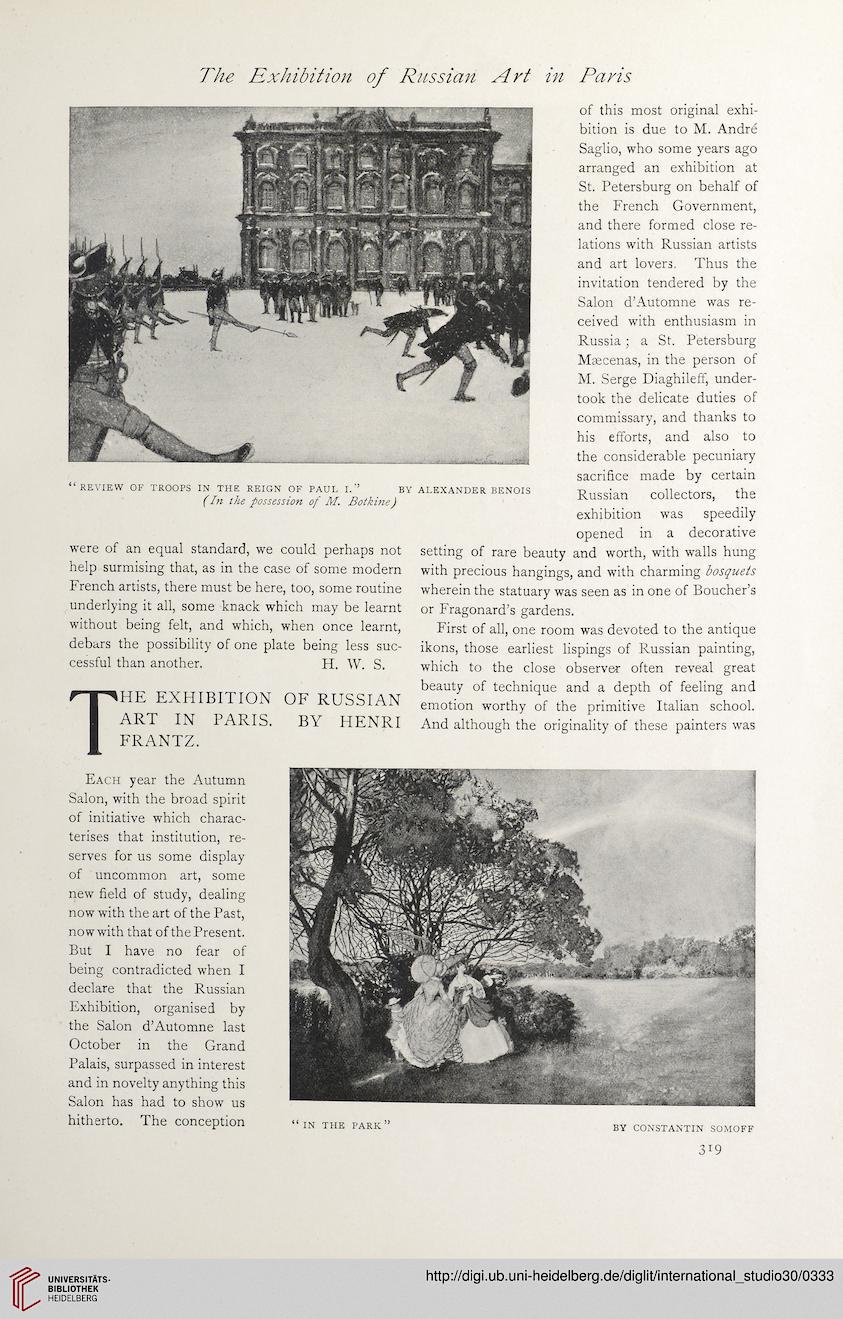 Information about OCR text
The Exhibition of Russian Art in Pans


“REVIEW OF TROOPS IN THE REIGN OF PAUL I.” BY ALEXANDER BENOIS
(In the possession of M. Botkine)

were of an equal standard, we could perhaps not
help surmising that, as in the case of some modern
French artists, there must be here, too, some routine
underlying it all, some knack which may be learnt
without being felt, and which, when once learnt,
debars the possibility of one plate being less suc-
cessful than another. H. W. S.

HE EXHIBITION OF RUSSIAN
ART IN PARIS. BY HENRI
FRANTZ.

of this most original exhi-
bition is due to M. Andre
Saglio, who some years ago
arranged an exhibition at
St. Petersburg on behalf of
the French Government,
and there formed close re-
lations with Russian artists
and art lovers. Thus the
invitation tendered by the
Salon d’Automne was re-
ceived with enthusiasm in
Russia; a St. Petersburg
Maecenas, in the person of
M. Serge Diaghileff, under-
took the delicate duties of
commissary, and thanks to
his efforts, and also to
the considerable pecuniary
sacrifice made by certain
Russian collectors, the
exhibition was speedily
opened in a decorative
setting of rare beauty and worth, with walls hung
with precious hangings, and with charming bosquets
wherein the statuary was seen as in one of Boucher’s
or Fragonard’s gardens.
First of all, one room was devoted to the antique
ikons, those earliest lispings of Russian painting,
which to the close observer often reveal great
beauty of technique and a depth of feeling and
emotion worthy of the primitive Italian school.
And although the originality of these painters was

Each year the Autumn
Salon, with the broad spirit
of initiative which charac-
terises that institution, re-
serves for us some display
of uncommon art, some
new field of study, dealing
now with the art of the Past,
no w with that of the Present.
But I have no fear of
being contradicted when I
declare that the Russian
Exhibition, organised by
the Salon d’Automne last
October in the Grand
Palais, surpassed in interest
and in novelty anything this
Salon has had to show us
hitherto. The conception “in the park” by constantin somoff