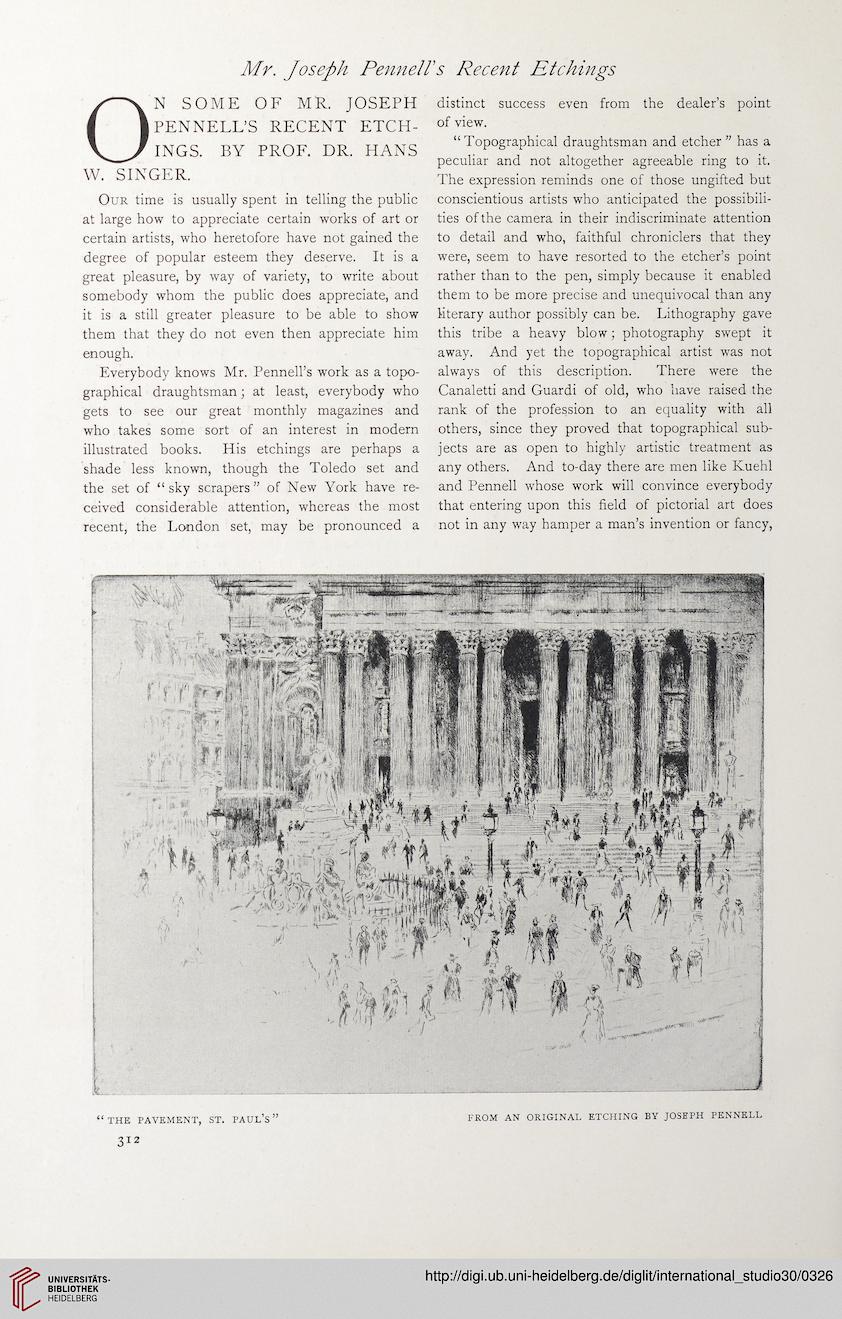 ON SOME OF MR. JOSEPH
PENNELL’S RECENT ETCH-
INGS. BY PROF. DR. HANS
W. SINGER.
Our time is usually spent in telling the public
at large how to appreciate certain works of art or
certain artists, who heretofore have not gained the
degree of popular esteem they deserve. It is a
great pleasure, by way of variety, to write about
somebody whom the public does appreciate, and
it is a still greater pleasure to be able to show
them that they do not even then appreciate him
enough.
Everybody knows Mr. Pennell’s work as a topo-
graphical draughtsman; at least, everybody who
gets to see our great monthly magazines and
who takes some sort of an interest in modern
illustrated books. His etchings are perhaps a
shade less known, though the Toledo set and
the set of “sky scrapers” of New York have re-
ceived considerable attention, whereas the most
recent, the London set, may be pronounced a

distinct success even from the dealer’s point
of view.
“ Topographical draughtsman and etcher ” has a
peculiar and not altogether agreeable ring to it.
The expression reminds one of those ungifted but
conscientious artists who anticipated the possibili-
ties of the camera in their indiscriminate attention
to detail and who, faithful chroniclers that they
were, seem to have resorted to the etcher’s point
rather than to the pen, simply because it enabled
them to be more precise and unequivocal than any
literary author possibly can be. Lithography gave
this tribe a heavy blow; photography swept it
away. And yet the topographical artist was not
always of this description. There were the
Canaletti and Guardi of old, who have raised the
rank of the profession to an equality with all
others, since they proved that topographical sub-
jects are as open to highly artistic treatment as
any others. And to-day there are men like Kuehl
and Pennell whose work will convince everybody
that entering upon this field of pictorial art does
not in any way hamper a man’s invention or fancy,

FROM AN ORIGINAL ETCHING BY JOSEPH PENNELL