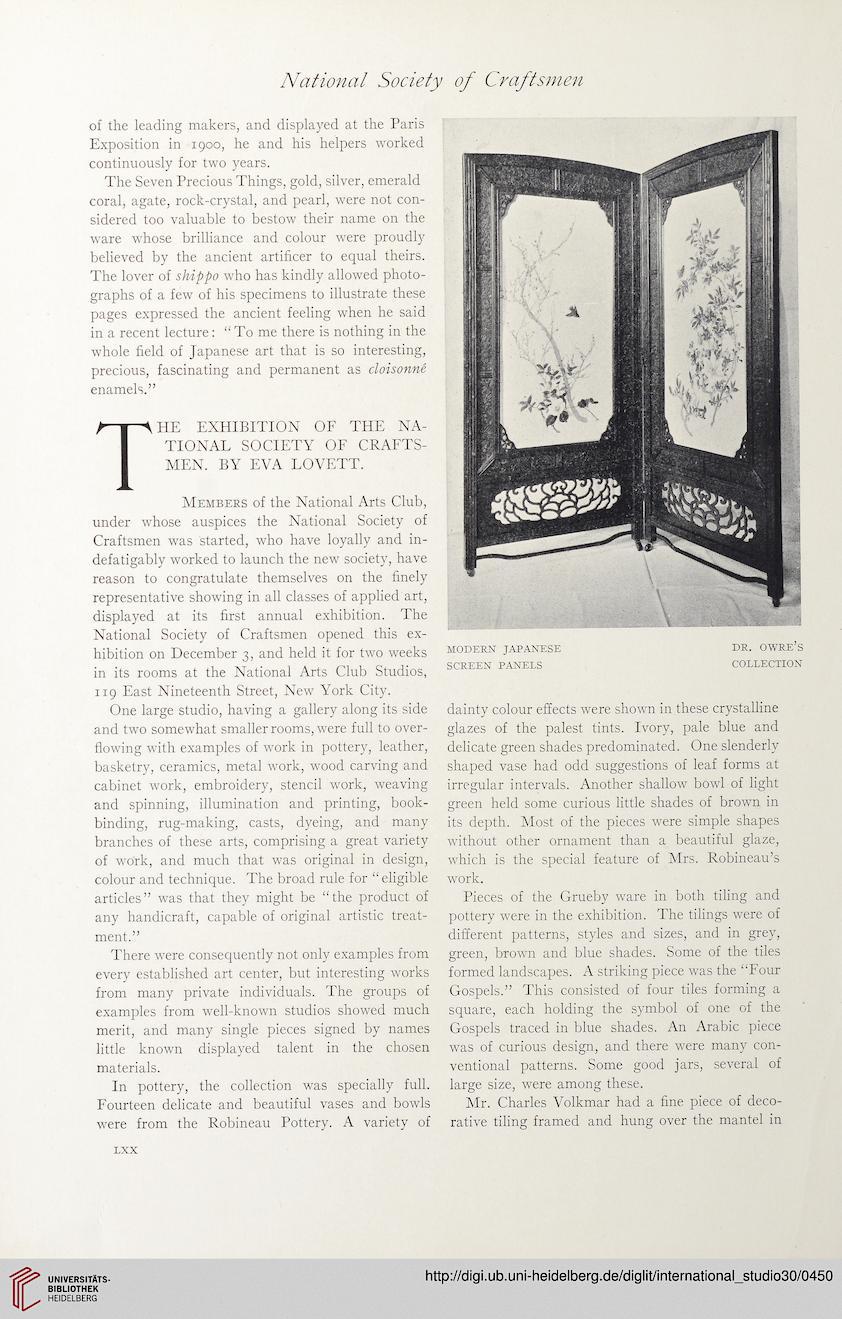 of the leading makers, and displayed at the Paris
Exposition in 1900, he and his helpers worked
continuously for two years.
The Seven Precious Things, gold, silver, emerald
coral, agate, rock-crystal, and pearl, were not con-
sidered too valuable to bestow their name on the
ware whose brilliance and colour were proudly
believed by the ancient artificer to equal theirs.
The lover of shippo who has kindly allowed photo-
graphs of a few of his specimens to illustrate these
pages expressed the ancient feeling when he said
in a recent lecture: “ To me there is nothing in the
whole field of Japanese art that is so interesting,
precious, fascinating and permanent as cloisonne
enamels.”
The exhibition of the na-
tional SOCIETY OF CRAFTS-
MEN. BY EVA LOVETT.
Members of the National Arts Club,
under whose auspices the National Society of
Craftsmen was started, who have loyally and in-
defatigably worked to launch the new society, have
reason to congratulate themselves on the finely
representative showing in all classes of applied art,
displayed at its first annual exhibition. The
National Society of Craftsmen opened this ex-
hibition on December 3, and held it for two weeks
in its rooms at the National Arts Club Studios,
119 East Nineteenth Street, New York City.
One large studio, having a gallery along its side
and two somewhat smaller rooms, were full to over-
flowing with examples of work in pottery, leather,
basketry, ceramics, metal work, wood carving and
cabinet work, embroidery, stencil work, weaving
and spinning, illumination and printing, book-
binding, rug-making, casts, dyeing, and many
branches of these arts, comprising a great variety
of work, and much that was original in design,
colour and technique. The broad rule for “eligible
articles” was that they might be “the product of
any handicraft, capable of original artistic treat-
ment.”
There were consequently not only examples from
every established art center, but interesting works
from many private individuals. The groups of
examples from well-known studios showed much
merit, and many single pieces signed by names
little known displayed talent in the chosen
materials.
In pottery, the collection was specially full.
Fourteen delicate and beautiful vases and bowls
were from the Robineau Pottery. A variety of

dainty colour effects were shown in these crystalline
glazes of the palest tints. Ivory, pale blue and
delicate green shades predominated. One slenderly
shaped vase had odd suggestions of leaf forms at
irregular intervals. Another shallow bowl of light
green held some curious little shades of brown in
its depth. Most of the pieces were simple shapes
without other ornament than a beautiful glaze,
which is the special feature of Mrs. Robineau’s
work.
Pieces of the Grueby ware in both tiling and
pottery were in the exhibition. The tilings were of
different patterns, styles and sizes, and in grey,
green, brown and blue shades. Some of the tiles
formed landscapes. A striking piece was the “Four
Gospels.” This consisted of four tiles forming a
square, each holding the symbol of one of the
Gospels traced in blue shades. An Arabic piece
was of curious design, and there were many con-
ventional patterns. Some good jars, several of
large size, were among these.
Mr. Charles Volkmar had a fine piece of deco-
rative tiling framed and hung over the mantel in