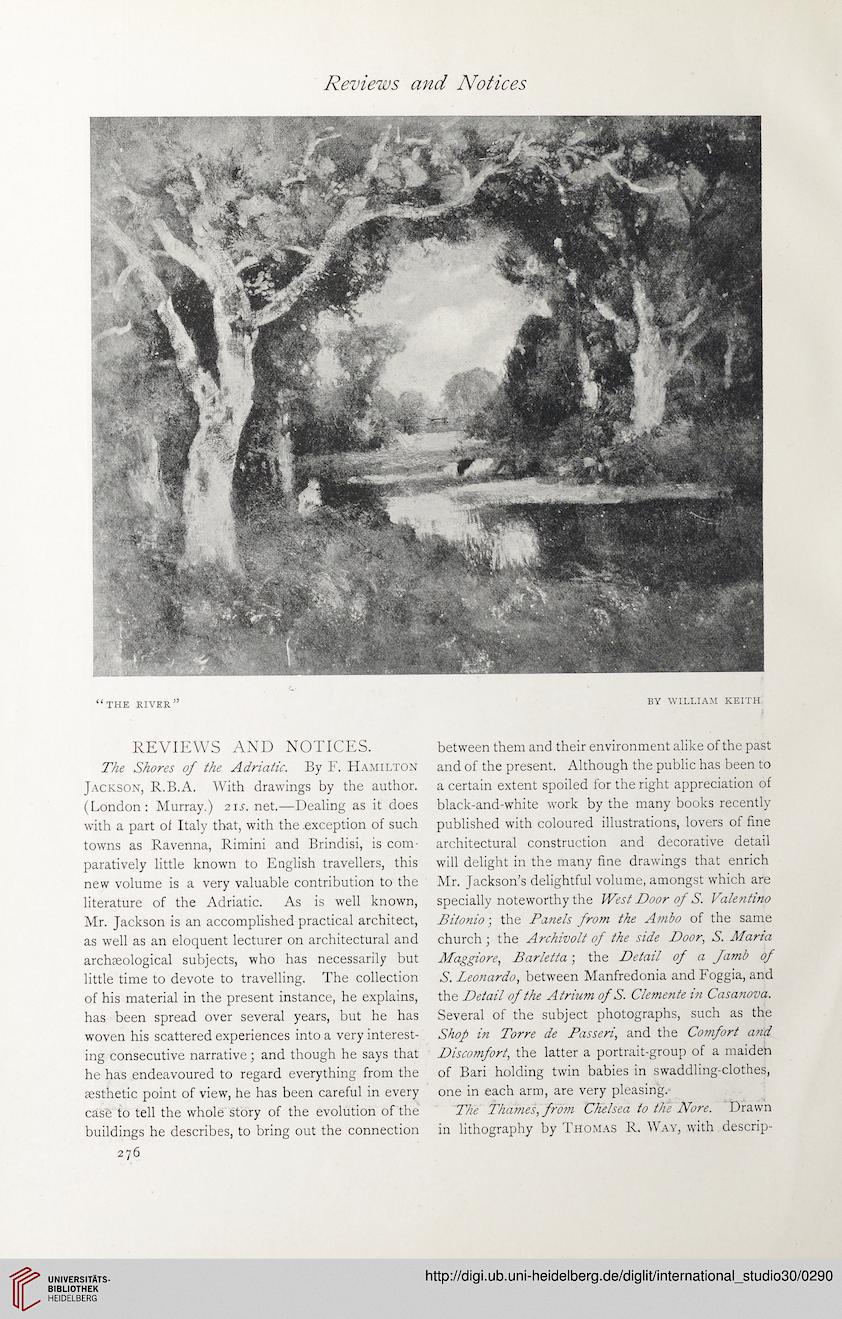 
“the river”
REVIEWS AND NOTICES.
The Shores of the Adriatic. By F. Hamilton
Jackson, R.B.A. With drawings by the author.
(London: Murray.) 215. net.—Dealing as it does
with a part of Italy that, with the .exception of such
towns as Ravenna, Rimini and Brindisi, is com-
paratively little known to English travellers, this
new volume is a very valuable contribution to the
literature of the Adriatic. As is well known,
Mr. Jackson is an accomplished practical architect,
as well as an eloquent lecturer on architectural and
archaeological subjects, who has necessarily but
little time to devote to travelling. The collection
of his material in the present instance, he explains,
has been spread over several years, but he has
woven his scattered experiences into a very interest-
ing consecutive narrative; and though he says that
he has endeavoured to regard everything from the
aesthetic point of view, he has been careful in every
case to tell the whole story of the evolution of the
buildings he describes, to bring out the connection
276

BY WILLIAM KEITH
between them and their environment alike of the past
and of the present. Although the public has been to
a certain extent spoiled for the right appreciation of
black-and-white work by the many books recently
published with coloured illustrations, lovers of fine
architectural construction and decorative detail
will delight in the many fine drawings that enrich
Mr. Jackson’s delightful volume, amongst which are
specially noteworthy the West Door of S. Valentino
Bitonio; the Panels from the Ambo of the same
church ; the Archivolt of the side Door, S. Maria
Maggiore, Barietta; the Detail of a famb of
S. Leonardo, between Manfredonia and Foggia, and
the Detail of the Atrium of S. Clemente in Casanova.
Several of the subject photographs, such as the
Shop in Torre de Fasseri, and the Comfort and
Discomfort, the latter a portrait-group of a maiden
of Bari holding twin babies in swaddling-clothes,
one in each arm, are very pleasing.
The Thames, from Chelsea to the Nore. Drawn
in lithography by Thomas R. Way, with descrip-