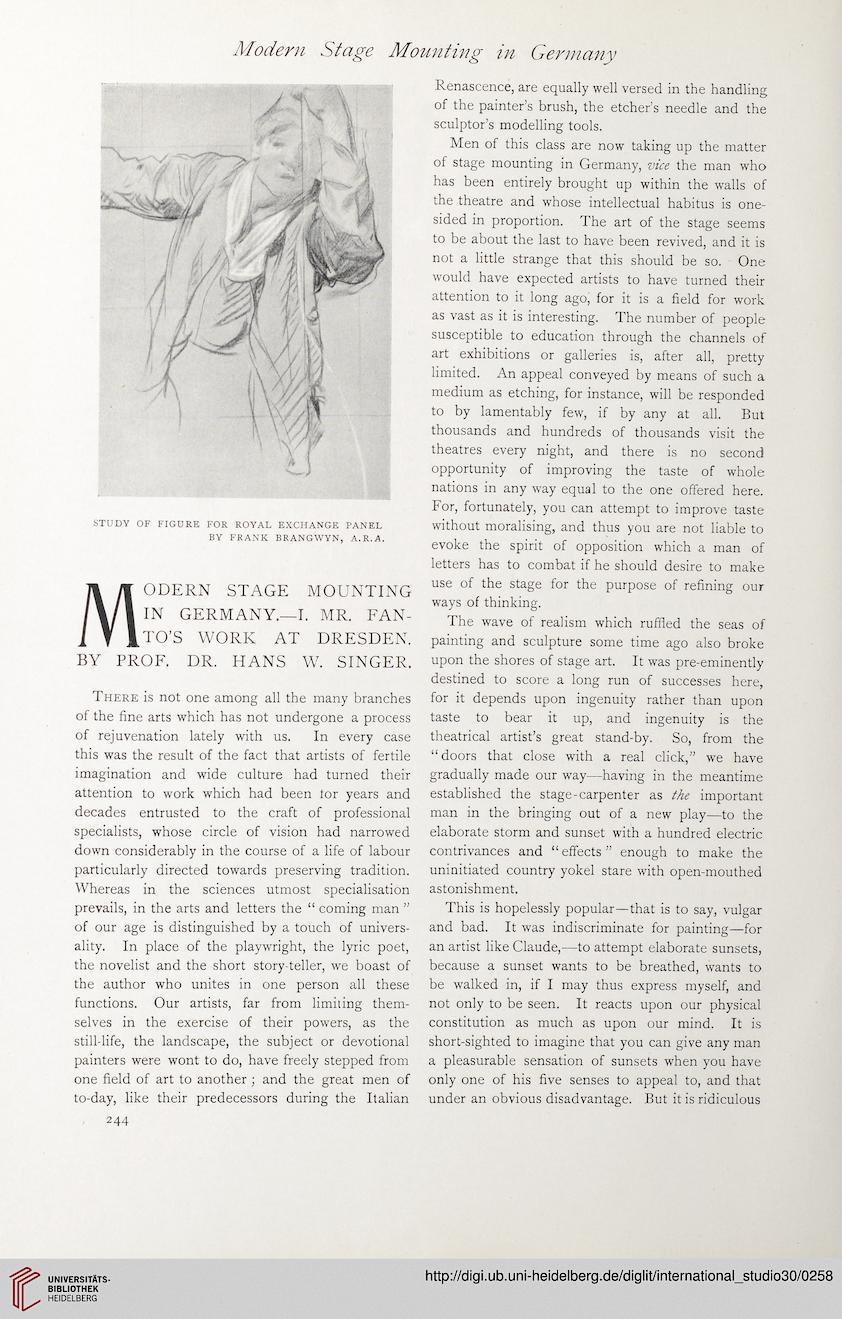 
STUDY OF FIGURE FOR ROYAL EXCHANGE PANEL
BY FRANK BRANGWYN, A.R.A.
Modern stage mounting
IN GERMANY.—I. MR. FAN-
TO’S WORK AT DRESDEN.
BY PROF. DR. HANS W. SINGER.
There is not one among all the many branches
of the fine arts which has not undergone a process
of rejuvenation lately with us. In every case
this was the result of the fact that artists of fertile
imagination and wide culture had turned their
attention to work which had been tor years and
decades entrusted to the craft of professional
specialists, whose circle of vision had narrowed
down considerably in the course of a life of labour
particularly directed towards preserving tradition.
Whereas in the sciences utmost specialisation
prevails, in the arts and letters the “ coming man ”
of our age is distinguished by a touch of univers-
ality. In place of the playwright, the lyric poet,
the novelist and the short story-teller, we boast of
the author who unites in one person all these
functions. Our artists, far from limiting them-
selves in the exercise of their powers, as the
still-life, the landscape, the subject or devotional
painters were wont to do, have freely stepped from
one field of art to another ; and the great men of
to-day, like their predecessors during the Italian

Renascence, are equally well versed in the handling
of the painter’s brush, the etcher’s needle and the
sculptor’s modelling tools.
Men of this class are now taking up the matter
of stage mounting in Germany, vice the man who
has been entirely brought up within the walls of
the theatre and whose intellectual habitus is one-
sided in proportion. The art of the stage seems
to be about the last to have been revived, and it is
not a little strange that this should be so. One
would have expected artists to have turned their
attention to it long ago, for it is a field for work
as vast as it is interesting. The number of people
susceptible to education through the channels of
art exhibitions or galleries is, after all, pretty
limited. An appeal conveyed by means of such a
medium as etching, for instance, will be responded
to by lamentably few, if by any at all. But
thousands and hundreds of thousands visit the
theatres every night, and there is no second
opportunity of improving the taste of whole
nations in any way equal to the one offered here.
For, fortunately, you can attempt to improve taste
without moralising, and thus you are not liable to
evoke the spirit of opposition which a man of
letters has to combat if he should desire to make
use of the stage for the purpose of refining our
ways of thinking.
The wave of realism which ruffled the seas of
painting and sculpture some time ago also broke
upon the shores of stage art. It was pre-eminently
destined to score a long run of successes here,
for it depends upon ingenuity rather than upon
taste to bear it up, and ingenuity is the
theatrical artist’s great stand-by. So, from the
“doors that close with a real click,” we have
gradually made our way—having in the meantime
established the stage-carpenter as the important
man in the bringing out of a new play—to the
elaborate storm and sunset with a hundred electric
contrivances and “ effects ” enough to make the
uninitiated country yokel stare with open-mouthed
astonishment.
This is hopelessly popular—that is to say, vulgar
and bad. It was indiscriminate for painting—for
an artist like Claude,—to attempt elaborate sunsets,
because a sunset wants to be breathed, wants to
be walked in, if I may thus express myself, and
not only to be seen. It reacts upon our physical
constitution as much as upon our mind. It is
short-sighted to imagine that you can give any man
a pleasurable sensation of sunsets when you have
only one of his five senses to appeal to, and that
under an obvious disadvantage. But it is ridiculous