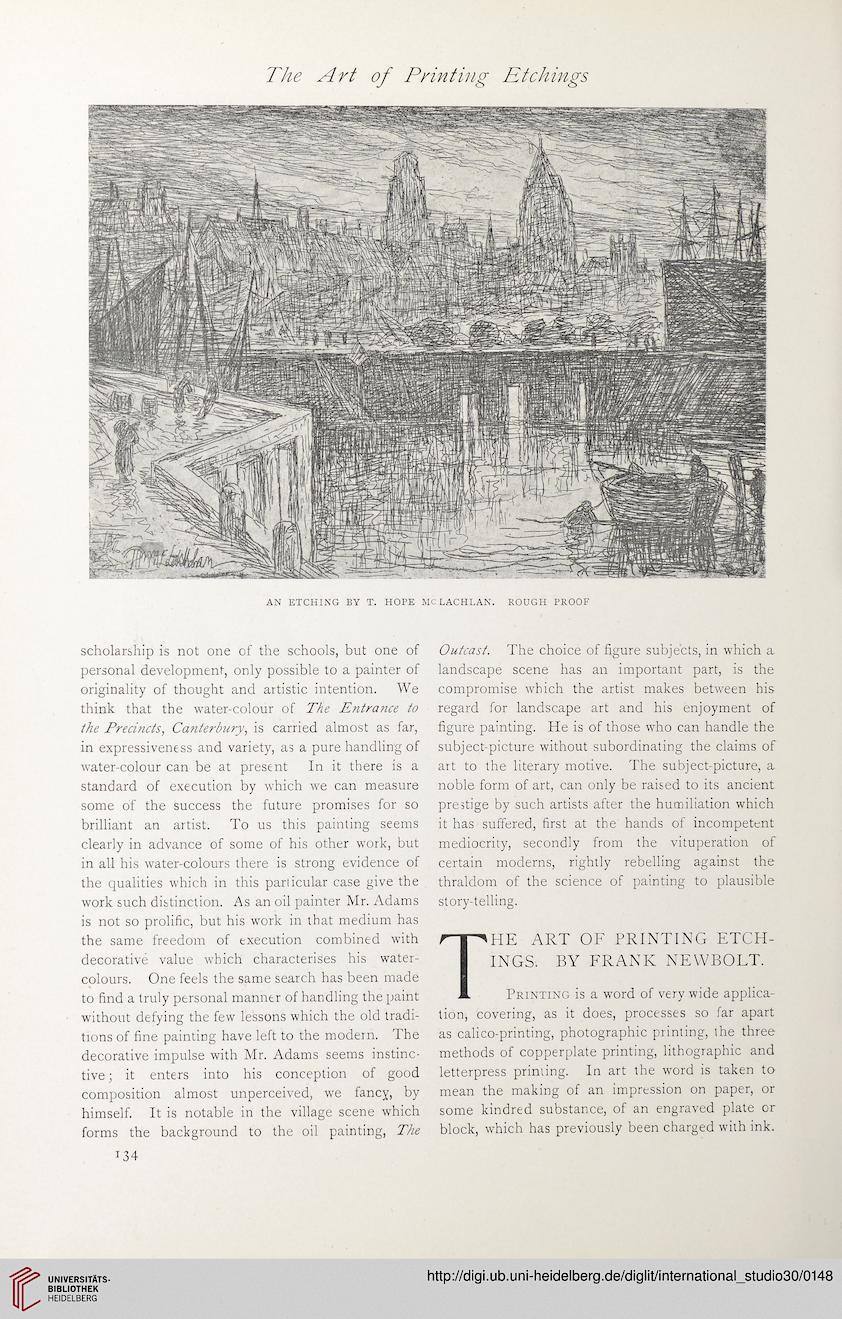 Information about OCR text
The Art of Printing Etchings

scholarship is not one of the schools, but one of
personal development, only possible to a painter of
originality of thought and artistic intention. We
think that the water-colour of The Entrance to
the Precincts, Canterbury, is carried almost as far,
in expressiveness and variety, as a pure handling of
water-colour can be at present In it there is a
standard of execution by which we can measure
some of the success the future promises for so
brilliant an artist. To us this painting seems
clearly in advance of some of his other work, but
in all his water-colours there is strong evidence of
the qualities which in this particular case give the
work such distinction. As an oil painter Mr. Adams
is not so prolific, but his work in that medium has
the same freedom of execution combined with
decorative value which characterises his water-
colours. One feels the same search has been made
to find a truly personal manner of handling the paint
without defying the few lessons which the old tradi-
tions of fine painting have left to the modern. The
decorative impulse with Mr. Adams seems instinc-
tive ; it enters into his conception of good
composition almost unperceived, we fancy, by
himself. It is notable in the village scene which
forms the background to the oil painting, The

Outcast. The choice of figure subjects, in which a
landscape scene has an important part, is the
compromise which the artist makes between his
regard for landscape art and his enjoyment of
figure painting. He is of those who can handle the
subject-picture without subordinating the claims of
art to the literary motive. The subject-picture, a
noble form of art, can only be raised to its ancient
prestige by such artists after the humiliation which
it has suffered, first at the hands of incompetent
mediocrity, secondly from the vituperation of
certain moderns, rightly rebelling against the
thraldom of the science of painting to plausible
story-telling.
HE ART OF PRINTING ETCH-
INGS. BY FRANK NEWBOLT.
Printing is a word of very wide applica-
tion, covering, as it does, processes so far apart
as calico-printing, photographic printing, the three
methods of copperplate printing, lithographic and
letterpress printing. In art the wrord is taken to
mean the making of an impression on paper, or
some kindred substance, of an engraved plate or
block, which has previously been charged with ink.