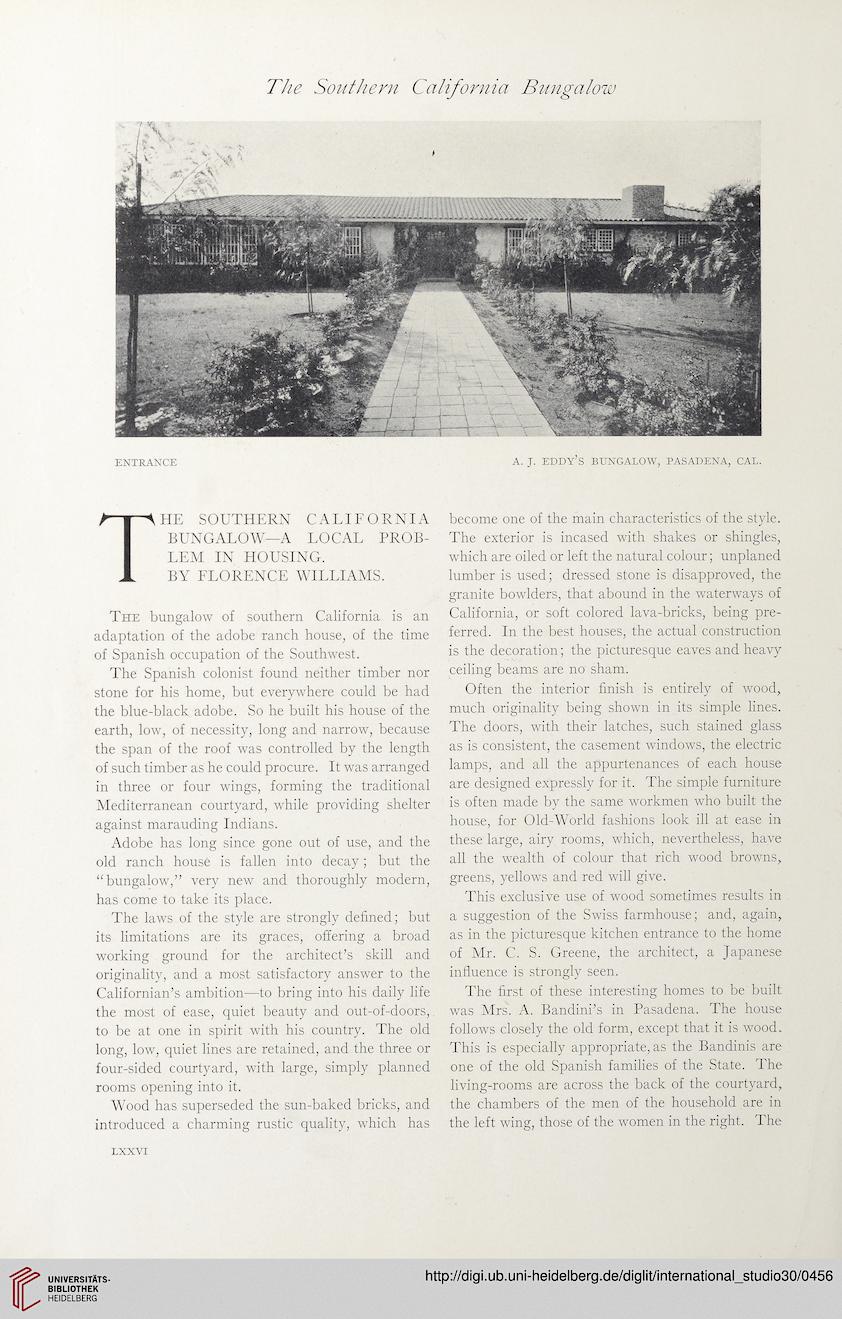 The southern California
BUNGALOW—A LOCAL PROB-
LEM IN HOUSING.
BY FLORENCE WILLIAMS.
The bungalow of southern California is an
adaptation of the adobe ranch house, of the time
of Spanish occupation of the Southwest.
The Spanish colonist found neither timber nor
stone for his home, but everywhere could be had
the blue-black adobe. So he built his house of the
earth, low, of necessity, long and narrow, because
the span of the roof was controlled by the length
of such timber as he could procure. It was arranged
in three or four wings, forming the traditional
Mediterranean courtyard, while providing shelter
against marauding Indians.
Adobe has long since gone out of use, and the
old ranch house is fallen into decay; but the
“bungalow,” very new and thoroughly modern,
has come to take its place.
The laws of the style are strongly defined; but
its limitations are its graces, offering a broad
working ground for the architect’s skill and
originality, and a most satisfactory answer to the
Californian’s ambition—to bring into his daily life
the most of ease, quiet beauty and out-of-doors,
to be at one in spirit with his country. The old
long, low, quiet lines are retained, and the three or
four-sided courtyard, with large, simply planned
rooms opening into it.
Wood has superseded the sun-baked bricks, and
introduced a charming rustic quality, which has

become one of the main characteristics of the style.
The exterior is incased with shakes or shingles,
which are oiled or left the natural colour; unplaned
lumber is used; dressed stone is disapproved, the
granite bowlders, that abound in the waterways of
California, or soft colored lava-bricks, being pre-
ferred. In the best houses, the actual construction
is the decoration; the picturesque eaves and heavy
ceiling beams are no sham.
Often the interior finish is entirely of wood,
much originality being shown in its simple lines.
The doors, with their latches, such stained glass
as is consistent, the casement windows, the electric
lamps, and all the appurtenances of each house
are designed expressly for it. The simple furniture
is often made by the same workmen who built the
house, for Old-World fashions look ill at ease in
these large, airy rooms, which, nevertheless, have
all the wealth of colour that rich wood browns,
greens, yellows and red will give.
This exclusive use of wood sometimes results in
a suggestion of the Swiss farmhouse; and, again,
as in the picturesque kitchen entrance to the home
of Mr. C. S. Greene, the architect, a Japanese
influence is strongly seen.
The first of these interesting homes to be built
was Mrs. A. Bandini’s in Pasadena. The house
follows closely the old form, except that it is wood.
This is especially appropriate, as the Bandinis are
one of the old Spanish families of the State. The
living-rooms are across the back of the courtyard,
the chambers of the men of the household are in
the left wing, those of the women in the right. The