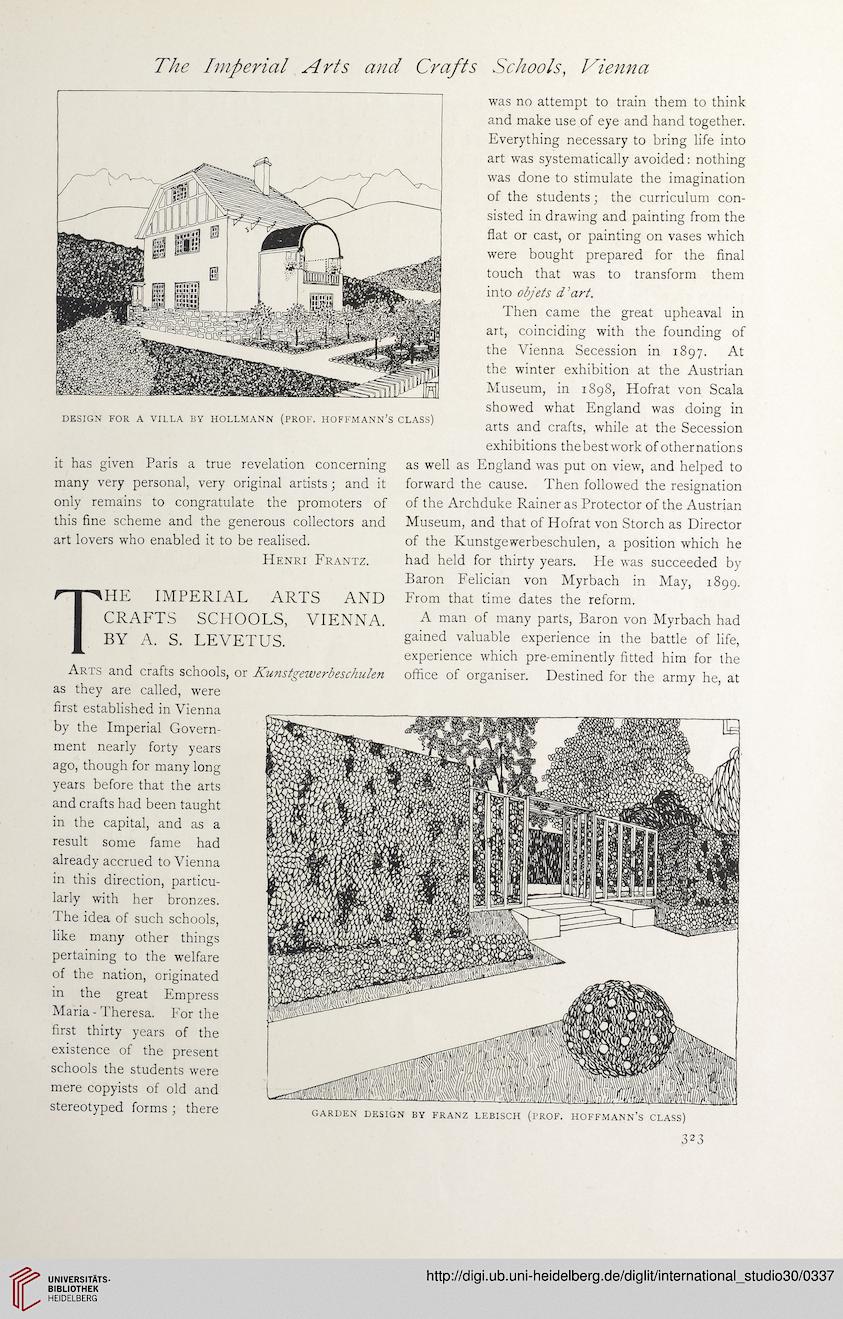 
it has given Paris a true revelation concerning
many very personal, very original artists; and it
only remains to congratulate the promoters of
this fine scheme and the generous collectors and
art lovers who enabled it to be realised.
Henri Frantz.
HE IMPERIAL ARTS AND
CRAFTS SCHOOLS, VIENNA.
BY A. S. LEVETUS.
Arts and crafts schools, or Kunstgewerbeschulen
as they are called, were
first established in Vienna
by the Imperial Govern-
ment nearly forty years
ago, though for many long
years before that the arts
and crafts had been taught
in the capital, and as a
result some fame had
already accrued to Vienna
in this direction, particu-
larly with her bronzes.
The idea of such schools,
like many other things
pertaining to the welfare
of the nation, originated
in the great Empress
Maria - Theresa. For the
first thirty years of the
existence of the present
schools the students were
mere copyists of old and
stereotyped forms ; there

was no attempt to train them to think
and make use of eye and hand together.
Everything necessary to bring life into
art was systematically avoided: nothing
was done to stimulate the imagination
of the students; the curriculum con-
sisted in drawing and painting from the
flat or cast, or painting on vases which
were bought prepared for the final
touch that was to transform them
into objets d 'art.
Then came the great upheaval in
art, coinciding with the founding of
the Vienna Secession in 1897. At
the winter exhibition at the Austrian
Museum, in 1898, Hofrat von Scala
showed what England was doing in
arts and crafts, while at the Secession
exhibitions thebestwork of othernations
as well as England was put on view, and helped to
forward the cause. Then followed the resignation
of the Archduke Rainer as Protector of the Austrian
Museum, and that of Hofrat von Storch as Director
of the Kunstgewerbeschulen, a position which he
had held for thirty years. Fie was succeeded by
Baron Felician von Myrbach in May, 1899.
From that time dates the reform.
A man of many parts, Baron von Myrbach had
gained valuable experience in the battle of life,
experience which pre-eminently fitted him for the
office of organiser. Destined for the army he, at