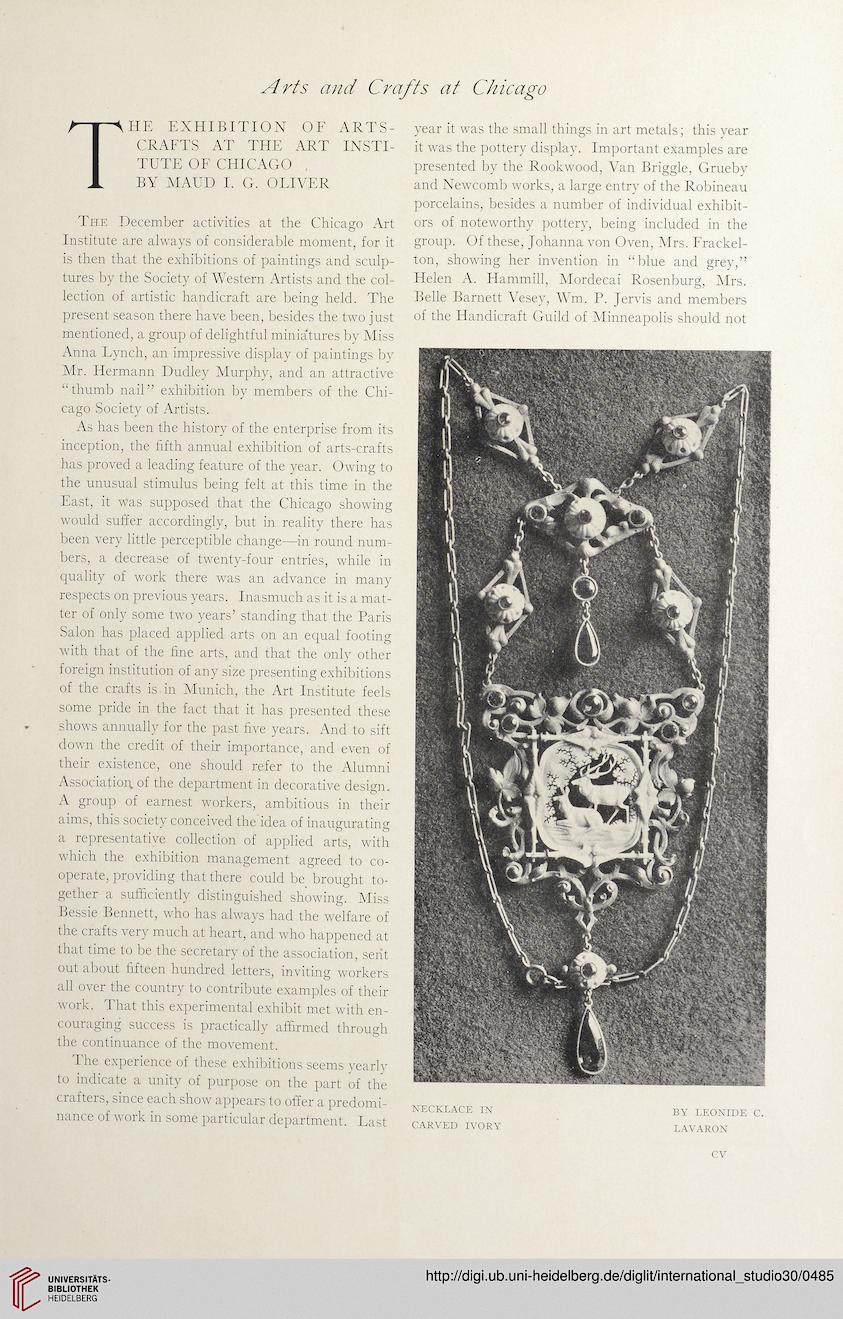 Information about OCR text
Arts and Crafts at Chicago


The exhibition of arts-
CRAFTS AT THE ART INSTI-
TUTE OF CHICAGO
BY MAUD I. G. OLIVER
The December activities at the Chicago Art
Institute are always of considerable moment, for it
is then that the exhibitions of paintings and sculp-
tures by the Society of Western Artists and the col-
lection of artistic handicraft are being held. The
present season there have been, besides the two just
mentioned, a group of delightful miniatures by Miss
Anna Lynch, an impressive display of paintings by
Mr. Hermann Dudley Murphy, and an attractive
“thumb nail” exhibition by members of the Chi-
cago Society of Artists.
As has been the history of the enterprise from its
inception, the fifth annual exhibition of arts-crafts
has proved a leading feature of the year. Owing to
the unusual stimulus being felt at this time in the
East, it was supposed that the Chicago showing
would suffer accordingly, but in reality there has
been very little perceptible change—in round num-
bers, a decrease of twenty-four entries, while in
quality of work there was an advance in many
respects on previous years. Inasmuch as it is a mat-
ter of only some two years’ standing that the Paris
Salon has placed applied arts on an equal footing
with that of the fine arts, and that the only other
foreign institution of any size presenting exhibitions
of the crafts is in Munich, the Art Institute feels
some pride in the fact that it has presented these
shows annually for the past five years. And to sift
down the credit of their importance, and even of
their existence, one should refer to the Alumni
Association, of the department in decorative design.,
A group of earnest workers, ambitious in their
aims, this society conceived the idea of inaugurating
a representative collection of applied arts, with
which the exhibition management agreed to co-
operate, providing that there could be brought to-
gether a sufficiently distinguished showing. Miss
Bessie Bennett, who has always had the welfare of
the crafts very much at heart, and who happened at
that time to be the secretary of the association, sent
out about fifteen hundred letters, inviting workers
all over the country to contribute examples of their
work. That this experimental exhibit met with en-
couraging success is practically affirmed through
the continuance of the movement.
The experience of these exhibitions seems yearly
to indicate a unity of purpose on the part of the
crafters, since each show appears to offer a predomi-
nance of work in some particular department. Last

year it was the small things in art metals; this year
it was the pottery display. Important examples are
presented by the Rookwood, Van Briggle, Grueby
and Newcomb works, a large entry of the Robineau
porcelains, besides a number of individual exhibit-
ors of noteworthy pottery, being included in the
group. Of these, Johanna von Oven, Mrs. Frackel-
ton, showing her invention in “blue and grey,”
Helen A. Hammill, Mordecai Rosenburg, Mrs.
Belle Barnett Vesey, Wm. P. Jervis and members
of the Handicraft Guild of Minneapolis should not