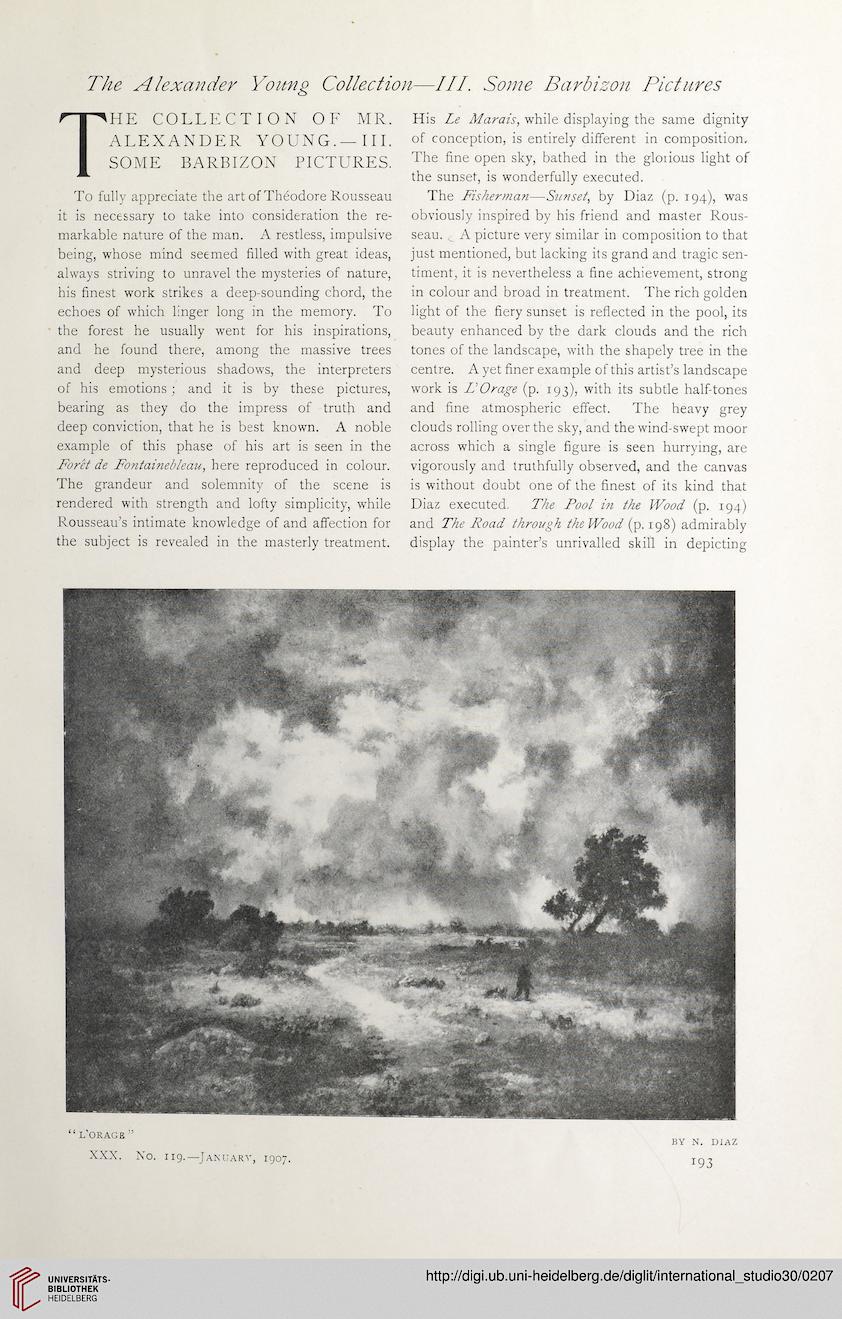 The collection ol mr.
ALEXANDER YOUNG.—III.
SOME BARBIZON PICTURES.
To fully appreciate the art of Theodore Rousseau
it is necessary to take into consideration the re-
markable nature of the man. A restless, impulsive
being, whose mind seemed filled with great ideas,
always striving to unravel the mysteries of nature,
his finest work strikes a deep-sounding chord, the
echoes of which linger long in the memory. To
the forest he usually went for his inspirations,
and he found there, among the massive trees
and deep mysterious shadows, the interpreters
of his emotions; and it is by these pictures,
bearing as they do the impress of truth and
deep conviction, that he is best known. A noble
example of this phase of his art is seen in the
Foret de Fontainebleau, here reproduced in colour.
The grandeur and solemnity of the scene is
rendered with strength and lofty simplicity, while
Rousseau’s intimate knowledge of and affection for
the subject is revealed in the masterly treatment.

His Le Marais, while displaying the same dignity
of conception, is entirely different in composition.
The fine open sky, bathed in the glorious light of
the sunset, is wonderfully executed.
The Fisherman—Sunset, by Diaz (p. 194), was
obviously inspired by his friend and master Rous-
seau. c A picture very similar in composition to that
just mentioned, but lacking its grand and tragic sen-
timent, it is nevertheless a fine achievement, strong
in colour and broad in treatment. The rich golden
light of the fiery sunset is reflected in the pool, its
beauty enhanced by the dark clouds and the rich
tones of the landscape, with the shapely tree in the
centre. A yet finer example of this artist’s landscape
work is FOrage (p. 193), with its subtle half-tones
and fine atmospheric effect. The heavy grey
clouds rolling over the sky, and the wind-swept moor
across which a single figure is seen hurrying, are
vigorously and truthfully observed, and the canvas
is without doubt one of the finest of its kind that
Diaz executed. The Pool in the Wood (p. 194)
and The Road through the Wood (p. 198) admirably
display the painter’s unrivalled skill in depicting