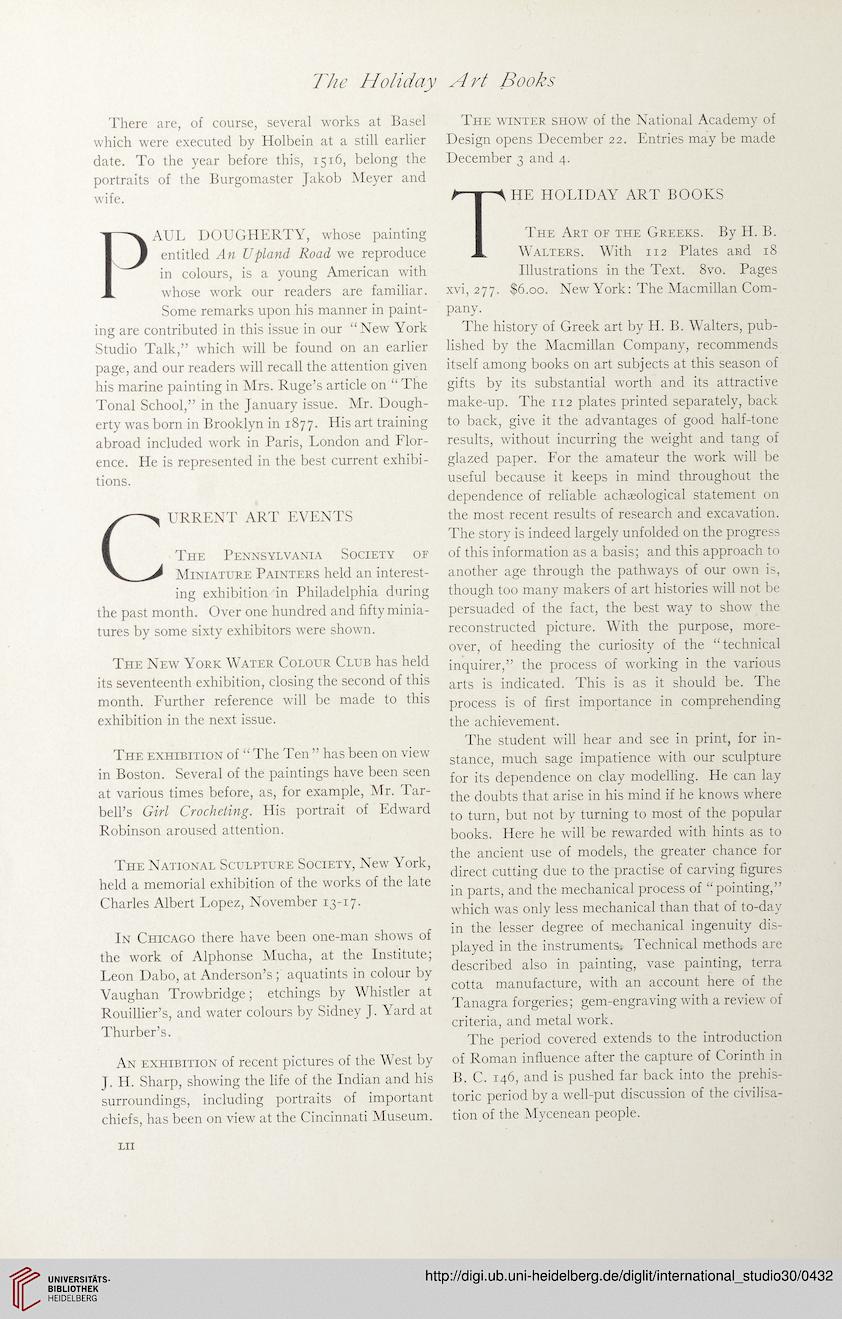 There are, of course, several works at Basel
which were executed by Holbein at a still earlier
date. To the year before this, 1516, belong the
portraits of the Burgomaster Jakob Meyer and
wife.

PAUL DOUGHERTY, whose painting
entitled An Upland Road we reproduce
in colours, is a young American with
whose work our readers are familiar.
Some remarks upon his manner in paint-
ing are contributed in this issue in our “New York
Studio Talk,” which will be found on an earlier
page, and our readers will recall the attention given
his marine painting in Mrs. Ruge’s article on “ The
Tonal School,” in the January issue. Mr. Dough-
erty was born in Brooklyn in 1877. His art training
abroad included work in Paris, London and Flor-
ence. He is represented in the best current exhibi-
tions.

CURRENT ART EVENTS
The Pennsylvania Society of
Miniature Painters held an interest-
ing exhibition in Philadelphia during
the past month. Over one hundred and fifty minia-
tures by some sixty exhibitors were shown.

The New York Water Colour Club has held
its seventeenth exhibition, closing the second of this
month. Further reference will be made to this
exhibition in the next issue.

The exhibition of “ The Ten ” has been on view
in Boston. Several of the paintings have been seen
at various times before, as, for example, Mr. Tar-
bell’s Girl Crocheting. His portrait of Edward
Robinson aroused attention.
The National Sculpture Society, New York,
held a memorial exhibition of the works of the late
Charles Albert Lopez, November 13-17.
In Chicago there have been one-man shows of
the work of Alphonse Mucha, at the Institute;
Leon Dabo, at Anderson’s; aquatints in colour by
Vaughan Trowbridge; etchings by Whistler at
Rouillier’s, and water colours by Sidney J. Yard at
Thurber’s.
An exhibition of recent pictures of the West by
J. PL Sharp, showing the life of the Indian and his
surroundings, including portraits of important
chiefs, has been on view at the Cincinnati Museum.
LII

The winter show of the National Academy of
Design opens December 22. Entries may be made
December 3 and 4.

xvi, 277.
pany.
The history of Greek art by H. B. Walters, pub-
lished by the Macmillan Company, recommends
itself among books on art subjects at this season of
gifts by its substantial worth and its attractive
make-up. The 112 plates printed separately, back
to back, give it the advantages of good half-tone
results, without incurring the weight and tang of
glazed paper. For the amateur the work will be
useful because it keeps in mind throughout the
dependence of reliable achaeological statement on
the most recent results of research and excavation.
The story is indeed largely unfolded on the progress
of this information as a basis; and this approach to
another age through the pathways of our own is,
though too many makers of art histories will not be
persuaded of the fact, the best way to show the
reconstructed picture. With the purpose, more-
over, of heeding the curiosity of the “technical
inquirer,” the process of working in the various
arts is indicated. This is as it should be. The
process is of first importance in comprehending
the achievement.
The student will hear and see in print, for in-
stance, much sage impatience with our sculpture
for its dependence on clay modelling. He can lay
the doubts that arise in his mind if he knows where
to turn, but not by turning to most of the popular
books. Here he will be rewarded with hints as to
the ancient use of models, the greater chance for
direct cutting due to the practise of carving figures
in parts, and the mechanical process of “pointing,”
which was only less mechanical than that of to-day
in the lesser degree of mechanical ingenuity dis-
played in the instruments. Technical methods are
described also in painting, vase painting, terra
cotta manufacture, with an account here of the
Tanagra forgeries; gem-engraving with a review of
criteria, and metal work.
The period covered extends to the introduction
of Roman influence after the capture of Corinth in
B. C. 146, and is pushed far back into the prehis-
toric period by a well-put discussion of the civilisa-
tion of the Mycenean people.